Inside the Corus Quay Building

The Corus Quay Building at Queen's Quay and Jarvis, right next to Sugar Beach, is one of the new gems on the Doors Open list of buildings for 2011. This is one of my favourite buildings in Toronto - and not just because it has an indoor slide! Corus Entertainment worked with Quadrangle Architects, who designed the interior of the building, to do some pretty innovative stuff. Oddly, Corus doesn't really seem to want to gloat about it.

Doors Open guests aren't given much access to the building - they're limited to roaming the main floor - and the tour is self-guided so there is a lot of necessary commentary missing. The only saving grace is the presentations about the building, given every hour on the hour. Not surprisingly, they're well attended. 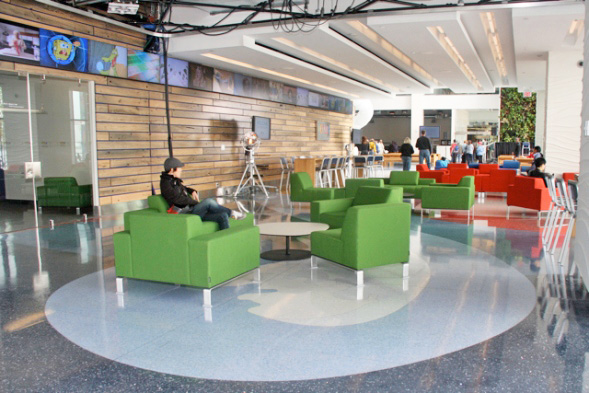 The building is surprisingly playful with many colourful lounges peppered around its open areas, the best of which is located atop the main TV studio in the middle of the atrium. It has foosball tables, a flat-screen TV, couches, and the famous slide that leads to the main floor. Miraculously, the sound on top doesn't make it into the studios! The entire building has Wi-Fi so employees can work anywhere - including the studio-top lounge or rooftop patio - but I would probably spend my days in one of the Muskoka chairs on the indoor sundeck overlooking the Lake. Unfortunately, none of this is visible from the main floor.

From the main floor, visitors are able to peak into the TV studios and check out some of the technical equipment. Most rooms in the building are walled by clear glass, so the guts of broadcasting really get put on display and celebrated. The Edge radio studio, which opens up to Sugar Beach for concerts, unfortunately isn't accessible for Doors Open. In their defence, though, it's probably in use. 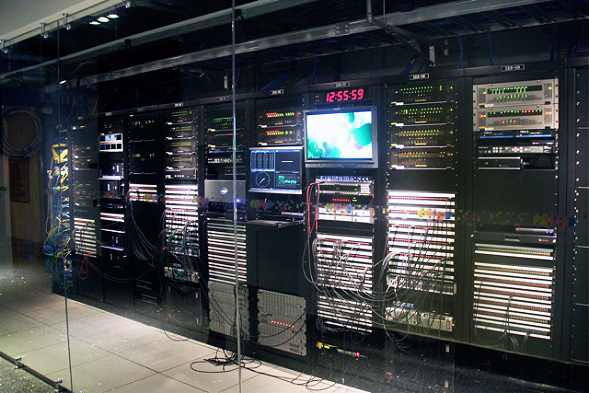 Also prominently displayed are the building's green attributes. A huge bio-filter "living wall" (growing many different plant species) accents the atrium, which takes full advantage of the building's floor-to-ceiling windows that allow in as much natural light as possible. Quadrangle used a ton of recycled material for the interior, most notably, recovered hemlock wood from the Queen's Wharf Ferry Terminal that ornaments the atrium. The carpets are also recycled and insulation in the walls is made of old jeans! Given that Corus Quay is the first broadcasting facility to attempt LEED certification, there are too many examples of sustainable design to mention.

Corus offers their own guided tours of the entire building twice a month, and these would likely prove more fulfilling. It's a shame Corus didn't want to show off such an alluring addition to the waterfront during Doors Open. That said, without scheduled tours there isn't much of a line so it's still worth walking through after waiting in the line at Redpath Sugar next door. 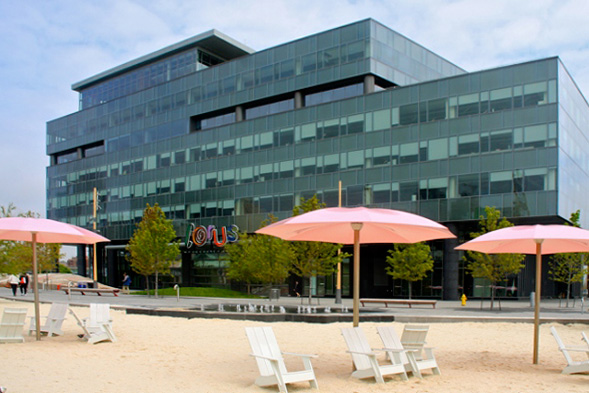