Federal election results for 2011 have started to roll in. As polls close across Canada, we'll share Toronto-specific and other noteworthy results with updates in reverse order. For a comprehensive survey of country-wide results, please visit the Elections Canada live page.

Here's a quick look at some almost final (but still unofficial results):

Voter turnout country-wide hovers at 61.4% with almost all polls reporting (it won't change much now).

Here's how Toronto played out: 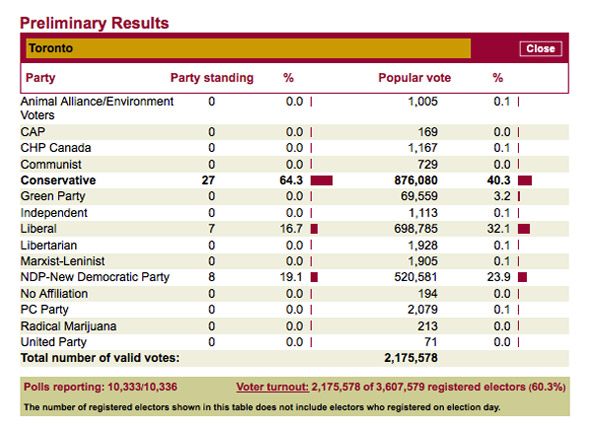 Despite the fall of fortress Toronto for the Liberals, they still managed 32.1% of the popular vote (significantly higher than the NDP at 23.9%). Complaints of vote-splitting are obviously going around.

Not final, but here are the last numbers of the night:

Here's an (updated) comparison of the Toronto riding breakdown between 2008 and 2011: 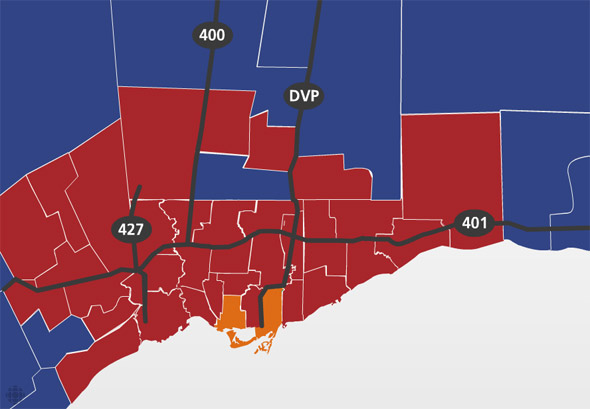 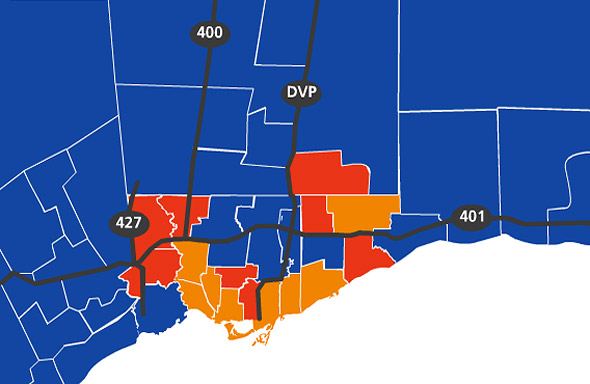 Harper looks relieved. This has been a long wait for him and his party.

CBC and Globe predict that when it's all said and done, voter turnout will hover around 61%, slightly up from last time (59% in 2008).

So, to be fair to Rob Ford, maybe endorsing Harper will pay dividends now that Ford Country has given the Cons a strong mandate in the 905 and outer 416. Maybe?

Layton wants "a Canada where no one is left behind."

"You can count on us [the NDP] to ensure that parliament is addressing the needs of new Canadians."

Layton holds off the gloating when genuinely offering congratulations to Michael Ignatieff and Gilles Duceppe. But he is really happy to congratulate May.

"My friends, for the first time in our history, Canadians have asked us to serve as the official opposition."

No surprises here â Duceppe steps down as Bloc leader. He loses even bigger than Ignatieff tonight, if that's possible.

So as we wait for a victorious Jack, here's my question: what happens to Toronto if Hudak wins the next provincial election? Ford, Hudak, Harper? Are you ready TO? Just think about all the anti-government graffiti coverage blogTO will have!

It looks like Elizabeth May is going to get the Greens a seat.

So will Justin Trudeau be the next leader of the Liberal Democrats (or some such party)?

Peter Mansbridge asks Bob Rae about merger with NDP. He doesn't really answer, but says that his party needs to "have a discussion" about the future, that a dialogue needs to start. Sounds like he'd be willing, but doesn't want to mortgage his future with such talk.

Elizabeth May is leading in her riding, but it remains early out there.

So does this mean that Canadian social values can now be accurately described as conservative? Or does the rise of the NDP mute any of that talk?

Outside of Toronto, but Gilles Duceppe is done. Anyone remember how fiery he was at the English-language debate? Things change fast.

Cash doubles up on Liberal incumbent (Mario Silva) in Davenport. Everyone thought it'd be way closer than that. 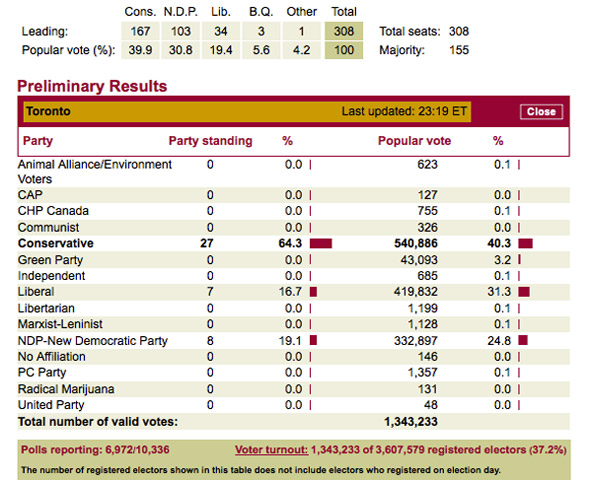 Another look at the Toronto overview. Starting work on individual ridings!

"I want to offer sincere congratulations to two opponents have had the better of the night... Democracy teaches hard lessons... We have to read the lessons that Canadians have our taught us tonight.... I accept my responsibility for what has transpired tonight."

Sounds like he is done. Not a surprise. But what about the party?

Nevertheless, I admire his graciousness.

"I will serve as long as the party asks me to serve and not a moment longer."

Oliva Chow on at the podium at NDP headquarters, thanking Trinity-Spadina. Jack is next. They're pretty happy over there. And, hey, it's off to Stornoway!

According to the CBC Rob Ford has sent a note of congratulations to Stephen Harper. But of course...

Conservatives have taken three quarters of the seats in Ontario, which represents an increase of 19 seats.

Hard to keep up! Ken Dryden, my former baseball coach, has lost his riding in York Centre. Conservative Mark Adler takes the win.

In case you're not in front of a TV. Here's the national breakdown right now:

Bob Rae just finished talking about rebuilding the Liberal party. He currently holds a narrow lead in Toronto-Centre over the NDP Candidate.

Here's something that you can do what you like with. Due to federal election laws, there won't be another election until 2015. Four more years...

And because we ponied up, the CBC gets on board and declares the Conservatives winners of a majority. Where's my sarcmark?

Okay, fuck it. If no one else will do it, I will. blogTO predicts Conservative majority in 2011 Canadian election. You heard it here first, folks.

Some CBC-declared winners in the GTA:

Pretty much all the major broadcasters have declared the NDP the official opposition, though we're still waiting on an announcement on a Conservative majority. 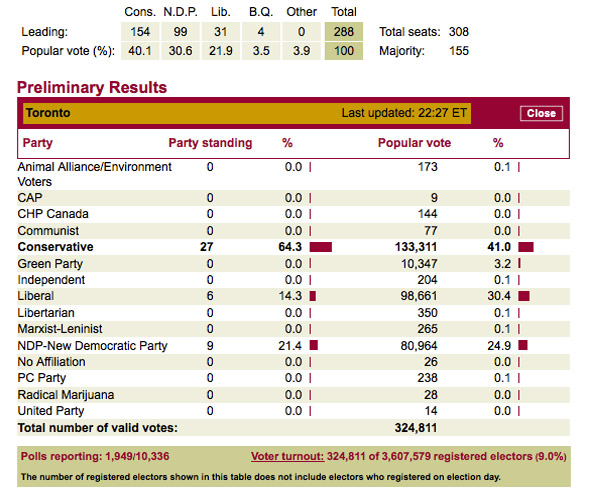 Here's a general look at Toronto results. We'll give some stats on ridings as they become more clear.

The latest federal numbers have the Conservatives in majority territory, but CBC broadcasters are quick to point out that they're lead is less than a 100 votes in about 50 ridings â hence no news agency has taken the risk to declare a majority won. At least not quite yet.

Here are some noteworthy trends from Toronto ridings:

15 minutes after the polls have closed across the country, and the Conservatives are inching toward a majority government. Also significant is that the NDP has been unofficially declared the opposition party for the first time in its history.

Here is what the breakdown looks like right now: