The Gardiner as an urban megastructure organism thing

The latest entry on the long list of strange shit that I've found on the internet is this design proposal for a "mutating megastructure" over the Gardiner Expressway (and you thought turning it into a park was ambitious). An old participant in eVolo's Skyscraper Competition — which "recognizes outstanding ideas that redefine skyscraper design through the use of new technologies, materials, programs, aesthetics, and spatial organizations" — the design is obviously more theoretical than practical, but trying to imagine something like this ever taking shape in stuffy Toronto is nevertheless still quite amusing. 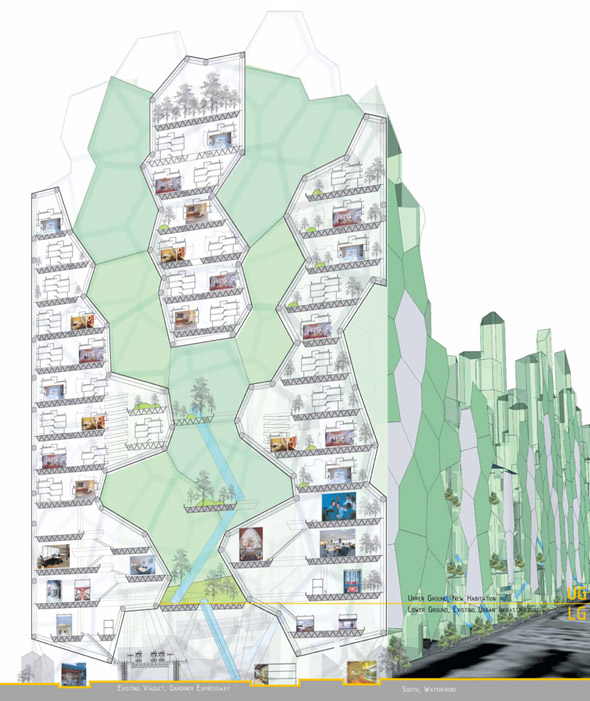 Given that the chief goal here is creativity over, say, pragmatism, there's not much point in evaluating the actual feasibility of the project. The concept is, however, not as wildly inventive as the renderings might have one believe. Basically the idea is to create the highest density structure possible. Here's how its described in the design proposal:

"Suburban sprawl is not sustainable. It neither conserves resources, nor creates sufficient infrastructure, nor protects nature...The idea for this project is the revitalization of Toronto's existing infrastructure and to make large developments above them. The main concept is to create a megastructure as an organism that mutates depending on the attached infrastructure. This is a city within the city where [in]habitants will work, live, and play in the same area." 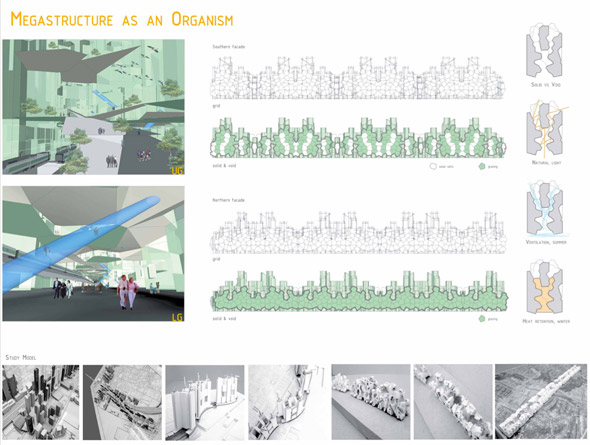 How exactly the structure is green aside from its density isn't really clear from the information online, though it's entirely possible that there's a more complex explanation out there somewhere. To be honest, I don't even really care. More than anything, I just like stumbling across odd and outlandish designs for Toronto.

Other than the original eVolo post, there's little additional information to be found about the design or its creators. So it's probably safe to assume that Waterfront Toronto — should it still exist in a few years — won't be considering the construction of a "mutation" over the Gardiner. But, hey, it'd be pretty cool if they did.

Check out more photos of the design on eVolo.