So Rob Ford and Cesar Palacio cleaned some graffiti today in front of a sizable press brigade gathered in an alley off St. Clair West . It was the mayor's only press availability all week, and many reporters in attendance bemoaned his unwillingness to take questions on anything other than graffiti. You know, things like the federal election or Toronto Community Housing.

When pressed, Ford replied "I'm here about graffiti I'm not here to talk about the federal election, I'm staying out of the federal election and I'm here to get this wall cleaned up." But here's the thing â he did a piss poor removal job! Toronto Star reporter Daniel Dale tweeted the photo below with the following description: "The wall after Ford and Palacio 'clean' it." 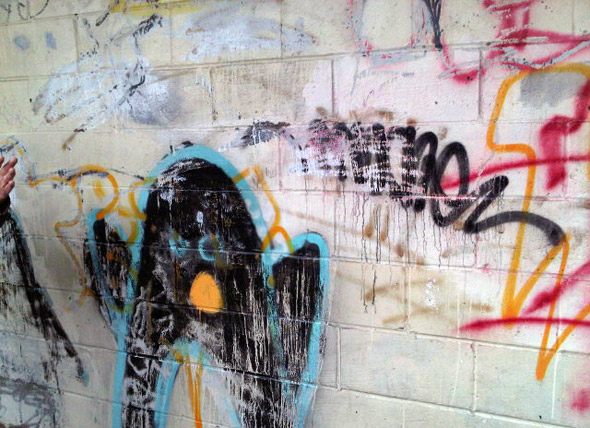 Not exactly spick and span, now is it? Ford's failure to rid the wall of graffiti is probably meaningless, but it was still the most newsworthy tidbit to be taken from event, which isn't very comforting when you consider all the important stories and events unfolding right now.