Get to know a street: Marlee Avenue

Marlee Avenue is often seen as nothing more than a (sometimes) express route from Eglinton to Lawrence. It's not the most posh looking strip in Toronto--not by a long shot, and it's capped off by two gas stations on one end, a collection of mammoth apartment buildings on the other. But among the plethora of anonymous hair salons and seemingly sad brown buildings on Marlee are a handful of local gems, giving the community its subtle vibrancy. Some have been here for decades, while others have recently landed. But they each seem to contribute to the area's perseverance of local culture, and emphasis on community.

Here are some places to check out on Marlee: 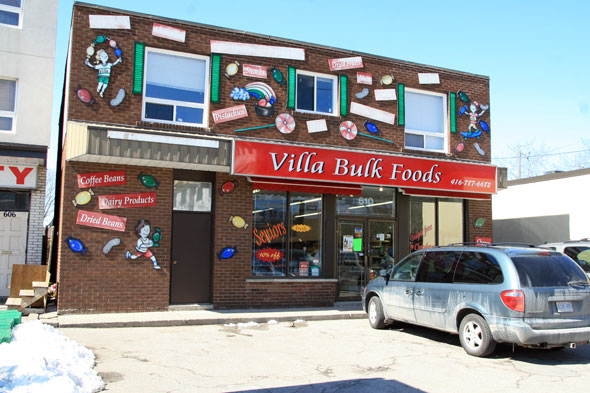 I can remember driving past Villa as a kid and secretly hoping my parents will pull into one of the two or three parking spots out front. It was those damn candy cutouts and those gleeful cartoon children scattered on the brick exterior that had me longing for a trip inside. As I revisit Villa now, some 15 to 20 years later and after a changing of hands between owners, I realize there's more to Villa than just candy. It is by no means a mega bulk store, despite a deceptively large exterior, but Villa does stock everything from organic stone ground spelt flour ($1.69/lb), to cashew butter ($6.49/lb), Italian espresso coffee beans ($7.99/lb) and even organic hemp hearts ($12.99/lb), kept in a fridge. There is also a growing selection of teas, crackers and cookies (many gluten free), olive oils, and spices. 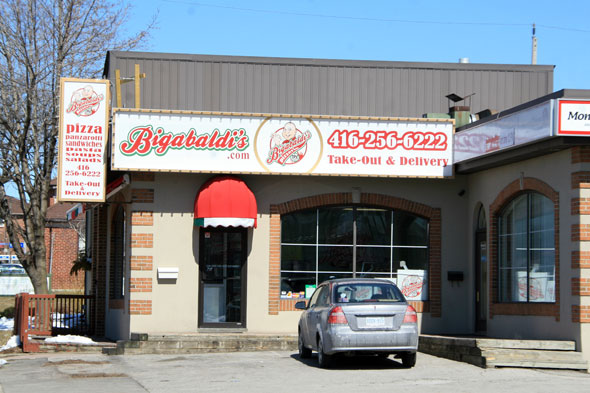 Though technically not on Marlee, Bigabaldi's is making a big impression anyhow on the street as one of its most recent new arrivals. From the parents of Coquine at Yonge and Eglinton, Bigabaldi's offers New York-style thin crust pizza, as well as a whole menu of other eats including spaghetti with breaded veal cutlet ($10.99) and cheese steak sandwich ($6.00). Another big draw, aside from its pizza, of course, is Bigabaldi's signature Dough Knots, which are deep fried knotted strips of pizza dough, which are dipped in caramel and Nutella ($1 each). They're best enjoyed on the spot on one of the pizzeria's retro red bar stools, that is, unless you find the sight of Bigabaldi's cartoon mascot slightly perplexing. A smiling Mr. Clean with a little more dough in his cheeks and lines by his eyes--beware: he's everywhere here. 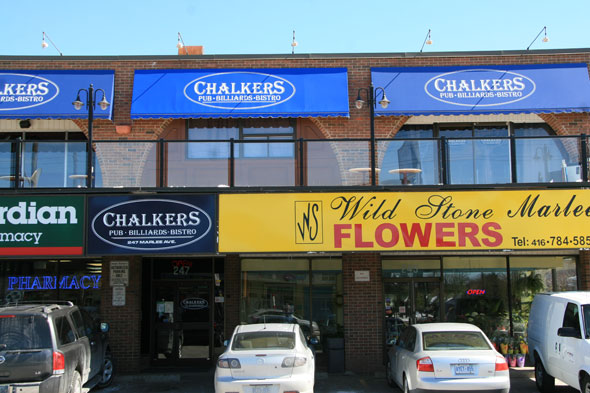 While I've been to Chalkers only once or twice during pub hours, some of my friends swear by it. Perhaps if it wasn't for the intermittent Marlee TTC bus service, I would too. Chalkers is a second floor pub and bistro with an exceptionally large patio for the area and several billiards tables. Its crowd is very much an adult one, participating in Saturday dinner jazz nights, Thursday salsa lessons, and retro DJ nights. The food is pretty good, and includes standard pub fare along with bistro-style pizzas and signature entrees including Mediterranean Stuffed Chicken and Maple Glazed Blackened Salmon. There's also an extensive martini list and eighteen beers on tap, which is making me wonder, suddenly, why I've spent so much time elbow to elbow on College...

R Bakery is another fairly new arrival, landing on Marlee about one year ago. It made a big splash with its grand opening, with Shrek, Spiderman and Cinderella all managing to stop by. Talk about knowing the right people, eh? In any case, the pictures on the wall tell me all the neighbour kids were wowed, and so too, I imagine, were their parents. R Bakery (which the girls behind the counter tell me was named to be a cool, slang take on "Our Bakery") was opened by Portuguese owners, and the custard tarts ($1.25), are simply "the bomb," according to staff. There is an array of other little treats including brownies ($1.50), mango mousse ($2.49), and black forest cake ($1.75), as well as breads, buns, and deli sandwiches prepared fresh to order. And the clientele? Well, when I arrived (besides the in-and-out) there was a group of older men, eyes glued to the flat screen wall-mounted Samsung (which, I should mention, is a fixture at nearly every Marlee business) eagerly taking in CP24. I'm sure they'd debate you on any headline, too. 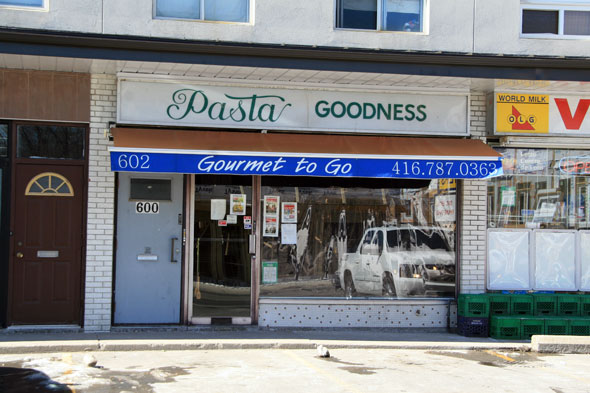 Pasta Goodness is another Marlee fixture, offering its fresh pasta and sauces to the street and surrounding area for over 20 years. Stefania behind the counter tells me everything is made from scratch, using chef Teresa Macri's much-loved recipes. A beacon of prepared foods, the popular dishes include beet and carrot salad ($2.20/100g), penne al forno ($2.50/100g), and jumbo cheese tortellini al pesto ($2.80/100g). For the cottagers on their way out of the city, though, it's all about the frozen lasagna ($34.95), which doesn't necessarily have to come in a tin pan. Stefani tells me that Pasta Goodness will cook its lasagnas and other meals in your own dishware, "So it looks like you were the one doing the cooking." Ah, those sneaky devils. No wonder everyone in the neighbourhood seems to do Italian so well! Pasta Goodness also has a decent selection of giftware and plates, hand-picked and imported from Italy.

Do you have any suggestions for overlooked streets you think we should feature on this site? Please send suggestions to streets [at] blogto [dotcom].