What kind of place is Bloot Street?

We don't necessarily have the best track record when it comes to typos here at blogTO, but that's not going to stop me from having a little fun at the expense of Rob Ford and his error-marred business card. First brought to our attention yesterday afternoon by Daniel Davidzon on Twitter, it seems that up until then no one had noticed that the Ward Map on the back of the mayor's card substitutes Bloot St. for Bloor St.

Not a big deal, I suppose. But inevitably some are wondering if the error doesn't symbolize the lack of attention Ford pays to the downtown core â the typo being in the heart of Ward 20 and all. I don't want to go this route. It's not as if the Mayor proofs these things himself, after all.

Instead I wonder if we might do the "symbolizing." Since Rob Ford has brought us Bloot Street, let's speculate as to the meaning of its name and what it's like to live there. The Urban Dictionary gives a bit of guidance with regard to the former, but the most popular definitions can't be printed here (seriously, if you're easily offended, don't follow the link), so it's up to us to write the back-story of the street. What type of people live there? Who or what was it named after?

I don't have prizes, but some creative ideas might just win the hearts of fellow readers... 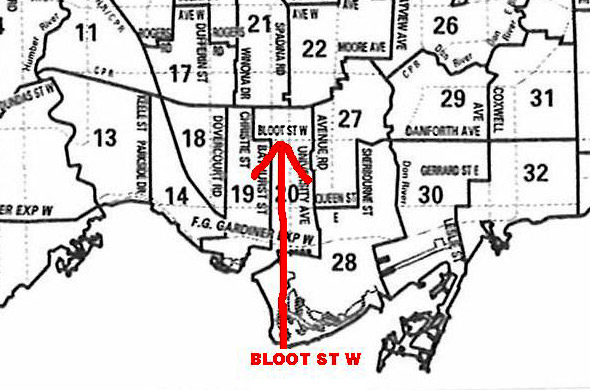