The history of when Toronto got its first subway

It's hard to imagine the enthusiasm that marked March 30, 1954 in the history of Toronto, when the 7.4 kilometer subway line opened between Eglinton and Union Stations.

According to Mike Filey's The TTC Story: the First Seventy-Five Years, the first mention of a subway (which then was then referred to as an underground railway) appeared in The Evening Telegram on April 29, 1909. 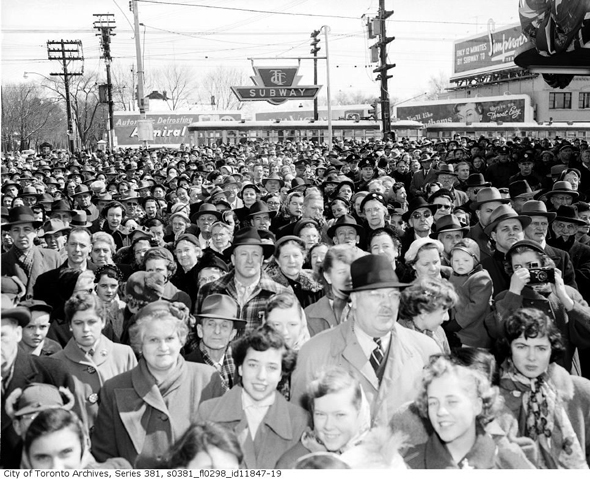 The article describes a meeting between City Engineer Rust and the representatives Kearney High-Speed Railway Company from London, England.

The entrepreneurs presented an offer to construct and operate two underground lines, which entail the cost of one million dollars per mile. 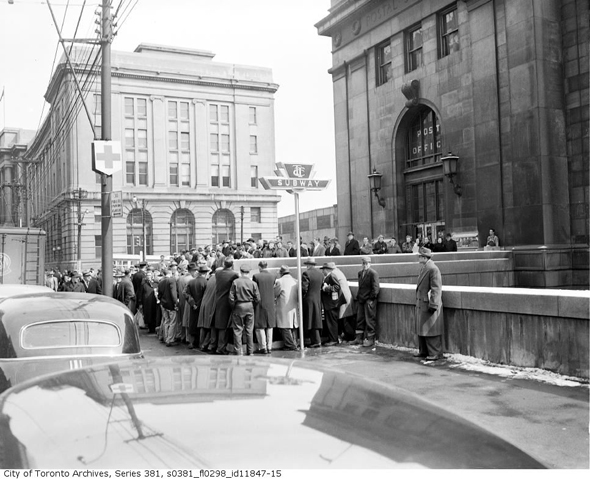 The first route was planned to run under Yonge Street (just like the line that was actually built) âfrom the Town of North Toronto (Eglinton Avenue) to the Customs House at the corner of Yonge and Front Streets (close to where Union Station is now located).

The second line was outlined as originating in the east end and, via Queen, Dufferin, and Dundas Streets, would end in the the west end.

This proposal came to nothing, since Rust informed the reps that the city was planning to take over public transportation in 1921, when the mandate of the Toronto Railway Company was set to expire. 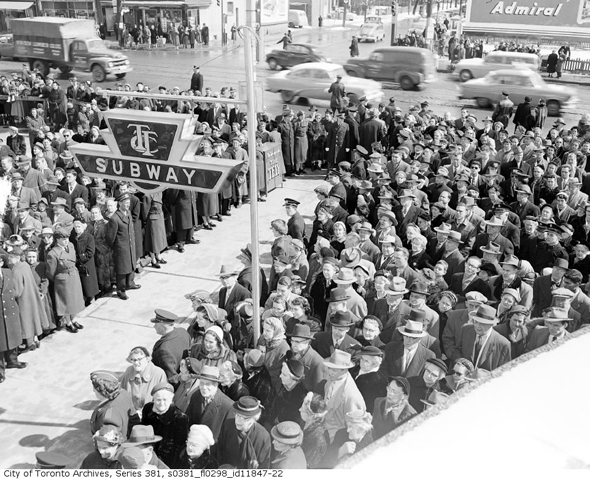 Crowds gathering to witness the opening of the subway.

Two early proponents of the subway were Horatio C. Hocken and James Grand. During his campaign for the office of mayor in 1910, Hocken's platform stressed the necessity of a subway system, but the voters believed that the city did not need it.

Ironically, a plebiscite two years later revealed that most Torontonians were in favour of building underground railways. Grand, a businessman, believed that rapid transit was an "absolute necessity" due to steadily growing population. 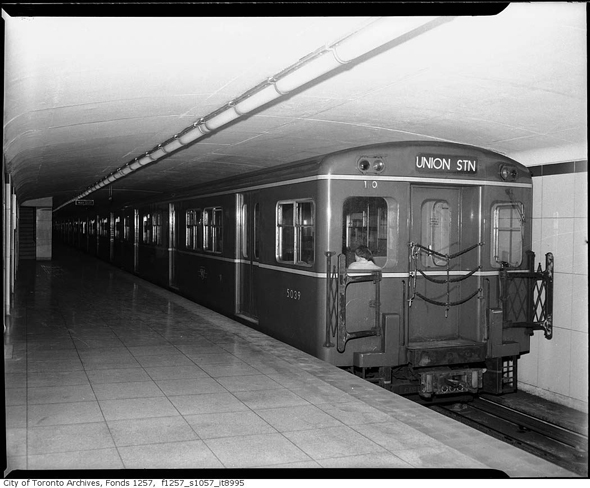 Another hindrance was the cancellation of a plan prepared by a city engineer in 1911, which outlined a subway line, running from Bay and Front Streets to Yonge Street and St. Clair Avenue. The divided electorate killed the scheme, estimated at over five million dollars. 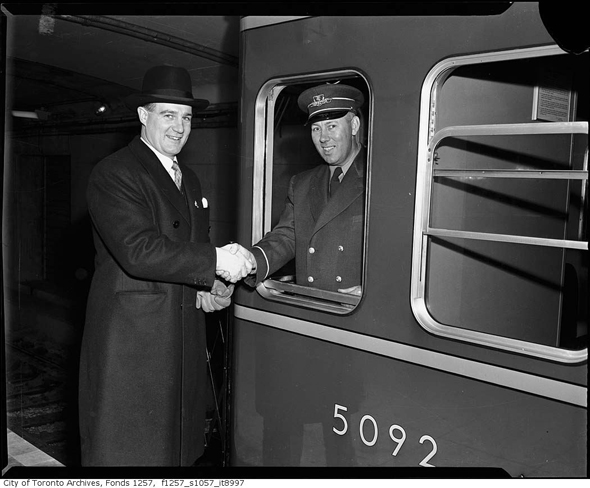 It wouldn't be until the 1940s when the topic of rapid transit resurfaced again in the face of rapidly increasing traffic in the core of the city.

In 1942, the TTC issued a proposal, featuring a north-south line that would run under Bay Street from Union Station to north of Bloor, and then turn northeast and continue under Yonge Street, culminating north of St. Clair.

However, this plan seemed too complicated and was revised in a way that the subway would be constructed to run in a straight line under Yonge and Queen Streets. 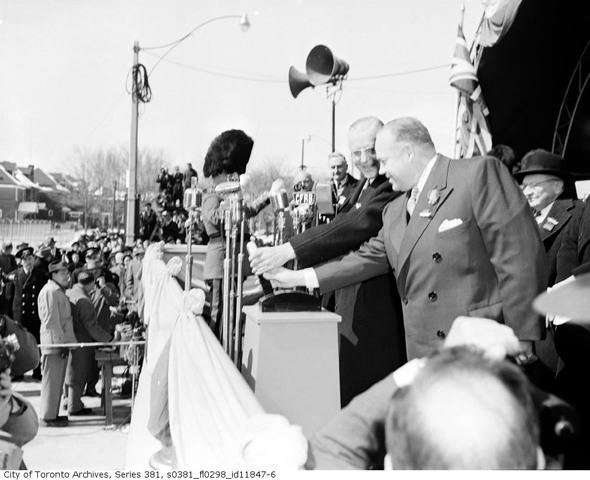 On January 1, 1944, the Toronto Transit Commission established the Rapid Transit Department, with the plan to build the first subway system in the country.

However, as World War II was still raging in Europe, delaying the construction that was finally began in 1949.

Another plebiscite took place during the municipal election on January 1, 1946, and this time around Torontonians were overwhelmingly convinced that their city needed a subway system. 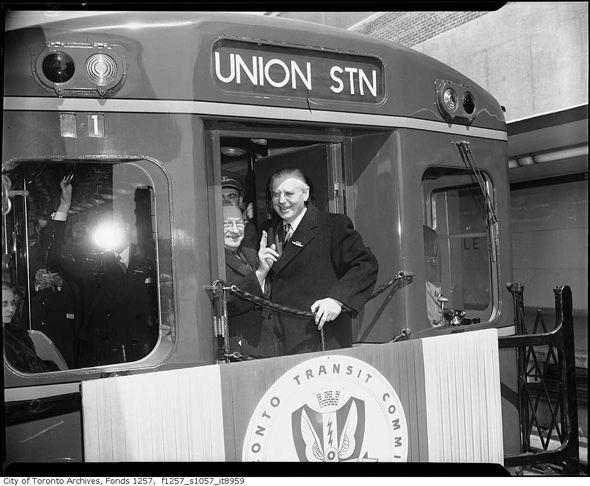 On March 30, 1954, the subway, running under Yonge, from Union Station in the south to Eglinton Station in the north, was officially opened by Leslie Frost, Premier of Ontario, and Allan Lamport, Mayor of Toronto.

Those who came to witness the event were assorted politicians and bureaucrats, TTC employees, and of course, a sizable crowd of Torontonians.

Among those present were print, radio, and motion picture news media, as the first local TV station did not open until August of that year. 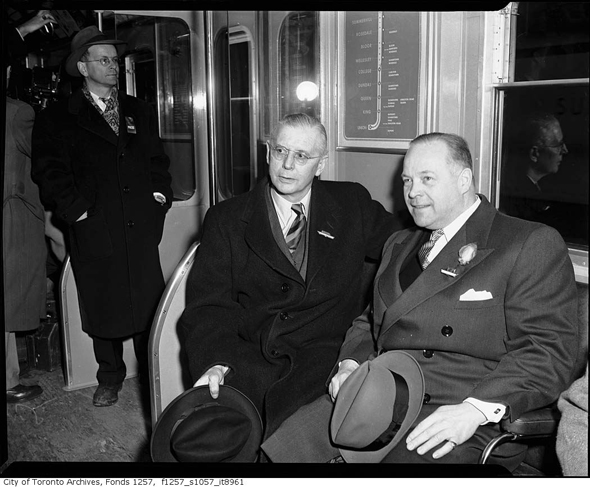 The operation of the subway formally commenced when Frost and Lamport together pushed a lever forward, which resulted in a block signal changing from amber to green.

Then, more than a six hundred invited guests boarded a northbound train, which departed at 11:50 a.m. The general public wasn't able to board until 1:30 p.m., and the passengers had to pay the fare, which was ten cents.

It was less expensive to use a ticket than pay cash, and the tokens came in at three for a quarter. It's interesting to note that, at the time, the Town of North Toronto, which was annexed by the city in 1912, still retained much of its rural character. 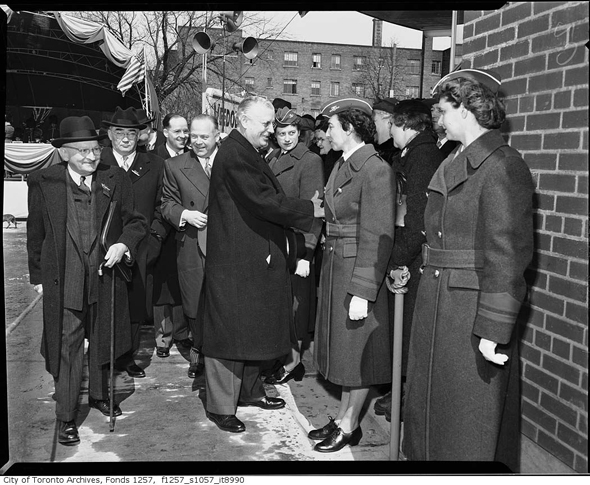 The opening of the subway was the first major milestone for the TTC, whose operations were considerably expanded after the creation of Metropolitan Toronto in 1953.

John Sewell, a former mayor and an author of several books on urban planning in Toronto, saw it as the first step in the transformation of the TTC from a successful agency that provided effective local transportation, to an underfunded and poorly planned system, charged with the enormous task of providing regional transportation to a scattered population residing over a 240-square mile Metro area. 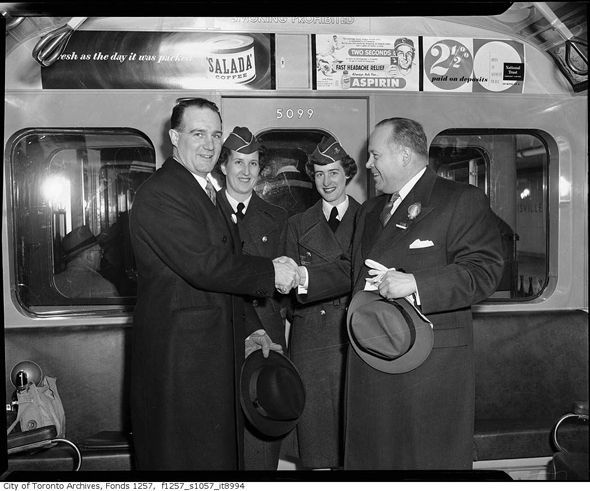