The first poll to determine Rob Ford's approval rating has been released, and it looks pretty good for the Toronto mayor. Based on a phone survey of just over 1000 people by Forum Research Inc., roughly 60 per cent of Torontonians approve of the job he's doing so far. The Globe's Kelly Grant notes that "six months into his first term, former Mayor David Miller enjoyed an 82 per cent approval rating," but I can't remember what the political climate was like back then, so let's just focus on these most recent numbers.

If the 60 per cent approval rating comes as a surprise â and, to be fair, it might not to everyone â there were some predictable findings. Urban and suburban residents remain divided in their feelings about the mayor, with his highest approval rating coming from Scarborough (71%), which was followed by North York (65%), and Toronto/East York (46%). According to a press release, "Ford's approval as Mayor was also higher among older residents (49% 18-34, 63% 35-54, and 67% 55+)."

Along with the lead, the poll also asked a few questions related to Ford policies and other city issues. This is where it gets problematic. A number of the questions are worded imprecisely, particularly those that relate to transit and cyclists. Take for instance, the usual subway lines vs. LRT question. The poll asks the following: "In order to improve public transit, do you think more below ground subways or more above ground light rail streetcars should be built?" It might not seem like a huge deal, but LRT lines aren't for streetcars (and it's quite misleading to suggest such an inefficient use of the proposed lines) â so pretty much nothing can be gleaned from that question. 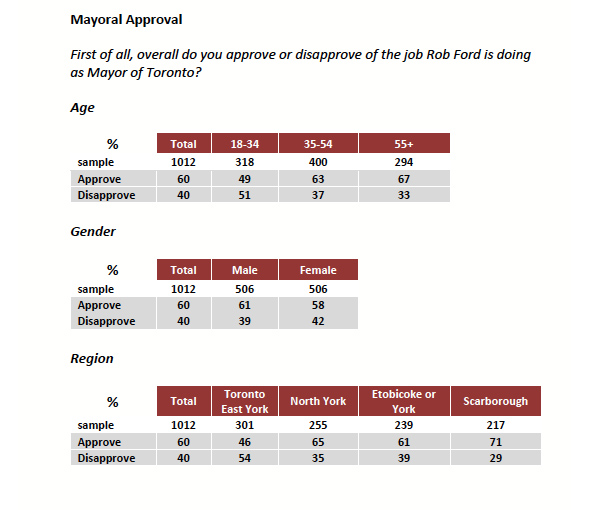 Similarly, the poll asked if respondents approved or disapproved of "licensing bicyclists so that traffic laws can be enforced with them?" A cyclist doesn't need to be licensed to be held to the Highway Traffic Act, which is a provincial document anyway. Another question asks whether people approve of the idea of City of Toronto employees having "jobs for life." Has anyone ever proposed this?

These questions are either transparent attempts to skew the numbers or demonstrative of polling incompetence, which is actually a bit of shame if you're a Ford supporter. Nothing looks out of place with the first part part of the poll, but given the wording of some of the other questions, I wouldn't blame someone for writing off the whole damn thing.

You can check out the poll in its entirety here.

Lead photo by Scott Snider in the blogTO Flickr pool.