A last look at the Imperial Oil Building (pre-condos)

Workmen have already begun gutting the office floors of the old Imperial Oil headquarters on St. Clair West, which seemed like a good time to get a last glimpse of the interior of this monumental midcentury modern office tower before it's transformed into one part of a condo complex sprouting by the corner of Avenue Road.

When we reported on the building last summer, a new owner had taken over the office tower, which had sat empty since Imperial Oil vacated it in the middle of the last decade. Camrost Felcorp, the new owner, has pressed ahead with plans, which will see townhomes and a new tower sprout in the south parking lot, while the Whitecastle New Urban Fund and Steve Diamond's Diamondcorp will be building a 32-storey condo tower immediately to the west, incorporating the shell of Deer Park United Church, Imperial Oil's neighbour for half a century. 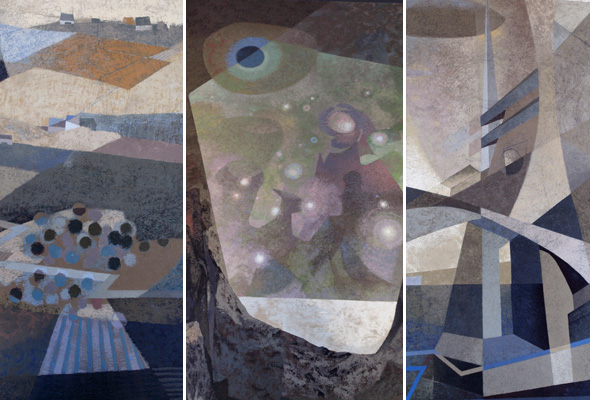 According to the plans, the lobby is supposed to remain largely unchanged, and the preservation of York Wilson's pair of pre-psychedelic murals is being sold as a feature. Wilson's work is a lingering testament to the aggressively weird creative ferment that simmered under the gray flannel post-war decade, and they deserve pride of place. The artist's original intention was to depict "the Story of Oil," but the abstraction he employed in this narrative plays out, to modern eyes, as simply "past and future," or "rural and city," especially if your eye rests on the pastoral farm fields in one canvas, then the thrusting, Jetsons-like cityscapes in the other, which fill Wilson's work here with that eager but anxious postwar love of modernity. 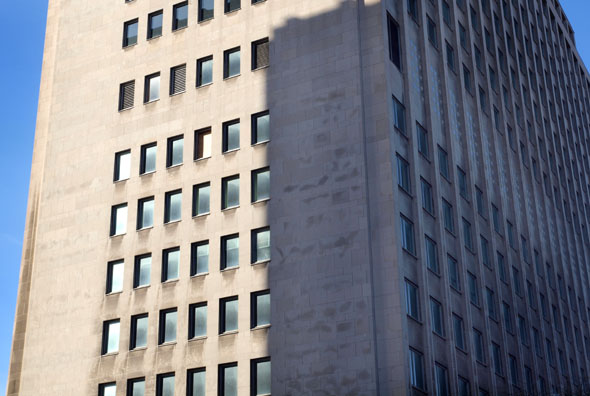 A trip to the executive suites near the roof reveals a sad sight. After you walk arrive in a striking foyer, with its domed ceiling and gold mosaic tiles glinting in the cool morning sun, you walk into the once-grand boardroom, which is being stripped of its wood paneling, and has suffered water damage from a flood late last year. Even in its diminished state, it's hard to overlook the power and authority once held by a company like Imperial Oil, which prospered in an era when Canada was a world player because of its resources - the wood, metal and fuel that it supplied to the world, behind corporate brands such as Abitibi, Alcan and Noranda. 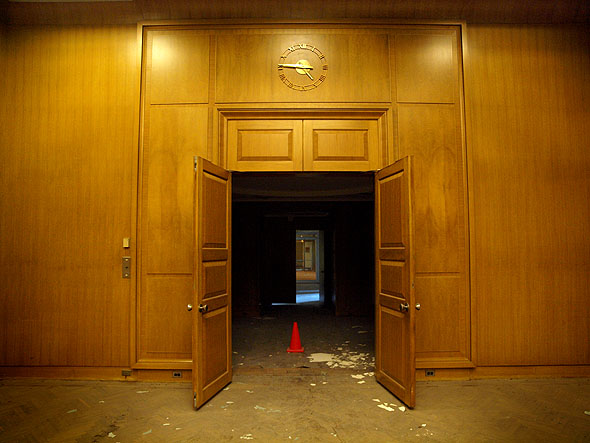 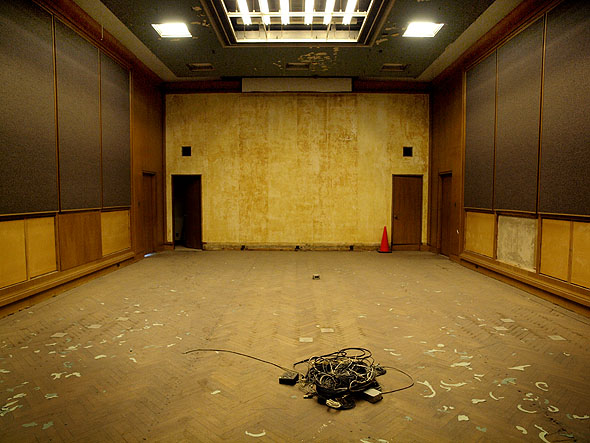 We didn't make much, but you couldn't make much without the stuff we produced, so when Imperial Oil decided to build a new headquarters, they opted to use a design rejected by a competition for a new city hall; if you're fan of alternate history, try imagining the St. Clair office tower at the top of Nathan Phillips Square, in place of Viljo Revell's saucer and parentheses. It's a solid building, favouring stone facing and smaller windows over the glass curtain walls beloved of European modernism, and thanks to its sturdiness and somewhat isolated location, was chosen as the potential site for an emergency hospital if the Cold War ever heated up and downtown Toronto ended up in the nuclear crosshairs. 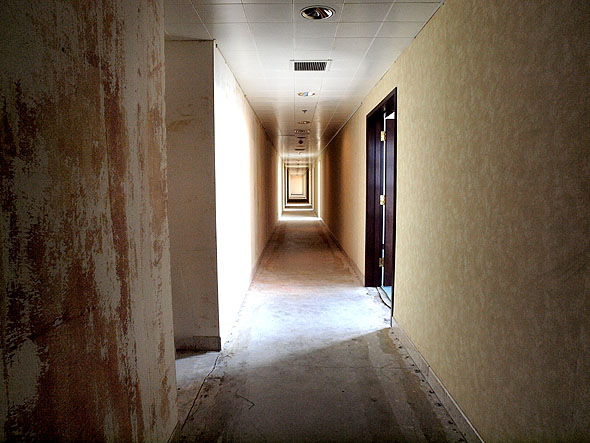 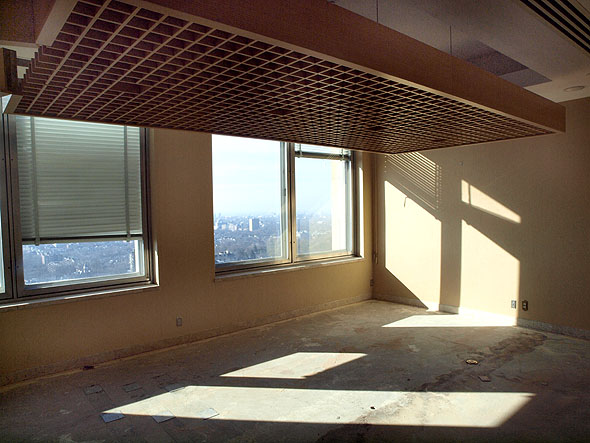 With its generous, airy offices, massive corner suites and long hallways, the executive floor is still redolent of Mad Men-era corporate life, as lived near the top level. In one smaller meeting room, a sturdy wood trellis hanging from the ceiling was meant to disguise what was once a cutting edge piece of office technology - a massive video projector for presentations, a major item on one year's budget, now hopelessly obsolete and probably landfill. 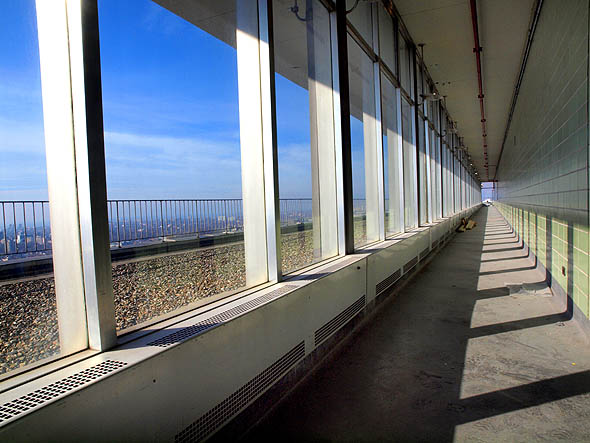 Up above is the observation deck, three floors that mostly housed machinery for the tower, and which will be penthouses with what might be the city's best views. It's fascinating to learn that vast sections of the basement, at least a floor in the middle of building, and the major part of the roofline were once dedicated to the heating, air conditioning and other systems that kept Imperial Oil's headquarters running, and that they can be mostly dispensed with by our leaner, more compact technology. 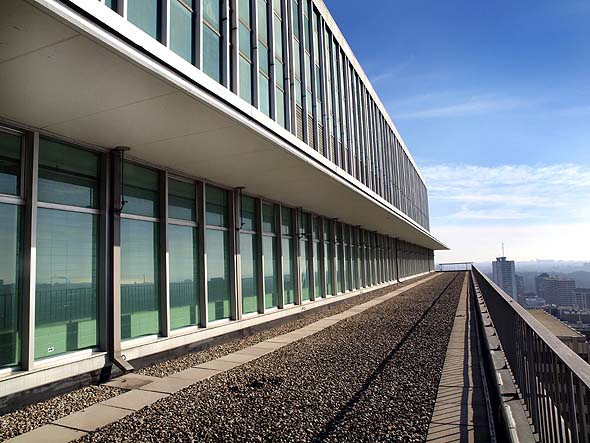 It's also a shock to see how unglamorous the observation deck was - an apron of stones and concrete pavers running up to a low railing, with little sense that the building's corporate owners ever took much advantage of the stunning views for entertaining. Looking down on the south side, you can see where townhomes will be built - almost exactly on the site of the house that Isabel Massie owned, and which sat in the shadow of the tower for years when the old woman refused to sell. The return of homes to the Imperial Oil tower site feels like a posthumous victory for Mrs. Massie. 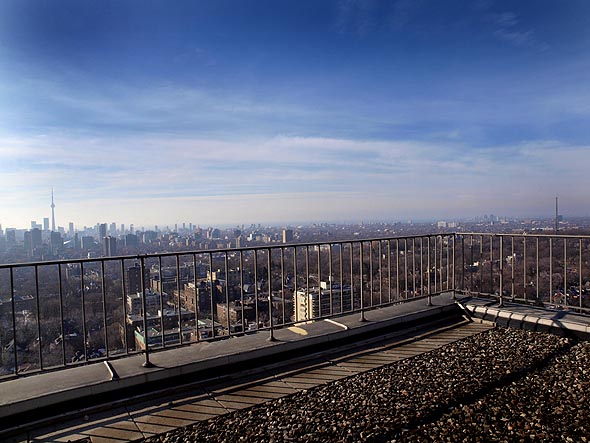 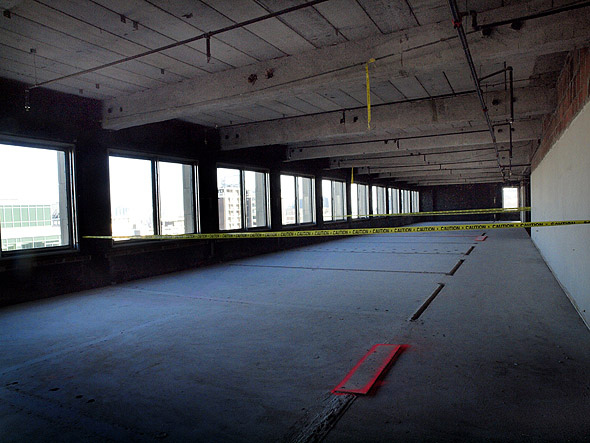 Further down the tower, floors are already gutted, revealing the wild overengineering of the building's bones. Glimpsed along the way are little details - the brass wall-mounted clocks by every elevator lobby and foyer, the remnants of the mail system (the intranet of its day,) and sleek light fixtures that will likely find a new home in some upscale restaurant somewhere. They look like the last vestiges of a time that could still mint its style anew, without the borrowing and outright stealing that we rely on so desperately today. 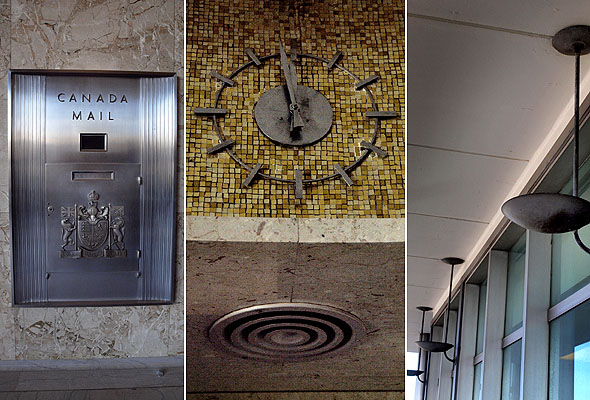