The troubled state of Toronto heritage

A report released yesterday on the state of heritage in Toronto (PDF) doesn't paint the rosiest of pictures when it comes to the preservation of our historic buildings. Complied by Heritage Toronto, the chief finding of the study is that "more funding needs to be allocated towards research and education in order for Heritage Preservation Services to focus on prevention rather than reaction." That such a report would come to this conclusion isn't that surprising, but the distinction that's made between preservation and reaction is a crucial one, as recent events at Yonge and Gould have illustrated.

Of the many challenges that preservation efforts face in Toronto, perhaps the biggest is also what one might think should be the most straightforward. Due to limited staff at Heritage Preservation Services, Toronto's inventory of heritage buildings is anything but comprehensive. In fact, participants in the consultations that form the basis of the report note that "buildings are often listed/designated as a result of an application for demolition being submitted." Needless to say, that's not the best way to go about protecting our architectural legacy. Although the heritage inventory is now available online, searching out buildings worthy of being "listed" (i.e. recommended for inclusion on the Inventory) should not prove so difficult. 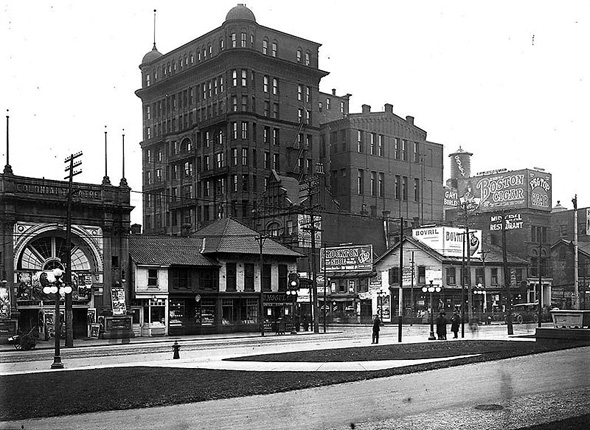 Other key issues cited in the report include ambiguous and sometimes contradictory language in the City's Official Plan, the lack of value attributed to heritage on a political level, lack of public education and awareness regarding heritage and conservation, the degree to which downtown is privileged over the rest of the city when it comes to preservation and our lack of a dedicated City of Toronto Museum.

Addressing the last issue on this list -- as unlikely as it is to happen any time soon -- would, I suspect, go a long way towards helping out in the other areas as well. While Toronto does have a network of 11 museums -- including Campbell House, Spadina House, Todmorden Mills, and Colborne Lodge -- it's appalling that we're one of the few major cities in North America that lacks a museum tasked with telling our collective story. According to the report, "If Toronto wants to be a 'world-class city' it needs a City museum. Having a museum for the whole city, supported by the satellite museums, would create a strong sense of civic identity and pride."

If this sense of historical awareness and pride could be heightened and fostered, perhaps greater pressure would eventually fall upon politicians to beef up the resources allocated to heritage preservation. Perhaps that sounds naive, but if heritage has yet to capture the public's imagination, how can one expect that politicians will make it a priority. Reports like this one tend to preach to the choir, a small group of well-informed urban activists who already see preservation of the city's heritage as a crucial issue. The key is to inspire a wider segment of the population. Can a museum accomplish this? Not on its own. But it'd be a good start.