The strange world of Toronto's Cash for Gold stores

Toronto's Cash for Gold stores -- most of us just ignore them. Sure, Oliver pops up every now and again, hijacking our television screens as he fans himself with money and poorly emulates the Kool-Aid Man's signature "Oh yeaaahh!" And then there's Harold the Jewellery Buyer, who promises "courteous, professional service," but whose business was embroiled in controversy when it was discovered that one of his employees had contracted a hit man to murder Jack Berkovits, owner of the competitor Easy Cash for Gold, which is located just a few doors away from Harold's shop.

Despite the drama, however, for the majority of us these businesses carry on unobtrusively. But what about those who are down on their luck and forced to sell some jewelry to make a quick buck? Or the sudden recipient of some inherited gold? Or, of course, the possessors of once-meaningful jewelry, now junk jewels after a bad break-up? Can the "Cash Man" really do something great for them? I visited three cash for gold stores in Toronto to find out.

My first stop was Harold the Jewelry Buyer, who has settled in his new location further north on Bathurst (close to Lawrence) after a suspicious fire broke out at his old store. I toted along a 10k white gold ring that I got as a birthday present several years ago. As one of the few pieces of jewelry I own worth more than the $0.25 I typically put in the dispenser to receive them, I had no intention of actually selling it. But I prepared my poker face anyway and went on my way.

As I approached Harold's bar-clad front door, I passed what would be the saddest sight of the day: some poor guy wearing a sandwich board plastered with Harold's face and directions to the store. I immediately felt ashamed for once labeling my job as a camp counselor where I had to clean up three-year-olds' vomit as "The Worst Job Ever." I approached the door and pushed furiously. Being a total newb, I hadn't realized I needed to wait to be buzzed in. And that poker face immediately melted into a sheepish, red-faced smile. Two buzzers later, I was inside.

To my surprise, the waiting area was rather crowded. There were about seven people in the white-walled room, which was decorated with lots of iron bars and a pair of two-way mirrors. It had a real "homey" feel, in other words. I approached the woman behind the gate and told her I wanted to sell my ring.

"How much do you want for it?" she asked.

"You're not sure?" she said, raising an eyebrow. Had I just shown her my cards? "OK, take a seat." And, for some reason, she slipped my ring onto her pinky finger. 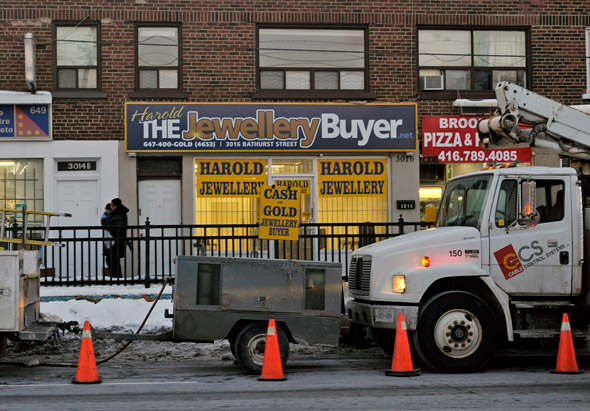 I plopped myself in a chair and stared at my shoes. The room was eerily silent, save for the buzzer ringing every two minutes, making me jump and testing my bladder each time. Sandwiched between two burly men, and overhearing the impassioned bargaining going on behind the mirror, I began praying that I may never develop a gambling problem.

Then it was my turn, and Harold appeared to let me through the gate. As we passed the woman informed him that, "She doesn't know what she wants for it."

"She doesn't know what she wants?" he replied with a little too much dramatic mirth. Obviously, this news was somewhere in the realm of "There's this video of me online..." because it was just too good not be shared. We entered Harold's lair and he sat down behind the desk. A quick look, a weigh, and then:

I tried to catch my reflection on the back of Harold's computer to see if the word "moron" was actually inscribed across my forehead. Purchased close to 10 years ago, the ring was probably about $200 or $250 retail then. And even I know the price of gold has gone up since then.

"No," I said, trying to maintain my composure. "I don't think I can sell it for that."

And with that, he reached inside his jacket, pulled out an enormous wad of bills, and lifted a fifty off the top.

"Here," he said, tossing it nonchalantly on the desk. "Take it."

"What? It's money!" he replied. "You don't want $50? It's a lot of money!" Of course, my next thought was that I probably should have combed my hair before coming.

As I exited through the gate, Harold told me to think about it, perhaps realizing he didn't have a complete sucker on his hands. "I can give you between $80 and $110." I couldn't get out of there fast enough. 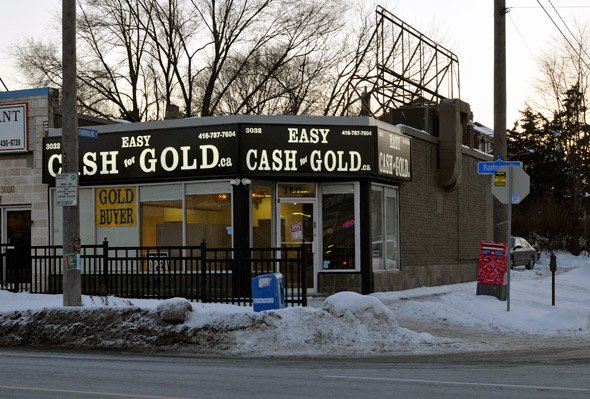 Next, I headed a few doors north to Easy Cash for Gold. Still trying to make sense of what had just happened, I stood outside the door like an idiot waiting to be buzzed in. Of course, at this store, you could just go right in.

I entered the empty shop and approached a glass booth while a middle-aged man appeared on the other side. He took my ring, and, to my relief, didn't put it on his pinky finger. After inspecting and weighing it, he put it down on the counter.

Needless to say, this experience was a little more enjoyable. 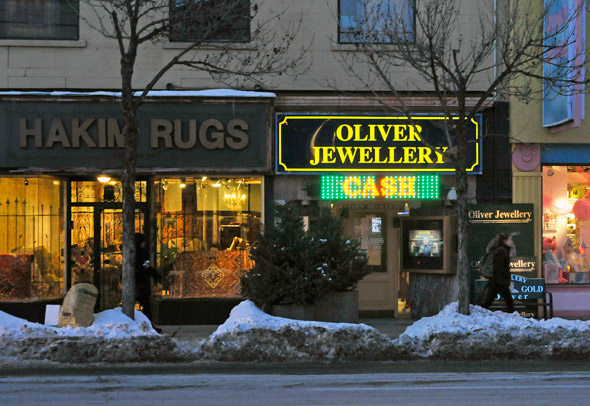 My last stop was Oliver Jewellery at Eglinton and Avenue Road. Having seen the famed "Loan Arranger" on TV for years, I was curiously excited to finally be face to face. The first door was unlocked, so I let myself in. Little did I know, I was entering a bona fide house of horrors as I found myself stuck between a pair of doors as two different "Cash Man" commercials played over each other, blasting through the speakers. If hell has cheap cowboy hats and wads of cash, this would be it.

Luckily, I soon heard a faint voice call to me from the distance. "Are you selling gold?" it said, somehow audible through the terrible cash man jingle. Was it the great and powerful Oz? I didn't care; I needed to get out of there. "Yes," I replied, and my freedom was granted.

To my dismay, Oliver wasn't there, so a man who looked just a few years older than me approached the counter. Same deal; he looked at the ring, weighed it, and tossed out, "Eh, I could give you $50 to $80."

"Can you be more precise? I asked. My confidence was building.

I told him I'd think about it.

I left with the prospect of getting $130.

My experience left me fairly dismayed, a little shaken, but feeling a lot more confident about understanding the cash for gold world. If I ever were to sell my gold for real, I'd go in with a plan, perhaps some ear plugs, and an unwavering attitude with regards to what I want to get. But do I think I could ultimately make it worth my while? Oh yeaaahh!