Behind the big mess on St. Clair West

There's nothing out of place about construction in Forest Hill, a neighbourhood that seems to be replacing itself house by house, upgrading every merely spacious mansion into a boundary-line-hugging monster home with furious intent. The fenced-off building site at the corner of St. Clair West and Parkwood Avenue just by Spadina Road is an exception, though, inasmuch as it's been sitting unfinished for at least two years now, as if workers downed their tools and drove away one afternoon, never to return.

Which is basically what happened, to the distress of locals. Robert Boltman knows; his office is just in front of the derelict site, where steel I-beams jut into the sky like dead trees and dirty plastic tarps, shredded by the seasons, flap sharply in the winter air. Boltman and his business partner Alex Bartlett work in a converted storage container perched on the uneven dirt between the sidewalk and the building's half-demolished frame, in what looks at first glance to be a site office, which would explain the sign.

"WE'RE NOT THRILLED ABOUT IT EITHER," reads the vinyl banner mounted on what was once the frame for a sales sign, just to the west of Robert's office. "It's kind of like having a neighbour who's never cleaned up their front yard, painted or renovated ... we have absolutely nothing to do with this STALLED CONSTRUCTION PROJECT." 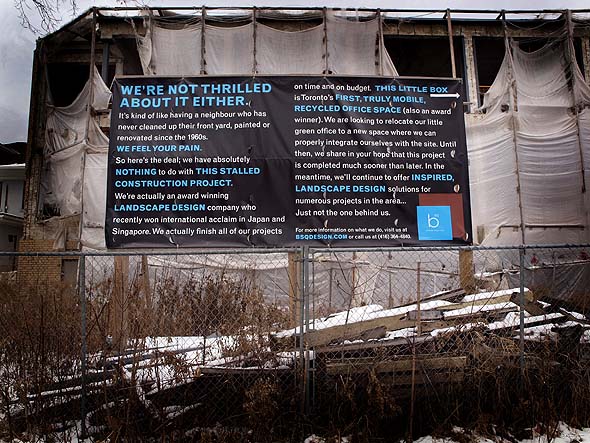 The sign is an ad, of sorts, for Boltman and Bartlett's landscape design business, B Sq., as is their presence on the bare earth of this eyesore, in the converted shipping container that they turned into their office for another promotional opportunity. It's a simple case of opportunity knocking, and ultimately forcing them to do a lot of explaining.

Boltman and Bartlett built their portable office for the 2009 Interior Design Show, where they were invited to submit a project to fill a ten-by-twenty-foot plot - too small for all but the most basic garden design, but a priceless opportunity to get some attention. They had regretted all the waste they'd created creating displays for gardening shows, and wanted to do something different. 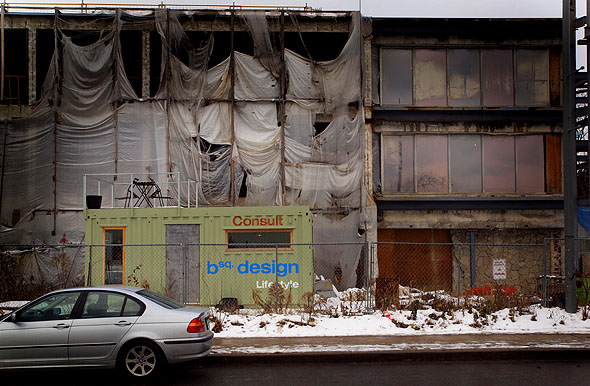 "The concept was that we wanted no waste, that we wanted a space for Alex and I to work, and we wanted to be environmentally sensitive. So we ended up with a container office, and we plopped it down at the 2009 Interior Design Show and we won a design award, and we were beside ourselves. It was the most popular thing there - it was really neat for people to see. We ended up picking it up, and dropping at the Green Living Show, then Canada Blooms, then the National Home Show. So we ended up in four or five places that year ... it was kind of this little box that keeps on giving."

In the spring of 2009, they had an office but nowhere to put it, until they heard about the derelict site on St. Clair. "Currently we're sitting on a brownfield site - that's the way we see it. We don't know what's happening with the building. It was a condo and we believe the land was bought by an American company to run some sort of chain of retirement homes, and when the bubble burst there in the US so did this project. We know one of the guys who were managing the site, and he said 'we've got this piece of property here on St. Clair - you can leave your box there.' The deal was that we'd pay a small amount of money for rent, and that's how it's been. We don't spend more than $240 a month."

Irritated neighbours reasonably assumed that they had something to do with the increasingly dilapidated building site behind them, which led to the sign, which they put up last November. "Alex wanted to take the signs off the box and the truck and take ourselves away from here, and I said when are we going to get another opportunity to be on St. Clair again? We do want to leave, but we don't know where to leave to, not at the moment, so let's inform people."

"People look at the negative and we said look at the positive - here's a site that unfortunately isn't being developed, and that could be anywhere in Toronto. It just happens to be Forest Hill. It's a site that isn't being developed and we can use that with a very low environmental footprint. We can move in, we can move out. We saw it as a real opportunity. It's walking distance to a few of our clients' homes, we don't operate with much power, and we can store things on the site." 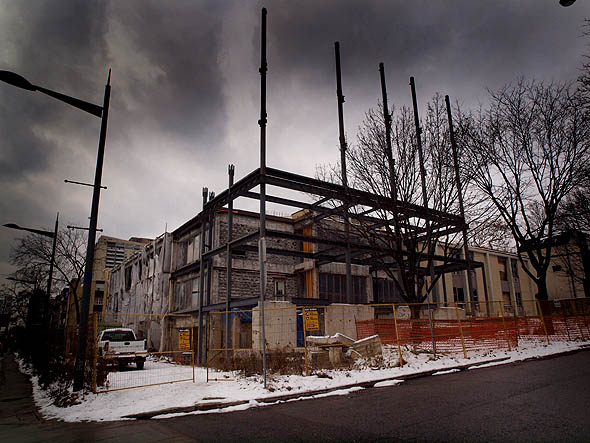 A quick Google search of the address turns up a name - Village Park Retirement Residence - and a disconnected phone number. The owners had managed to get the project listed on a number of retirement home websites and apply for a parking lay-by from the city before it went under, though Boltman says that there have been a number of recent site visits checking on the structural integrity of the building carcass. With its prime location and commanding view of Winston Churchill Park, it's a mystery why it's been in limbo for so long, but the city's real estate market frequently produces these curious anomalies.

"An interesting possibility is that a company does buy that site and we end up working for them, Boltman speculates, wishfully. "We just want people to look at it as us doing the right thing, not the wrong thing."