The top 10 Toronto athletes on Twitter are worthy of a follow if only because such an act might help fans to forget the recent crushing Team Canada defeat by the Russians in the World Junior Hockey Championship. In the wake of such disappointment, it's hard not to look local instead of national for sports encouragement.

Yet, the world of social media can be a touchy subject for sports teams. The teams themselves are certainly active on sites like Facebook, and have big followings on Twitter. The Leafs, @mapleleafs, have over 30,000 followers and do a great job of constantly updating, and actually talking to fans. The Raptors, @Raptors, have over 23,000 and share photos and live-Tweet games. The Jays, though in the off-season, are still active on their @BlueJays Twitter account to keep their over 15,000 followers happy. And the Toronto FC (@TorontoFC, over 6,000 followers) and the Argos (@TorontoArgos, almost 4,000 followers) have small but loyal followings.

But what about when the players get involved? Teams across all pro sports leagues are increasingly getting their players tweeting, updating their Facebook pages, and blogging in order to engage fans and give a glimpse into a pro athlete's life. It's not always a good idea to give athletes a soapbox online, as you'll read, but they're Tweeting away nonetheless. Here are the top 10 Toronto athletes on Twitter, ranked by their followers - and no, Chris Bosh isn't on the list anymore. 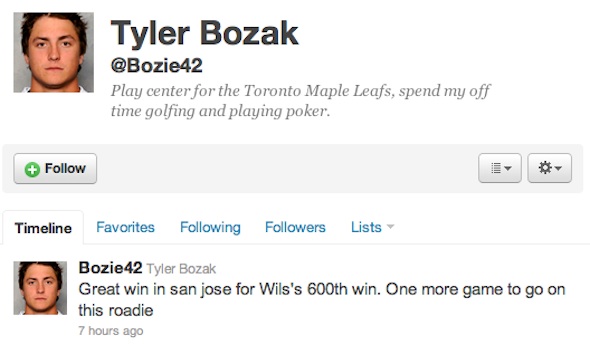 @mkomisarek
Mike Komisarek
Followers: 15,067
Twitter style: If "not Tweeting for months" is a Twitter style, then Komisarek is acing it. He only has 168 Tweets, many of them from the off season. He did share some interesting updates about training camp, but I'm sure fans want to see some insight now that the season is in full swing.

@armdog
Colby Armstrong
Followers: 14,249
Twitter style: Armstrong is definitely more active than Komisarek, but here's his Twitter style: talk to other Leafs players and send out text-only Tweets. His stream is sprinkled with @ replies and links, but it's mostly just updates about Dexter, RealSports bar and his media appearances.

@bozie42
Tyler Bozak
Followers: 11,328
Twitter style: Bozak only has 136 Tweets, but he actually replies to fans, ReTweets them, and thanks them for their support on Twitter.

The Leafs have had a problem with fake accounts (trust me, @TheRealVersteeg isn't the real Versteeg). They posted this video recently to go over the only players who are actually on Twitter, so be wary of any impostors. You can read the players' insights about Twitter in this recent Toronto Star article. 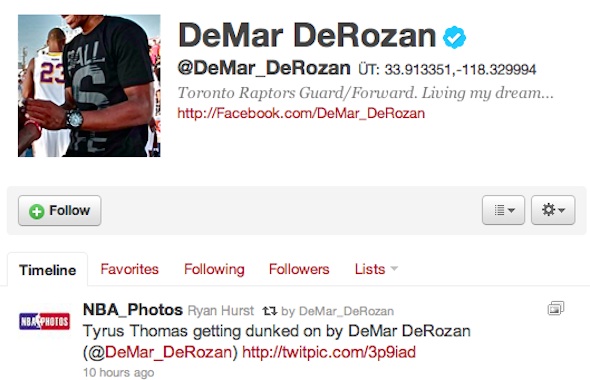 @DeMar_DoRozan
DeMar DeRozan
Followers: 56,549
Twitter style: Demar is one of the most active Raptor player on Twitter. He's posted almost 20 Tweets already today, many to fans. But quantity doesn't always mean quality - he doesn't offer much insight into his experiences on the Raptors beyond Tweets like "Dang, I'm not in the dunk contest this year?" But you definitely get a sense of his life outside of basketball, which seems to include a lot of YouTube videos and Call of Duty.

@IAmAmirJohnson
Amir Johnson
Followers: 16,141
Twitter style: Amir ReTweets his fellow players and photos from fans, and talks to fans and followers often. Also, if you're interested, he recently bought a Shake Weight - now that's insight you'd only find on Twitter.

@Sonny13
Sonny Weems
Followers: 15,686
Twitter style: Weems Tweets about basketball (duh), but also talks about his love for other sports (even curling) and interacts with fans.

Player Reggie Evans didn't make the list (he's only at 12,000 followers) but he often gives away tickets to games on his account, so make sure you follow. Andrea Bargnani might be a leading scorer on the team, but he hasn't passed the 10,000 follower mark yet - maybe he'll make the list next year. And the above players are just a few of the Raptors players on Twitter - they are many more engaged players, including Julian Wright and Jerryd Bayless. And, if you're interested, you can even follow The Raptor. Who wouldn't want to follow a mascot? 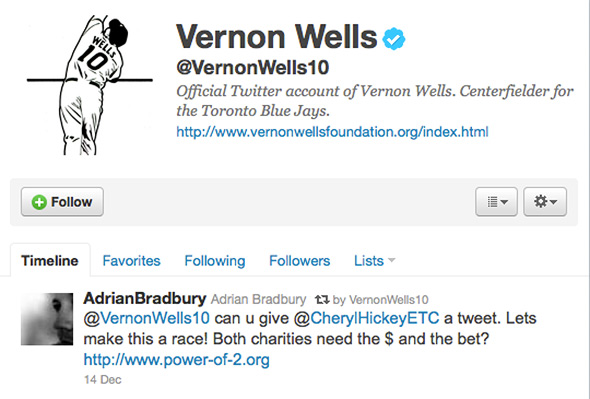 @lunchboxhero45
Travis Snider
Followers: 5,379
Twitter style: Obviously it's the off-season for the Jays, so the players can't give insight into the season. But Snider is still active, Tweeting to fans, other Jays players and even trying to get other Jays players on Twitter (we'll see if he can successfully sign Adam Lind up).

@VernonWells10
Vernon Wells
Followers: 5,238
Twitter style: Wells was active on Twitter until late December - maybe he just needs the 2011 season to kick him back into shape. He Tweeted to thank fans for birthday wishes, posted photos, and conversed a lot - even if they were short answers.

The Jays have several other players on Twitter, including Jesse Litsch, Brett Cecil and JP Arencibia, who are more active than the players mentioned above. It just goes to show that big following doesn't always equal better Tweets. 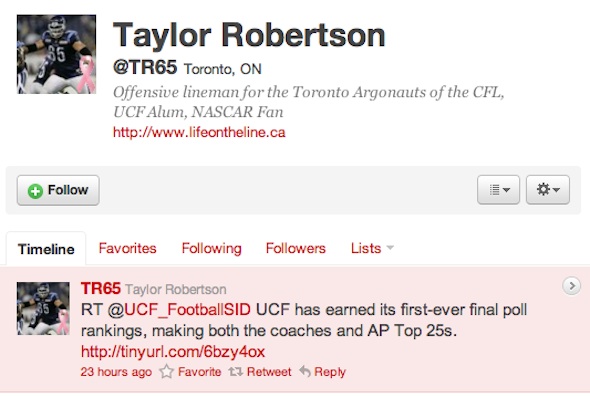 @TR65
Taylor Robertson
Followers: 529
Twitter style: Taylor might have a small following, but he's seen as the most tech-savvy guy on the team. He Tweets consistently, even in the off-season, and not just about football (Angry Birds, anyone?).

It's also interesting to note that Argos player Rob Murphy is also on Twitter at @BIGMURPH56, but he has protected his Tweets. I'm not surprised, after the CFL and Argos fined the offensive tackle earlier this year for some controversial Tweets he sent out while on a road trip to Montreal. 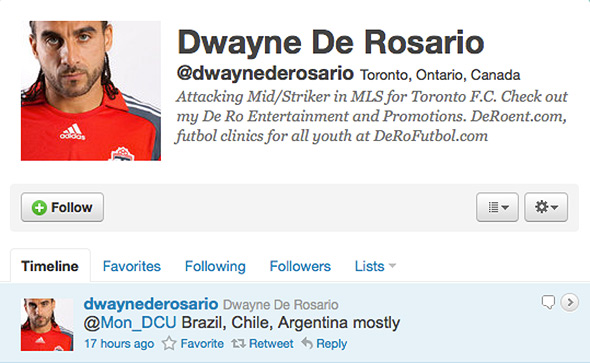 @dwaynederosario
Dwayne De Rosario
Followers: 10,964
Twitter style: De Rosario Tweets mostly about soccer (or 'futbol'), although I learned that he recently saw 127 Hours. He also told Drake to check out an FC game next summer - let's see if he takes him up on the offer...

So what about the teams' opinion of athletes on Twitter? After all, not all athletes are articulate or interesting, and not all stay consistently active. I've spoken to MLSE's social media guy Jonathan Sinden about it in the past, and he says they encourage Maple Leafs, Toronto FC and Raptors players to adopt Twitter, and there's no resistance from management. The CFL's Jaime Stein echoes Sinden, saying "The CFL views itself as a league that is accessible and authentic and having players interact with fans on Twitter is simply an extension of the CFL's brand statement 'This is OUR league.'"

He says the recent Tweet-up at the Grey Cup was a big success, and fans got to meet players they've followed and interacted with online all year long. The advantage of having players like Robertson interact online, he adds, is that they give an alternative to their "tough guy" personas. "The interesting aspect about Rob and Taylor on Twitter is that both players are seen as big, mean offensive linemen on the field, yet off the field they are two of the nicest guys you will meet. They do a great job interacting with not only Argonaut fans, but fans of all CFL teams."

So which athletes do you follow, if any? And more importantly, why?