Rob Ford and area councillor Gord Perks met with members of the Roncesvalles BIA earlier this afternoon so as to get a look at the state of the street and to listen to some of the community's worries and complaints regarding the yet to be finished construction in the area. Starting near Dundas at around noon, the small entourage of 25 or so people -- a number of whom were city officials and media types -- meandered slowly southward as Tony Cauch and other members of the BIA went over a series of concerns. 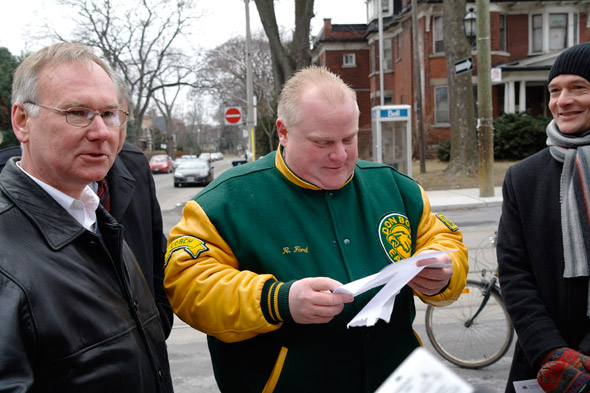 Not surprisingly, the most pressing item on the agenda was the completion date. Although work was supposed to be complete as of early December, construction has been put on hiatus over the winter. As such, the BIA is concerned that the new date (approximately 12 weeks from now) provided by the contractor, Sanscon Construction Ltd., can't be trusted. So disillusioned are they with the project that they expressed concern over its full completion by the Polish Festival in September, which Ford, whose wife is Polish, was also extended a formal invite to. 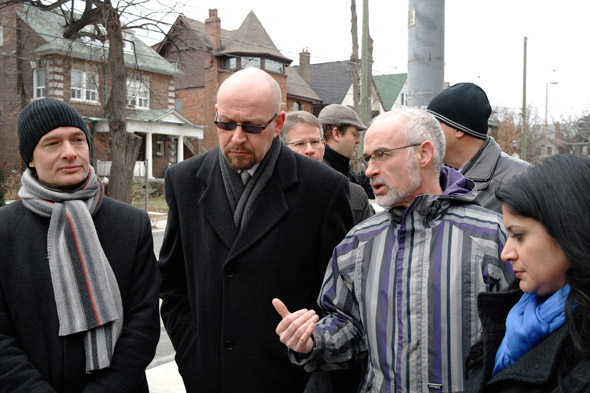 For his part, Ford listened patiently. Although he certainly didn't offer any promises regarding time lines, he did ask his staff to provide him with more regular updates when construction resumes in the spring. The only time that he got miffed was somewhat early on when he noticed that there were basically no garbage cans along the street. I couldn't tell if his rather obvious frustration was a bit of grandstanding or if it demonstrated that he failed to comprehend the recent history of inconvenience along the strip. Interestingly, the BIA members didn't seem particularly bothered about this issue. 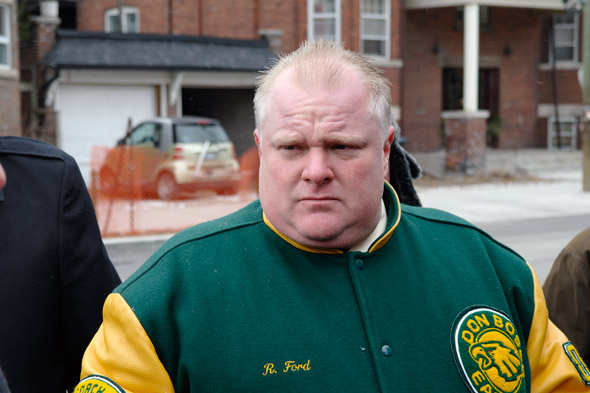 Other things discussed included the resolution of property damage claims, fixing the problems with streetcar flow and parked cars, implementing time-based transfers on Roncesvalles streetcars, and a request for tax relief for businesses affected by construction delays. 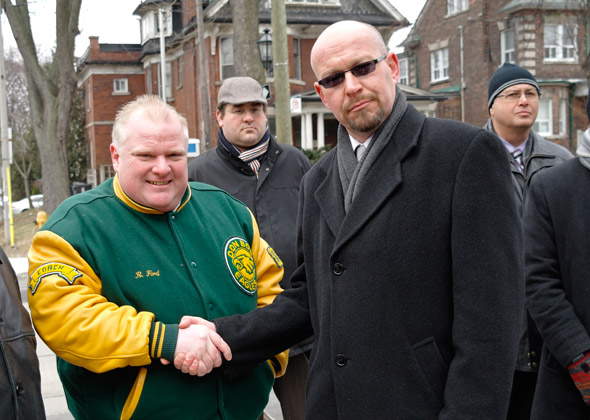 In all of these cases Ford promised to inquire about their feasibility with the relevant parties or to look into the matter with his staff. The question is, of course, will today's pow-wow have any long term impact? I understand the desire to have a forum with the new mayor and that if you shoot beyond your target it might just increase the chances of hitting it, but I couldn't help but think that there was very little accomplished on this walk aside from Ford's demonstration of sympathy and a little catharsis via complaint for the BIA.

Clearly Ford's visit indicates the degree to which he wants to make good on the claim that he'll be a hands-on mayor. And who knows, maybe just showing up and listening is enough -- that is, if they can get the construction wrapped for the new date.