A new poll conducted by Leger Marketing shows that 65 per cent of those surveyed believe that Transit City was an effective step forward in the development of public transportation in Toronto. But before this stat gets spun too quickly indicator of unabashed support for the LRT project, 44 per cent of respondents in the same poll voted in favour of building Rob Ford's subway plan versus 40 per cent who think that LRTs should be built.

What else is new? The LRT/subway debate has been trucking along for quite while now, and there's yet to be consensus on the best course of action to take. That's not to say, however, that this poll doesn't show some solidarity on the part of residents. When asked if "smart transit planning is done for the long term and should not be changed every time a new government is elected," 89 per cent of the sample agreed with the statement.

No big surprises there, but that's a point that our current and future (and even our past) politicians would do well to heed. As much as politicians like to put their own stamp on city-building initiatives like transit plans, it's just not possible to make any meaningful progress if the blueprint keeps getting torn up. The obviousness of this point often seems to elude those responsible for our future transit needs.

So, there's the rant of the day. As far as the rest of the poll goes, the other highlight is that those interviewed are in favour of keeping LRTs but putting more of them underground (44 per cent) versus scrapping the plan altogether and pursuing new subway lines (15 per cent). It's also probably worthy of note that this survey was conducted using Leger's online panel, which might mean it skews towards a younger demographic (no breakdown of the sample group is provided). 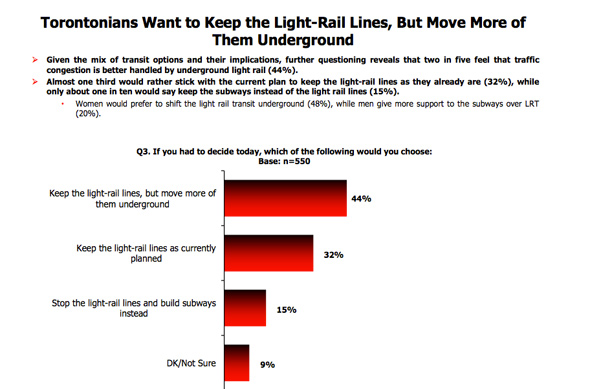 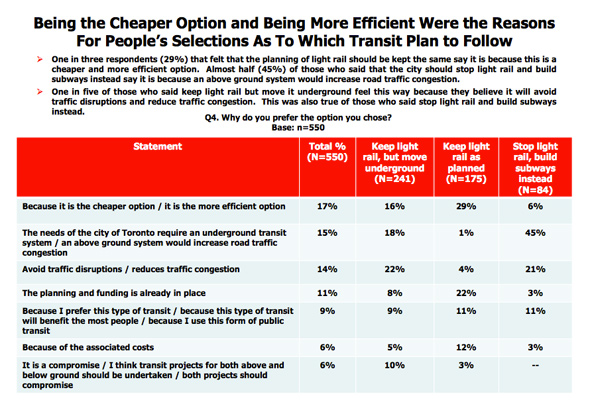