Is King and Peter Toronto's next hub intersection?

When he unveiled the plans for the Bisha hotel and condo complex late last year, clubland impresario Charles Khabouth predicted that the intersection of King West and Peter streets would be at the centre of a new downtown core, to no small derision. The idea stuck with me, however, and I decided to take a look at the crossroads to imagine just what will be happening here in the next few years that might be feeding Khabouth's optimism - besides owning a hotel in the vicinity.

King West and Peter was, for many years, the border between the modest redevelopment of the theatre district and the nether land of dusty warehouses and garment trade sweatshops, presided over by the old Westinghouse building, a minor architectural gem thanks mostly to the lines of stone ornamentation that redeem this otherwise unremarkable brick box. The arrival in 1990 of the infamous and architecturally unloved Holiday Inn on the northeast corner - now the more upscale Hyatt Regency - marked the beginning of downtown bursting its borders westward, and the last 15 years have seen the intersection ringed with new hotels, condos, office conversions of the old warehouses, and commercial high-rises like the RBC Dexia building. 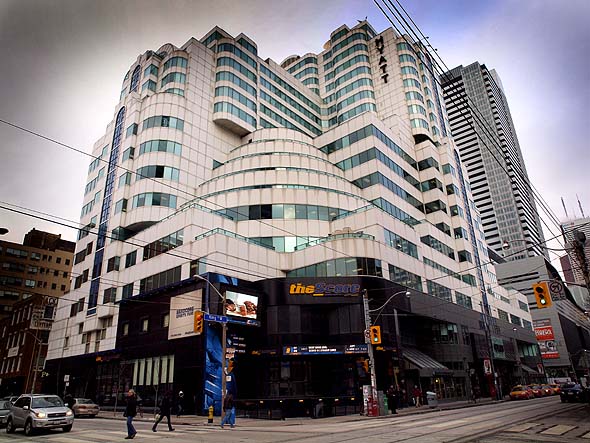 This is Ward 20 councillor Adam Vaughan's turf, and as far as he's concerned it the Bell Lightbox project one block east at John that kick-started the area's latest phase of rejuvenation. "There's a significant thrust of buildings that are moving up and around the TIFF block," Vaughan tells me, "but it's the TIFF building which is the epicentre of it all, where everything has been fashioned in relation to TIFF, because TIFF is the first tall building in the neighbourhood. Everything is leveraging or building or tying into the energy and the opportunity that TIFF created." 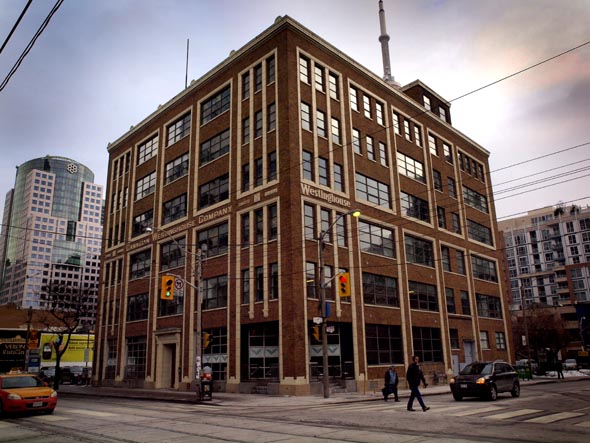 At the moment, however, it feels like the intersection is frozen in place, anticipating the next surge. The abandoned showroom for the M5V condos on the southwest corner has a zoning notice on it that Vaughan says is being put through right now, while the redevelopment of the site that now houses Wayne Gretzky's one block south at Mercer has been put forward by its owners, the Bitove Corporation. The Westinghouse building will be part of a condo complex from David Mirvish that'll feature the tallest building at the intersection - 48 storeys - and a theatre museum. 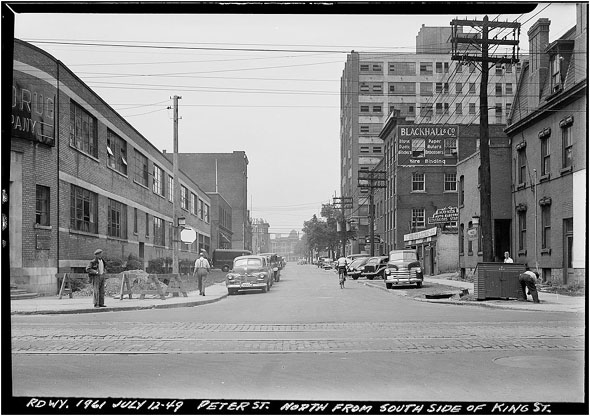 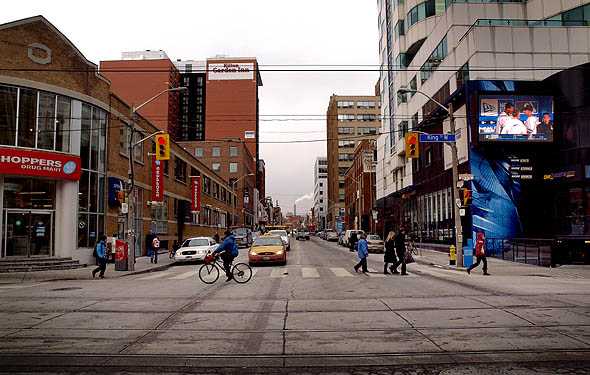 Right now, looking north at least, the area is remarkably well-preserved, at least compared with a 1949 Toronto Archives photo, with the most notable continuity at the intersection provided by the low, curving moderne building on the northwest corner, which seems to have been in the drug business for at least fifty years. It's hard to believe that this two-storey low rise will survive the next wave of redevelopment.

"I've been told, and you'd have to check with Shoppers Drug Mart, that that's the highest-grossing store, on the sales per square foot basis, in the Shoppers chain, which means it could stay that way for a long time," Adam Vaughan tells me. "It's unlikely that it'll stay that way for a long time. It's probably gonna be a redevelopment site - most of the sites of that nature in the neighbourhood are." 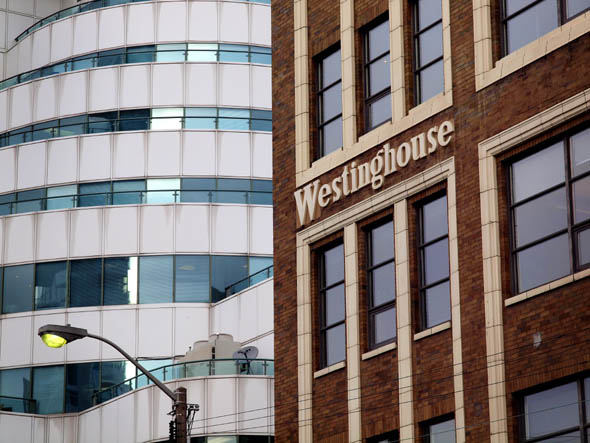 Vaughan says that council is doing its best to preserve the industrial nature of the area, in spite of all the new construction. "We have brought into play a heritage conservation district study that's going to get started during this term of council that will look into protecting the warehouse buildings in the neighbourhood and try to give them a level of protection and try not to generate a lot of redevelopment activity on those sites, and in the process preserve structures that have provided a home to a huge high tech industry and keep those areas humming on as the centre of Toronto's high tech industry. We don't want to lose those warehouses or the other jobs that come with them - the lawyers and the accounting services that accompany high tech and entertainment development."

There are no historical photos of Peter south of King - the stretch renamed Blue Jays Way in the early '90s - but it was once mostly railway lands and the unique mix of residence and industry that was typical of Toronto for most of its history. A search through Might's 1921 city directory shows residences peppered along Peter and King alongside businesses - two stables and a carriage maker, a lumber yard, several grocers, a printer, a bookbinder, a hat manufacturer, a tailoring supply and Concertola Manufacturing Ltd., a gramophone maker. 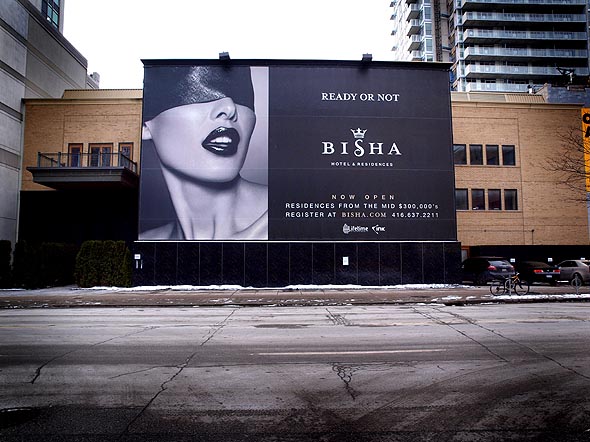 A little of this world will remain. Besides the Westinghouse building, which remains as part of the Mirvish proposal, the Bisha development will retain the facade of the building that was once the Diesel Playhouse and, before that, Second City's second Toronto home. At the Bisha press launch, Khabouth tells me that it was a private residence, built in the mid-1800s, before it was converted into warehouses. Right now it's hidden behind the billboard for the Bisha sales centre, but even when it was occupied, it was so altered that it might just as well have been a vaguely Georgian bit of architectural simulacrum, built from reclaimed brick. 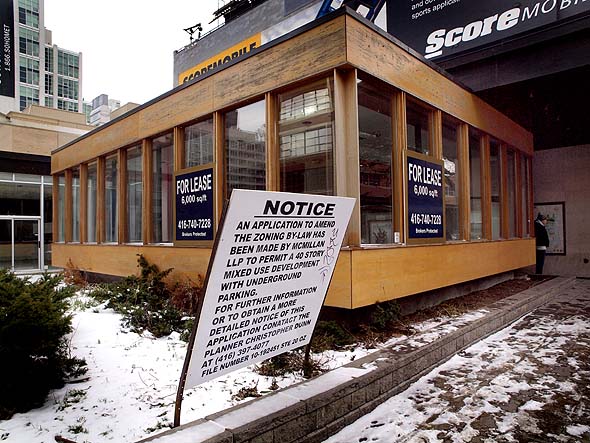 As for it being the new downtown, anything is possible. Toronto's centre has moved west and north in the century and a half since it was located roughly where Parliament meets Front, and there's no reason why any of the current contenders for Toronto's main crossroads - King and Bay, Yonge at Dundas and at Bloor - should retain their urban centre of gravity. Vaughan thinks that John Street, not Peter, has a stronger claim for becoming a new focal point, especially with all the newly-hyped initiatives to "turn John St. into the cultural corridor that'll link the waterfront to the AGO." 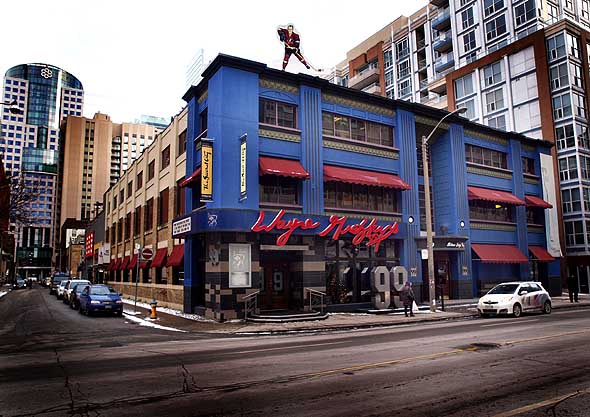 What was recently a neighbourhood of warehouses where the streets emptied out after 6pm has become thriving again, with an urban density far surpassing King and Peter 80 years ago. With that in mind, Vaughan has led initiatives to make sure that the Entertainment District isn't dominated by hotel rooms and one-bedroom condos, and has pushed developers to offer expandable, "family-sized" units in their buildings, and market rentals, such as the floor of affordable housing in Bisha, so that workers in the hotels have a chance to live in the neighbourhood where they work - a feature offered by the developers in exchange for extra density.

Charles Khabouth might be just one street off with his prediction that King and Peter will be the new downtown, though it's a minor quibble if the plans promoted by Vaughan and the Entertainment District BIA actually turn King West into a 24/7 hub for shoppers, workers, tourists and residents. There are no sure things in urban planning, but the transformation of this corner is as close as you get to a safe bet.