The Amalgamated Transit Union (ATU) Local 113's Facebook page is currently the site of an alternately humorous and scary discussion about the use of Facebook while on the job. It starts with an update from the administrator this morning: "Please avoid Facebook when your are on the job. Management is apparently checking members who are commenting on here and the TIMES and checking if they are on duty when the timed [sic] posts are being posted." And over the course of the day, a comment thread has developed, the highlight of which is likely the following: "Apparently, a subway operator left their cab open and someone caught that operator on their iPhone on camera and posted it on Youtube."

Although I've yet to locate any such video, this can't be good for the TTC. Just last week transit employees were warned that mayor Rob Ford might be paying visits to subway stations and work sites to ensure that no one was sleeping on the job (a plan the mayor's office denies was in place), and now it seems another PR problem might be on the rise. Although TTC spokesperson Brad Ross notes that "Facebook is blocked for most [TTC employees]" and that "the majority of ATU members are operators or maintenance employees and don't have access to computers on the job anyway," that doesn't eliminate the possibility that smartphones are being used, which is actually far more worrisome. 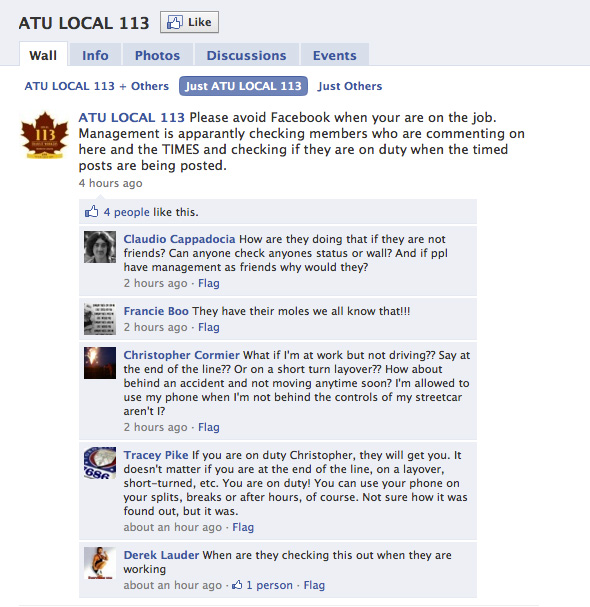 For the record, one thread on the 113's Facebook page does not signify there's actually a widespread problem here. Given the scrutiny that TTC workers face nowadays, it's understandable that they'd be a little paranoid about stuff like this. And, really, I could care less if administrative employees are sneaking a peek or two at social media sites while on the job (doesn't everybody who's not blocked?).

Vehicle operators are, however, a different story. While the argument could be made that when a vehicle is stopped, a quick phone check is no big deal (again, I'm sure tons of people do this when driving their car, myself included), the reality is that for better or worse, the public holds transit employees to higher standards than the average automobile driver. Sure both could get a ticket for using a phone while driving on Ontario roads, but there's no doubt that the perceived gravity of such an offence would be far greater in the case of a TTC employee.

In reference to whether or not management is actually looking into the Facebook usage of its employees, Ross reports that "no such directive has been given." It's thus difficult to determine whether this is indeed a real problem for the Commission or just a case of a few rumours being spread around amongst the Local 113. One thing's for sure, though. It's not particularly comforting from a passenger's standpoint.

Photo by tomms in the blogTO Flickr pool. And a hat tip to Laurence Lui who tweeted about this earlier today.