A typographical history of the Toronto subway system

A about a month ago I wrote a post on Jonathan Guy's TTC font posters, which I rather fortuitously discovered while searching through Flickr for something that I can no longer remember. Oddly, almost the exact same thing happened yesterday when I was trying to find historical images of the TTC on the website. Although I didn't locate the particular photo I was looking for, I did come across another poster devoted to typefaces on the TTC. What are the odds?

This one comes from Jose Ongpin and actually predates Guy's work. Upon finding this poster, I soon learned that it's actually a condensed version of a series of images uploaded to Flickr that represent the extensive research that Ongpin completed as part of a history of typography course at OCAD (not yet OCADU) in 2005-06. For the class, Ongpin created a timeline of the various typographical and tile styles employed in the subway system since it opened in 1954. 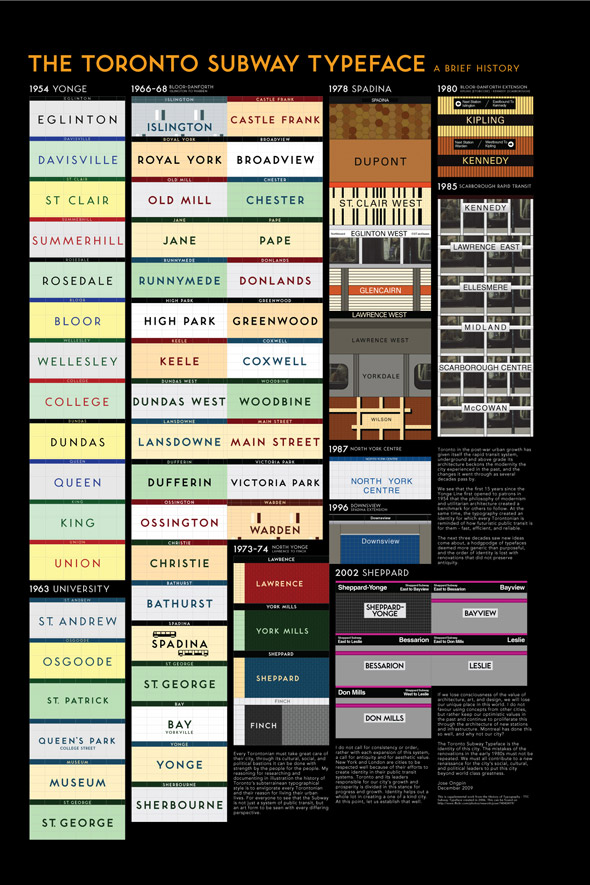 The original results of this research were reproduced in four separate pages, each of which were very popular (the first one has over 12,000 views). It appears, however, that it wasn't until about four years later that Ongpin put together the unified poster (in December 2009). This version, for whatever reason, didn't seem to attract much attention (so far as I can tell) and currently sits at 222 views.

That's a bit of a shame that I hope in some minor way to correct. Although not perhaps as aesthetically pleasing as Guy's poster of the 42 stations that still use the original subway font, there's something awfully cool about Ongpin's timeline. In fact, it wouldn't be a stretch that the two posters in question would make an ideal pair.

Take a look at the high resolution version of the poster here and for purchasing info go here.