Why I want subways, but would settle for Transit City

Mayor Rob Ford plans to dissolve "Transit City," former Mayor David Miller's plan to extend Toronto's existing transit systems to service the east and west ends of the GTA, and some of the north. Much has been written about the fact that the city has already spent about $130 million on "Transit City," while Ford has committed to new contracts in the amount of $1.38 Billion for his proposed transit plan.

It's no secret that Toronto is in a bind.

As the city's population burgeons, and transit infrastructure stagnates, Toronto now ranks among the top cities for longest daily commutes, alongside Los Angeles and New Delhi. Our current transit system needs to address this problem, but because the province has cut back funding, we have very little money to deal with our growing transit problem.

"Transit City" had much going for it: it planned to service Toronto's priority neighbourhoods, and to begin unify the GTA to create a more inclusive Toronto that caters to all of its boroughs. The LRT lines seemed to be the answer to limited funds and an immediate transit problem, offering purportedly better value for money than the more expensive subway route. There has also been much public outcry over the dissolution of "Transit City," with several sites petitioning to "Save Transit City."

But Ford, as he's made abundantly clear, has plans to stop "Transit city" in its tracks. While I applaud Ford for seeing in the subway a better long-term approach to transit, I resent his reasons for doing so: "Ladies and Gentlemen, the war on the car stops today." In fact, Ford's plans to build on the subway line (and that, too, in only a limited area -- east of Kennedy to Scarborough Town Centre, and east of Don Mills to connect with Kennedy) will cost the city roughly $250 Million per kilometre (some estimate more), money that the city simply doesn't have and that the province is highly unlikely to deliver. 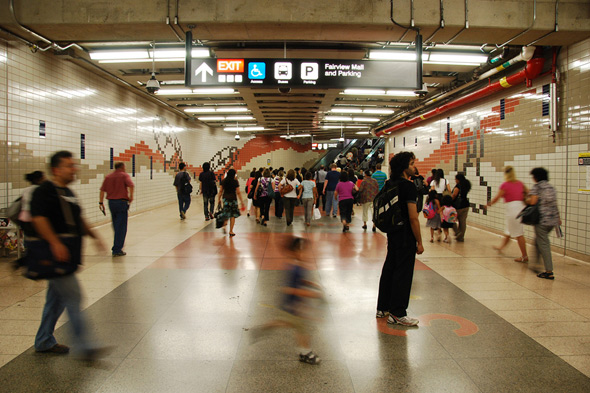 Ford's puny alterations are also not enough to address the city's need for transit, but I do think that he's right about subways over LRT. While I am in full support of a transit system that seeks to unify the GTA, and service priority neighbourhoods, I don't think that LRT is the best way to go over the long term -- and I'm not alone. Although LRT (Light Rail Transit) has worked in cities with cold weather (Ottawa, Manchester, Dublin), most LRTs are located in cities with rather temperate climes (San Jose, Palo Alto, Houston, etc.), which is unsurprising, given that train cars travel above ground, and are thus subject to the elements. What is more, LRTs tend to be located in those cities with a lower population density than Toronto.

The subway system is better than LRT because it's faster, more reliable, and is able to ferry more people around. I also view subway development as key in the city's overall development. If Toronto is to become a major player on the world's stage, then our subway system must support our growth. Paris, Chicago, London, Madrid, New York, Tokyo, all have fabulous subway systems. It's time that Toronto caught up.

I'd love to see "Transit City" in a subway form, and one that extends even beyond Miller's plans. As the recent election proved, Toronto is made up of more than just the downtown core, yet the gap between the core and the suburbs remains wide. Transit that acknowledges that the majority of Toronto's population lives outside the core would help close that gap in so many ways. Thus, our transit also must amalgamate with other borough-linked transit systems to unify the city (Viva, GO), to encourage people in places like Richmond Hill, Vaughan and Markham to use the subway system. And I want to see a revival of the former dream -- the Sheppard line -- which linked Sheppard to Downsview and promised to continue east to Kennedy (from Don Mills) and west to Humber College and the Airport.

But I can only dream. I know the reality, and, for the time being, agree, with reluctance, that "Transit City" is what we need.

If our mayors are like landlords of Toronto, Ford is a "spare-no-expense" type, whose long-term goals are laudable (if grossly misguided), but whose construction plans will remain half finished because he will run out of money in the middle of building (Ă la Mel Lastman). Miller and "Transit City" backers are the kindly landlords with good intentions, who make do with what they have: they may build clapboard extensions to their houses, but the renos will get done and will work just fine.

Photos by kevinseanw and PJ Mixer in the blogTO Flickr pool.