The Palace Pier dance hall represents to me one of Toronto's great - and unfortunately - lost landmarks. When I was living in New Toronto and passing the two condominium towers which inherited the name of the now demolished waterfront attraction, I was not familiar with the old landmark that used to stand on the same site. It wasn't until I acquired a vintage postcard depicting the place that I started to wonder about it. 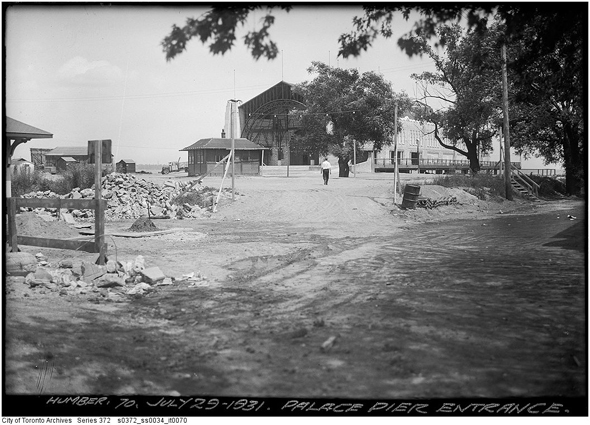 During the swing era of the 1930s and '40s, Toronto had a number of well attended dance halls - the Palais Royale, Columbus Hall, Club Esquire, Top Hat, Embassy, Mutual Arena, the Silver Slipper, and the most popular, Palace Pier, located west of the Sunnyside Amusement Park (today the site of the Sunnyside Park), at the mouth of the Humber River, in the Township of Etobicoke, then composed of many rural communities in the north and industrial ones in the south. 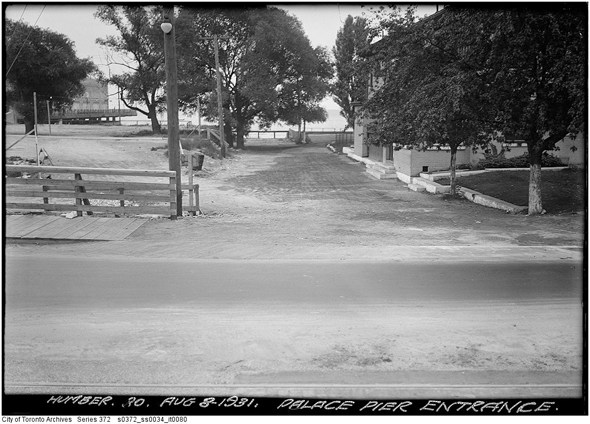 In the summer of 1927, the Provincial Improvement Corporation released a plan to construct a "year-round amusement enterprise" that was to include four buildings housing 260-foot long, all-year ballroom, 260-foot long Palace of Fun (with a games arcade, along with a variety of shops, food stands, and restaurants), 1500-seat theatre, and 170-foot long bandstand. This structure was proposed to stand on a pier with several walkways and promenades that would reach a third of a mile out into the lake and allow from access by water. Similar and highly popular waterside amusements of this type were also built in England, and this is where the idea originated for a similar attraction for Toronto. 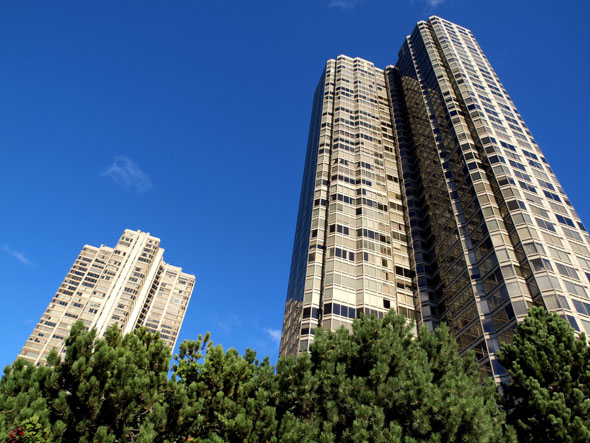 The construction started in 1931, when Arthur Meighen, former Canadian prime minister, laid the cornerstone of the first building, the ballroom. However, the final result, after years of litigation, was much smaller than the original grand plan and came to include only the ballroom. It was only three hundred meters, a far cry from that envisioned third of a mile. It opened in the spring of 1941 as a roller rink, and not a dance hall, named Strathcona Palace Pier. Later, it was also known as the Queensway Ballroom and after that, the Humber Pier Ballroom. The heyday of the landmark was its days as a dance hall, going back to its original name, Palace Pier, holding big band dances, until it burned down in a fire set by an arsonist on January 7, 1963.

Palace Pier Tower (North Tower), a luxurious, 46-storey condominium complex, was designed by Edward I. Richmond, and built in 1978 on the site of the former ballroom, and in 1991, the Palace Pier Place (South Tower), an accompanying condo tower, was completed. As far as condos go, they're both iconic buildings, but they'll never have anything on the original inhabitant of the land.

Postcard from the author's collection. Photo of Humber Bay by Danielle Scott in the blogTO Flickr pool. Photo of the Palace Pier Towers by Rick McGinnis. Archival photographs from the City of Toronto Archives.