Is this the quintessential example of the Toronto dialect?

A few months ago I asked the question of whether or not there's such a thing as a Toronto accent. Although I arrived at no conclusive answer, there were some interesting ideas thrown around in the comments section of that post and one very bad example of an accent-expert trying to demonstrate what we're supposed to sound like. Well, the subject is back on my mind today after I encountered this super-weird map of North American English Dialects.

According to the author Rick Aschmann, Toronto falls in line with most of Canada with the exception Atlantic Canada. Though I've always thought that people from regions north of Toronto have a slightly different dialect, this main split seems to be agreed upon, so no criticisms here. 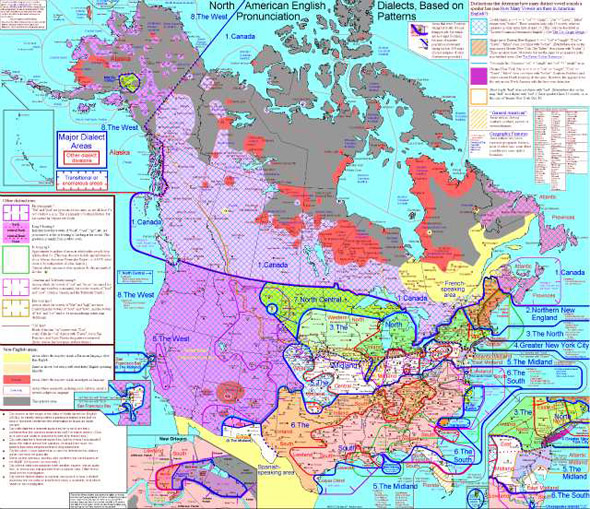 What I find most interesting/problematic about the map, however, is the ambassador who's been selected to demonstrate our way of speaking. By clicking on a region on the map one is brought to a long list of speech samples via YouTube clips. Our representative is professional cyclist Michael Barry (see clip below). As much as I like him, this strikes me as an odd choice, given that Barry -- as far as I know -- hasn't lived in Toronto for years. As ProTour rider, he splits his time between Colorado and Girona (Spain).

I'm no expert, so perhaps the fact that he doesn't live here hasn't had an impact on his pronunciation patterns, but listening to his voice, I just don't hear "Toronto." That's a completely subjective call, of course -- but given how thorough this mapmaker clearly hopes to be, I have to say that this is a miss. But, hey, the map is damn entertaining at the very least.