How many cellular towers are there in Toronto?

The number of cellular towers in Toronto is one of those strange and somewhat trivial things that I wonder about once in while. About a month ago I wanted to know how much it costs to rent Lower Bay Station, which turned out to be rather easy to find out. This tower question, however, had been posing a bit of a problem until earlier today.

Although there are good Google-based maps that chart the locations of towers throughout Canada and Southern Ontario, a bit of emailing revealed that the creators don't necessarily track the total number of transmitters in each locality. But given that this is precisely what interested me, I was resigned to the fact that I might just have to do some pain in the ass counting.

Delivering me from this fate, however, is the a map that I've recently discovered by Spatial Databox, "a web service that delivers location-based content to map-based client applications." Unlike the other maps I've seen, the Spatial Databox uses data from Industry Canada to offer numeric summaries for various regions that change in accordance with the (virtual) distance from which one views the map. 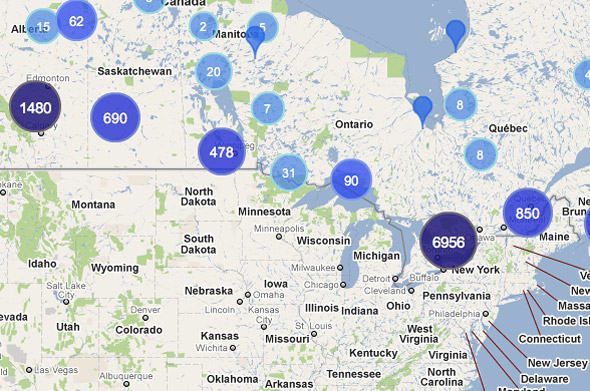 So, case in point, when one is zoomed rather far out, it becomes clear that the GTA has about 3676 cellular towers. Zooming in a bit, on the other hand, reveals that the city of Toronto itself has 1193. But coolest of all is what one sees when he gets in really close: areas where there are clusters of towers (see lead image). Now I'm not particularly worried the potential health risks posed by the radio emissions emanating from these things -- I've actually morphed into a half-computer/half-human hybrid since I started writing for blogTO -- but for those who want to monitor such things, this map (and the others like it) do more that just satisfy curiosity: they can be quite useful tools when selecting a place to live.

Oh, and if you've ever wondered how many Starbucks there are are across the globe, they've got that covered, too (see below). Now that's scary... 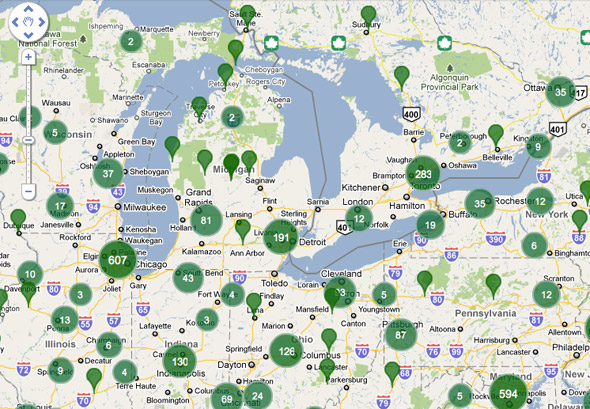