What ever happened to the Queen Street Subway Line?

As I was shooting the photographs for my story on the questions that surround the future of the Dufferin underpass at Queen, I noticed something that had previously eluded my attention. On the northeast side of the bridge, right where the limestone begins, is a monument that reads "Queen Street Subway" followed by "R.J. Fleming, Mayor" and "E.H. Keating, City Engineer" and the year "1897."

When I saw this, I immediately did a double take. I was aware, of course, that there were once plans to build a Queen Subway Line, but the year 1897 didn't seem to make much sense. Sure enough, the sculpted plaque has nothing to do with the aborted subway line, but is the inscription for the underpass that I was writing the story on, the lot of which used to be referred to as subways. 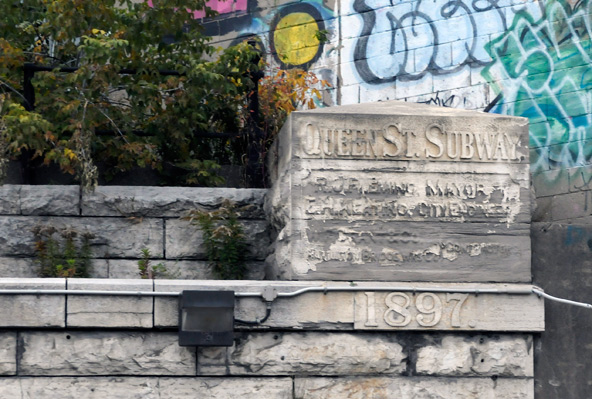 After I sorted this bit of nonsense out, however, I was compelled to take another look at the plans for the ill-fated subway line that would have serviced passengers traveling east/west throughout the core of the city.

Now, lots of great, in-depth stuff has been written about this project, so I'll confine myself to a quick little overview with links to further reading.

The idea for a subway line on Queen dates back to 1942, when the the TTC put together a proposal for two streetcar subways, one running north/south between Bay and Yonge, and the other running east/west along Queen Street. Eventually, the decision was made (in 1945) to build a heavy-rail subway for the north/south route, while the Queen line would still be serviced by streetcars.

According to Mark Osbaldeston, author of Unbuilt Toronto: A History of the City that Might Have Been, "It would run as its own right-of-way between Trinity-Bellwoods Park and and Logan Avenue. For most of the route, this right-of-way would be in an open trench, generally behind the buildings fronting the north side of Queen, but the sections between University Avenue and Church Street would be located in a tunnel." 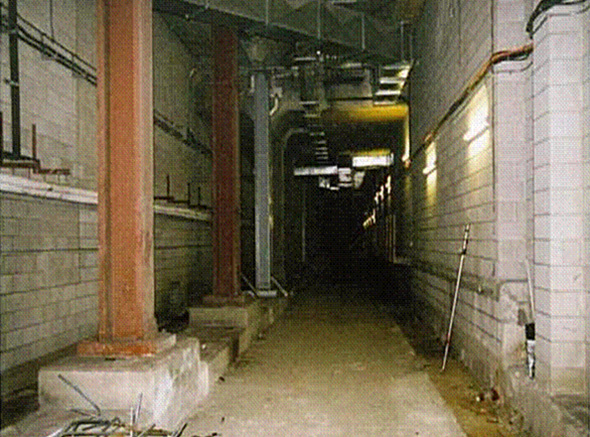 Believe it or not, a small portion of that tunnel was actually built during the construction of the Yonge Subway Line at a cost of around $5-million. Underneath Queen Station on the current YUS line sits the shell of City Hall Station, the one and only portion of the line that was built.

So what happened to the Queen Subway Line?

Not so long after the original proposals, the TTC started thinking about the need to increase service through midtown. As Osbaldeston notes, two competing visions for a midtown route of thus arose. Allan Lamport, TTC chair at the time, advocated a straight line running underneath Bloor/Danforth (as we have today), while Frederick Gardiner wanted a U-shaped line that would service midtown before dipping to Queen throughout the core (from Christie to Pape). 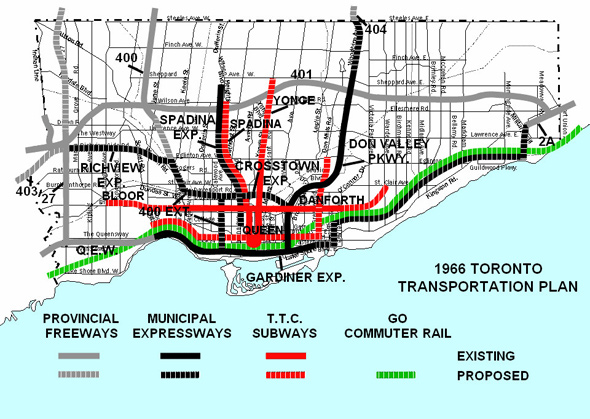 Ultimately, Lamport's straight line won the day, but even then the Queen line wasn't dead. It still appears as late as 1966 on the official plan for Metro Toronto (as a full subway line). Over the next decade or so, however, the priority placed on the construction of the line began to wane. Pressure increased to extend the Yonge line north of Eglinton and up the Spadina side north of St. George.

Although the TTC approved the construction of the Queen Subway Line in 1973, with three quarters of the money for the project to come from the Ontario government, it was once again delayed on account of the province's desire to see the results of a study of Toronto's transportation needs. When the final results of that study were released two years later, it was concluded that the passenger demand along Queen just didn't warrant the construction of a subway line.

That was basically it. When Metro's official plan was released in 1980, the Queen subway was nowhere to be found. And yet, even to this day, with the route of a future Downtown Relief Line up in the air, speculation regarding the construction under Queen Street remains. Who knows? Maybe at some point in the future, they'll even find a use for the partially built City Hall Station.

Images from the City of Toronto, Wikimedia Commons and the gettorontomoving.ca.