Tilt-shift photographs of Toronto often depict the city in an unfamiliar and thus compelling light. More about fun than serious art, with the advent of easy-to-use digital processing, the technique -- or, perhaps more accurately, the effect -- has become hugely popular. There's even iPhone apps that allow users to quickly transform their photographs into miniature scenes through the artificial control of an image's depth of field.

Indeed, the vast majority of so-called "tilt-shift" images out there nowadays are really no such thing. Not that this is necessarily a bad thing: even if purists turn their nose up at it, Photoshop magicians can mimic the effect produced by the actual movements of a camera lens with surprising proficiency. And, if one wants to get picky, the authentic technique that makes a scene look like a miniature isn't really the combination of tilting and shifting the lens so much as just tilting it anyway.

If this sounds a tad technical, perhaps the easiest way to explain how these photographs work is to demonstrate how they trick our eyes into thinking everything looks small. If you bring your finger to within an three or four inches of your eye and try to focus on it, you'll notice that everything in your peripheral vision has gone blurry. Now, if you pull it back as far as you can from your eyes, you should notice that objects in your peripheral vision appear sharper.

Tilt-shift photography is thus something of an optical illusion that plays on our perception of depth of field (i.e. how our eyes selectively focus) and the position of height from which such photographs are almost invariably taken. In natural scenes (a.k.a the real world), one only experiences this shallow depth of field when an object is very close to his or her face. Combine this with a semi-vertical perspective, and those objects that remain in focus will appear to be very small.

Not everyone's a fan of tilt-shift work, but when it's pulled off well I think it makes for intriguing images. And not just because the eye is drawn in by the shallow depth of field, but because of the degree to which the miniature-effect renders the familiar strange.

Here's a collection from the blogTO Flickr pool, including a few attempts of my own. Lead photo by mgerskup. 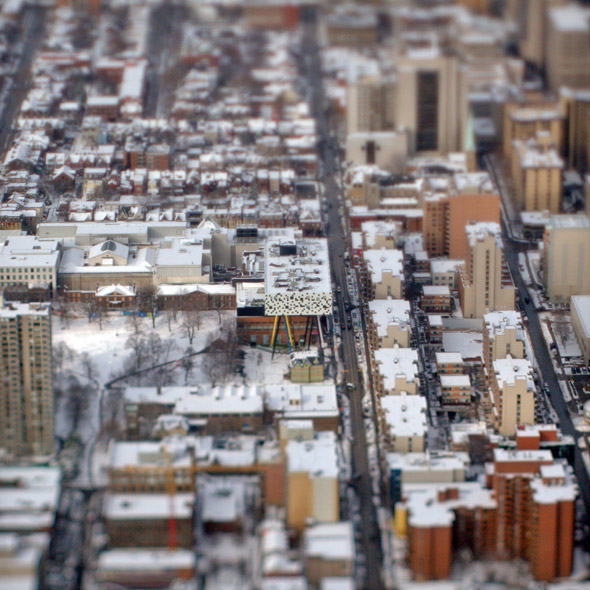 Doing it old school is bigdaddyhame. 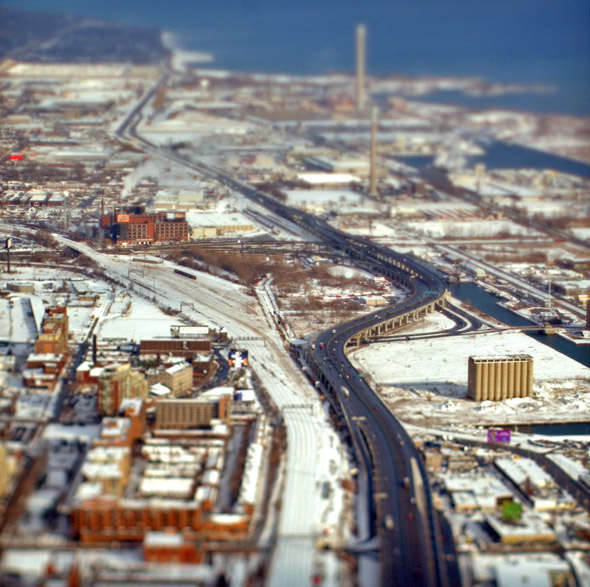 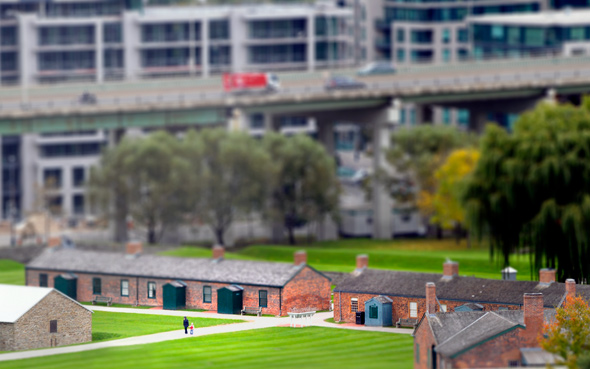 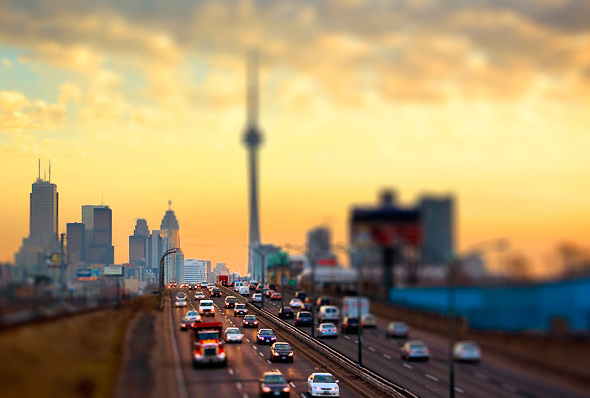 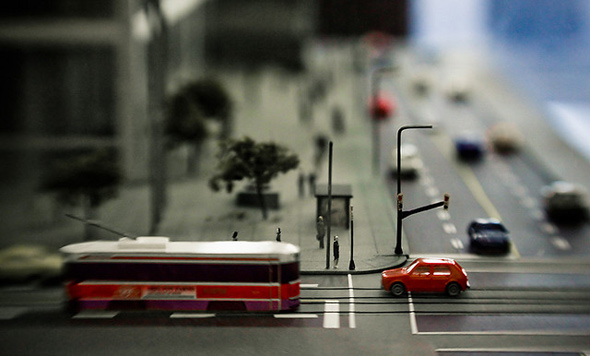 Tilt-shift and models by tomms. 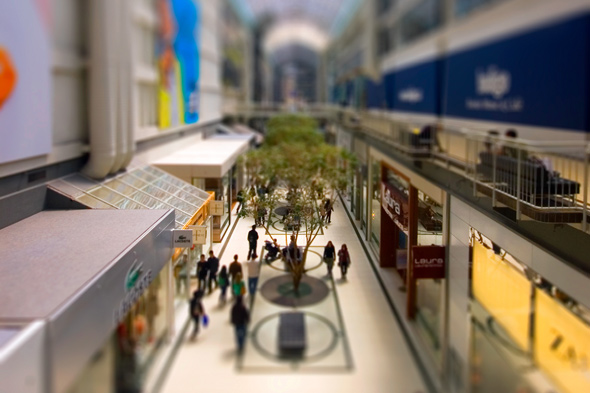 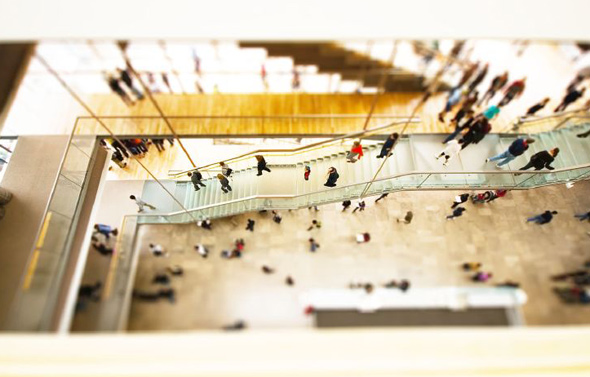 Photo by Somewhere in Toronto. 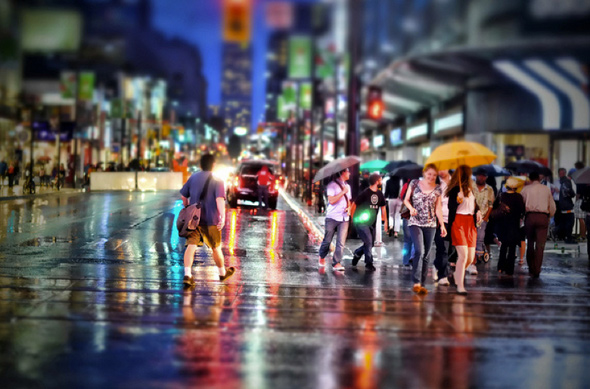 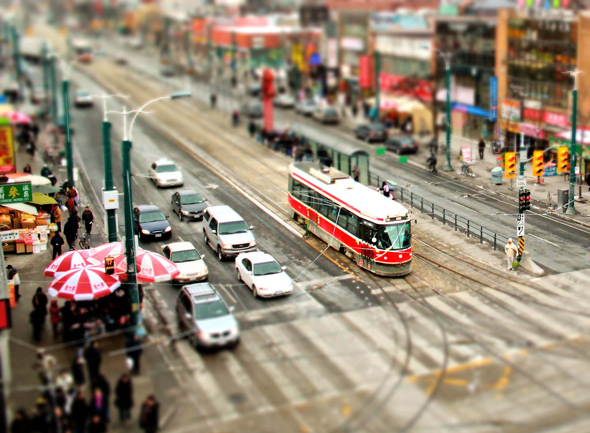 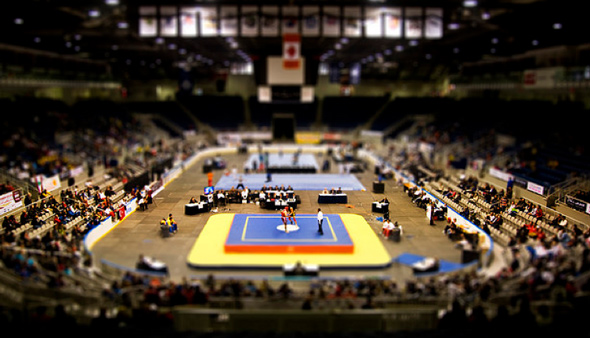 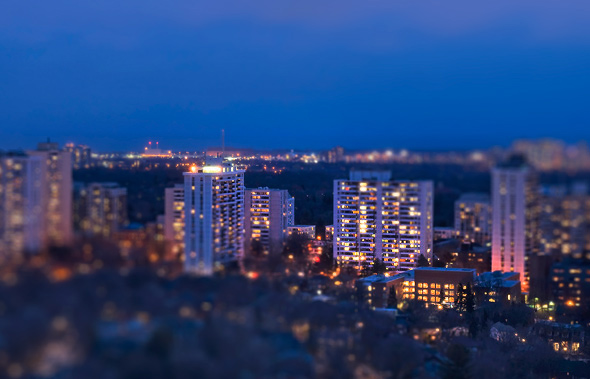