The top 10 moments in Toronto sports

The top 10 moments in Toronto sports history came to mind while watching the Leafs win in overtime last Friday. Something about their great start piqued my sense of historical curiosity, so I tried to recall some of the big moments that I could remember. I did pretty well, pulling together seven of the 10 entries on this list from memory, while a little research and discussions with friends filled in the rest.

Like any list, this one is subjective. But, I should note one major proviso right from the start. This list represents those moments and events that have happened post-1967. The reasoning for this is twofold: on the one hand I think it'll make the list more relevant to readers and, on the other, 1967 seemed like a good date to separate the "old" and "new" eras, what with the Leafs record of futility since then.

So here they are, not in any particular order except for number one.

Even if Toronto isn't a city in love with baseball -- in particular since the 1994-95 strike -- this takes top on my list because, well, you know, it's a championship win. Needless to say, the Raptors and the Leafs haven't delivered one of those during the time period in question. But, over and above just going all the way, the 1993 win was done in the most dramatic style imaginable: a home run in the bottom of the ninth inning. I still remember watching in astonishment and glee as Joe Carter ended the series and the SkyDome went bananas. Their win the prior year was every bit as good, just not quite as dramatic.

Despite the lack of overall team accomplishments, over the years there have been a handful of elite Leafs players who have distinguish themselves with team and NHL records. Though none of them were that pretty by today's standards, Darryl Sittler's 10-point night against the Bruins will probably stand for sometime as the most points in a single game (14 players have had eight). Sittler potted a double hat trick and added four assists on a night when the expression "everything he touches goes in" was almost true.

Even if the whole thing felt too contrived, when Donovan Bailey matched up against American Michael Johnson in a 150 metre sprint to determine who was the "fastest man alive" the spectacle alone was worth tuning in. Johnson notoriously pulled up at around the 110-metre mark, but a defiant Bailey didn't buy that he had pulled a muscle in his quadriceps. "I think what we should do is run this race all over again, so I can kick his ass one more time," he remarked in a post-race interview. And though his arrogant side was on full display, all that mattered was that he had won.

The Toronto Raptors are born, 1995 season

Although they spent their first four seasons playing out of the SkyDome and their name will forever be associated with the popularity of Jurassic Park, it's hard to remember the city's professional sports scene without the Raptors. Playoff success has been virtually non-existent, but there have been highlights over the years, from beating the Bulls in their inaugural season, to the athleticism of Vince Carter and the steady development of the recently departed Chris Bosh. Better things are surely in store for the franchise, but having NBA basketball in Toronto ain't too bad either.

Like the Raptors, TFC is now an integral part of Toronto's sports landscape. I have to admit I didn't expect MLS soccer to catch on the way it has, but it wouldn't be stretch to say that TFC fans are the best in the city. Sure the Leafs have the largest following by a landslide, but with skyrocketing ticket prices, the live games just aren't as accessible or fun. Although the team has yet to make it to the postseason, they have won the last two Canadian Championships.

I was hesitant to add a golf moment to this list, but Tiger Wood's six iron from the fairway bunker on the 72nd hole of the 2000 Canadian Open was just to good to leave off. This was, of course, during the period in which Tiger was best known for drama inside the ropes rather than his extra-marital affairs, and as far as excitement in golf goes, this is near the top. Golfers at Glen Abbey still bang six irons out of the same fairway bunker in a mostly futile attempt to recreate the shot to this day.

While Mats Sundin couldn't bring the Leafs to the promised land, fans slowly warmed to him over the years. He was never an outright superstar, but always managed to put up point-per-game numbers and was remarkably durable, which along with a long tenure in a Leaf uniform helped him to eclipse the previously mentioned Darryl Sittler as the club's all time leading scorer. It wasn't much of goal when it happened, but the ovation was a nice moment for the much-maligned captain.

This one makes the list partially account of personal nostalgia. I was actually at the final game of the season with the Beavers (remember them) watching from the bleachers at Exhibition stadium, and I kept the pennant that I got at the game for years. Although they'd later go on to get crushed by the Kansas City Royals, this was the best moment in Jays history until their first world series win 1992.

This one is a bit of a cheat insofar as the game was played in Hamilton. But, given that the arena was filled with Toronto fans, I include it here. Besides, hockey glory has almost entirely eluded Toronto since 1967, so the 1987 Canada Cup win was quite special for local fans. Not only did they get to see what some call the best hockey ever played, but this was the only occasion in which Lemieux and Gretzky played on the same line in any meaningful way. 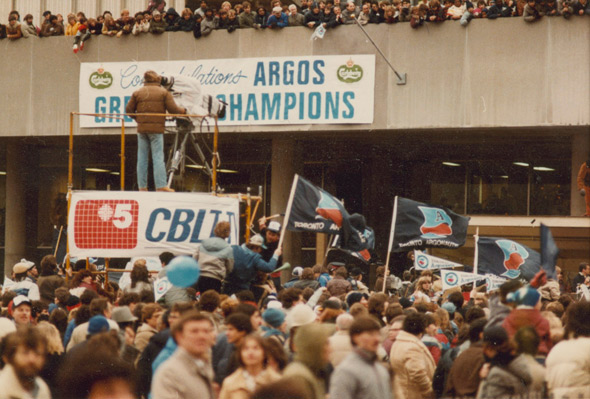 It wouldn't be right not to include the Argos in a list of this nature, and like the Jays win of the AL East in 1985, I remember this one, too. Well, not the game so much, but the parade that made it all the way up to Yonge and Davisville (and beyond). At the time I couldn't understand what all the fuss was about, and, sadly for Argos fans, I'd imagine that's how many would feel today were they to win this year. But, forgetting their current lack of popularity, back then it was a huge deal. All you could hear on Yonge Street was that extended moan of "Argos."