With it being Thanksgiving and all, I keep the politics light and the food-focus heavy. Happy long weekend!

"Toronto is our home and you don't trash talk your home." - Peggy Nash of the Canadian Auto Workers union on the OneToronto campaign to get the rhetoric of the mayoral campaign out of the gutter.

"We want this practice stopped completely.... Slaughtered horses are being treated with drugs and substances which are banned from entering the human food chain." - Bob Timmons, of Ocean Activist United, who protested the sale of horse meat outside the Beer Bistro early last week.

"I would like to reassure people that [they] will not be facing fines tomorrow for parking in their driveways." - Gary Wright, Toronto's chief city planner, on a new by-law that restricts the number of vehicles that people can be park in their driveways.

"This is probably a first for the OPP and for Highway 407" - OPP Constable Peter Leon referring to a plane that made an emergency landing on the 407 Saturday night.

"The backlash against hipsters has begun" - The headline of Leah McLaren's latest article in the Globe and Mail, which demonstrates 1) that the author has has been living under a rock for the last five years and 2) that Globe commenters can be as ruthless as our very own.

xoTO - A new slogan and twitter hashtag Toronto is using to celebrate the city. What do you think? Is it any good? Too derivative? 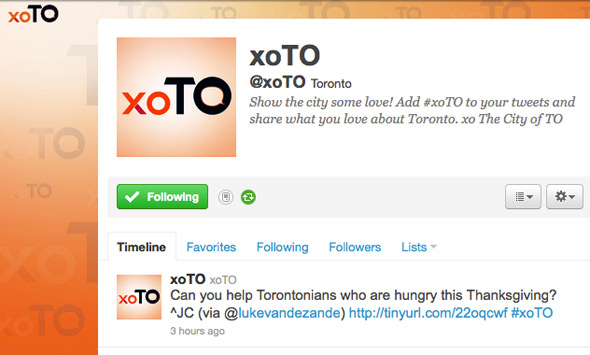 19 - The number of tickets sold to Mayor Miller's farewell address before it was cancelled due to poor sales.

$4.99 - The price per pound of an organic turkey from Oliffe Butchers.

15 - The number of flights Air Canada plans to offer between Montreal and Toronto via the Island airport.

Shot on a t2i, 7D and XH A1, and edited down from 12 hours of source footage, this is the video that opened the 2010 TEDxToronto conference. It's quite the little XO for TO in its own right.

TEDxToronto - Event Opening Video from The Biz Media on Vimeo.