The 1950s is, to me, one of the most interesting decades in the history of Toronto, but so far I have written mostly about that period solely from the perspective of the urban sprawl sprouted up at the time. And since Friday marked the 56th anniversary of the disaster known as Hurricane Hazel, I thought that it might provide a good opportunity to expand beyond my previous emphasis on suburbanization. 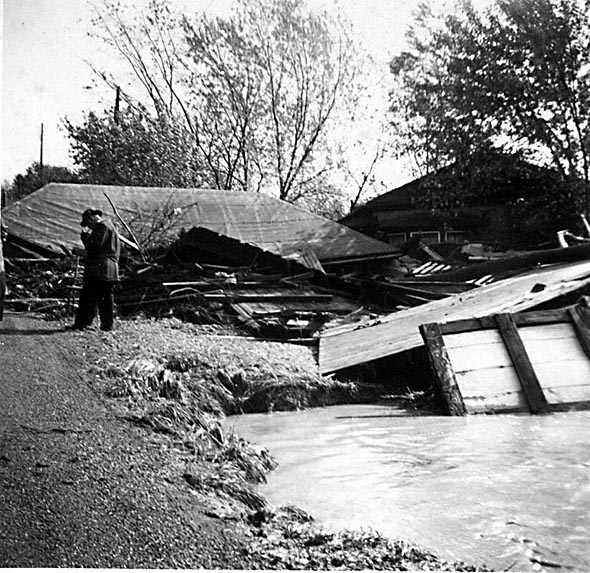 According to Jim Gifford's Hurricane Hazel: Canada's Storm of the Century, in 1954 Toronto's population was close to one million and was rapidly expanding. The Yonge subway line opened in March and was carrying passengers daily from Union Station downtown to Eglinton Station in the north. Televisions sets started to appear in increasing numbers of Toronto's living rooms, and the city had one local station, CBLT (Channel 9), owned by the CBC, which began broadcasting on September 8, 1952. 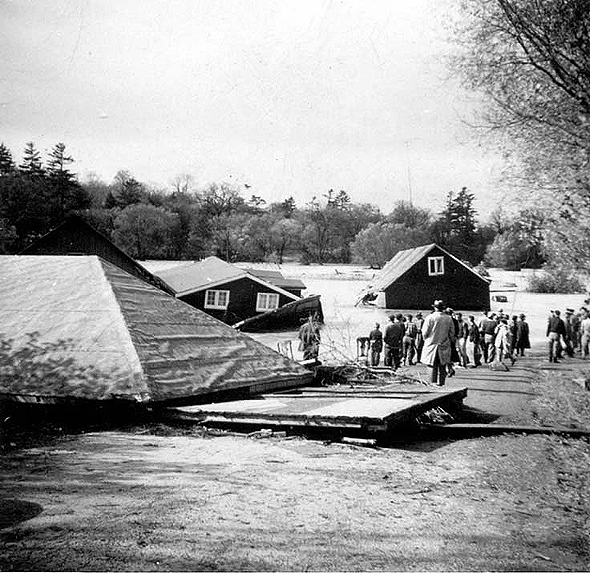 Nevertheless, the storm came unexpectedly. The evening forecast for October 15 indicated more rain, as it had been raining for the three days prior to this date. Although Toronto newspapers had been reporting on the damage that Hazel caused Haiti and in the Dominican Republic, many Torontonians were aware that hurricanes rarely reach Ontario. 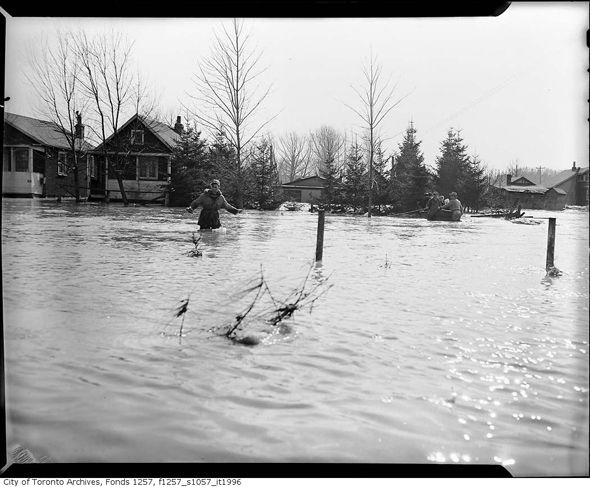 Hazel officially descended on the city at 11:00 pm, but the storm that served as the prelude to it had already caused considerable damage and stranded thousands of people: roads and underpasses were flooded and water started to flood basements, especially in the west end. Streets were blocked with cars that became stuck in the traffic, and those unable to move anywhere climbed onto cars and trees, hoping to withstand the worst. 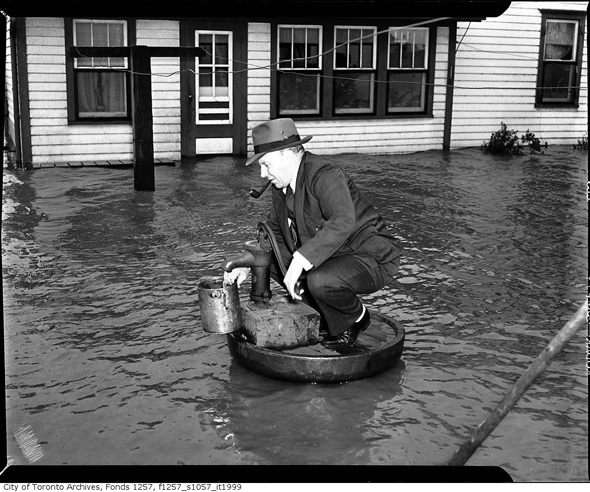 Not surprisingly, there appears to be a varying range of experiences of Torontonians of the night of October 15. Many merely slept through what they remembered as a terrible rainstorm, waking up to a city that was dramatically changed overnight. For others, it was most likely one of the most traumatic experiences of their lives, as they witnessed houses being uprooted from their foundations. Many also were stranded on their rooftops and others tried to hold onto anything that would prevented them from being carried by the powerful current. Downtown Toronto is described as resembling Venice throughout the night. 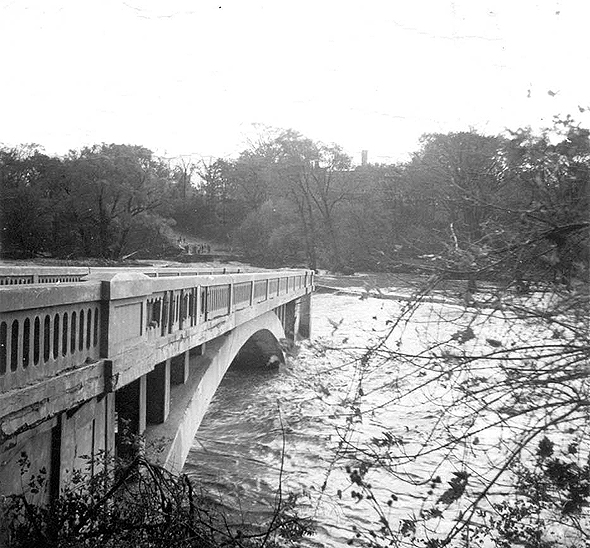 The west end received the deadliest hit of the storm, and especially the communities surround the Humber River: Weston, Swansea, Mimico, New Toronto, and Long Branch. Raymore Drive, a residential street in Weston, near Lawrence Avenue West and Scarlett Road, was nearly wiped out, mainly due to its close proximity to the Humber River. 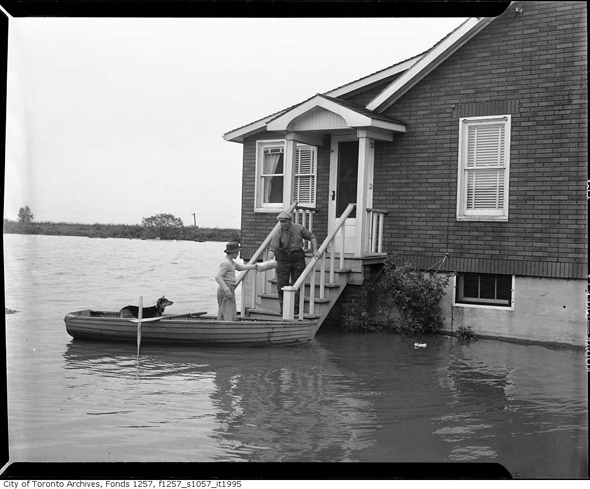 The rescue efforts are remembered as highly commendable. Many Torontonians, who felt that their families were safe, left their homes and volunteered throughout the night, helping policemen and the firefighters in locating the survivors. Others assisted by preparing food and refreshments to those involved in the rescue efforts, and Red Cross workers were also helping. 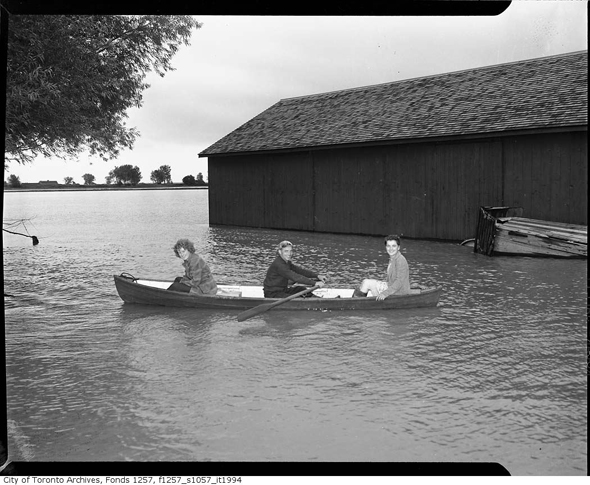 Some even lost their lives in trying to save others. Five firefighters, Frank Mercer, Clarence Collins, Roy Oliver, Jim Britton, Dave Palmateer, and Angus Small, died when they dispatched to rescue distress call from a group of people stranded on top of a car, a mile south of Dundas Street West, near Bloor Street. 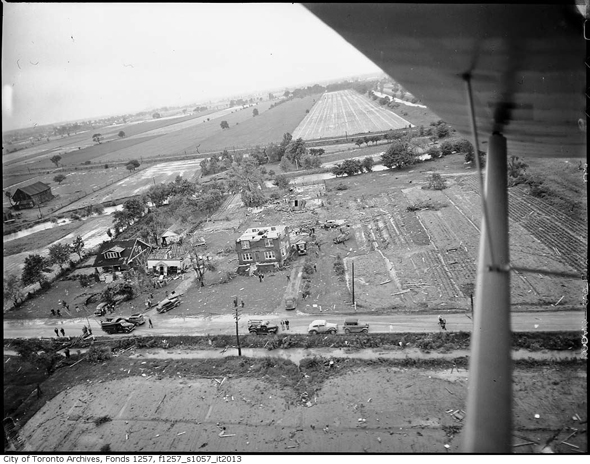 Hurricane Hazel was the worst flooding that Toronto had experienced in two hundred years. Over eight inches of rain, millions of gallons of water, fell into the watershed of the Humber River. During the span of 48 hours, approximately 280 milliliters of rain had fallen. Eighty-one people died as the result of the flooding and almost four thousand people lost their homes, while the damage was estimated at $25 million.

In the aftermath of the storm, the City expropriated much of the land in heavily flooded areas, converting it into parkland so as to prevent development on floodplains. 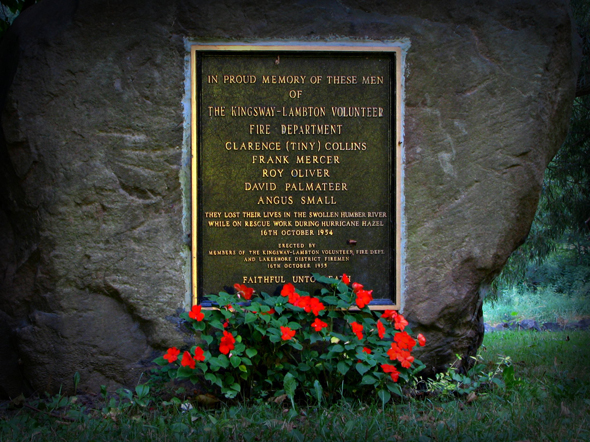 Images from the Wikimedia Commons and City of Toronto Archives.