How to deal with stray cats in Toronto

Toronto has a significant problem with stray and feral cats, as I've recently learned in a firsthand capacity. Although it's nearly impossible to pin down the population of these animals, some estimates run up to six figures. Until a couple weeks ago, such a number would have struck me as spectacularly high, but now, as my neighbourhood experiences its own stray cat explosion, it doesn't seem so far fetched.

It all started when two sympathetic looking cats started hanging around the house in which my partner and I rent an apartment. At first I would see them only once in a while, but as these street-savvy creatures learned that our multi-tenant home produced some pretty fantastic garbage (an incident with hardly eaten pork ribs comes to mind), I'm pretty sure they set up shop underneath our front porch.

As garbage day came and went, the two cats made more regular appearances at our back door looking for food. For a few days we resisted the urge to feed them. But, sure enough, the sight of these skinny things eventually broke us down and we started giving them some of the "treats" we feed our own cats. This too lasted a short while before we starting buying extra bags of cat food at the grocery store.

This seemed to make everyone happy for a few days. We felt like good solid people, and, judging by how voraciously they devoured the new food, the cats were at least a little less hungry. A few days later, however, things got a bit more complicated. For one thing, leaving cat food outside overnight in an area where raccoon visits are frequent isn't a particularly smart thing to do. Not only do they power through whatever food's in the dish, but they scare the living shit out of the cats -- both stray and otherwise -- in the process. 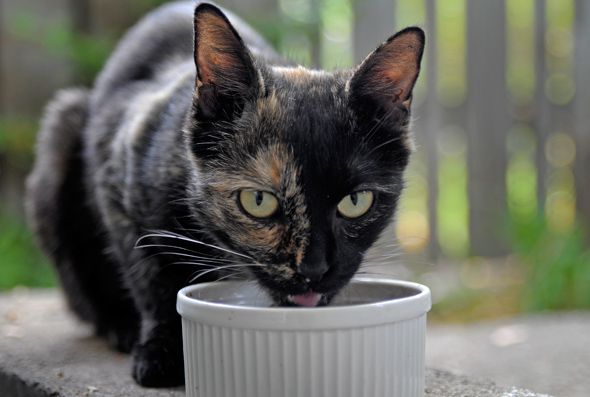 But beyond the raccoons, the problem with leaving out food is that it can attract loads of other strays. I naively thought that there were only the two that we'd regularly seen in the area, but since the initial sightings, at least seven others have made an appearance in our backyard.

This presents a number of problems. Having two outdoor cats, one of whom is particularly aggressive, the increased interaction with strays got me worried about fights and the subsequent vet bills. Then there's the cost of the food itself. Given that it's difficult -- both ethically/emotionally and pragmatically -- to feed just one or two, we found ourselves going through food at an alarming rate.

So what to do? Well, to avoid dragging this little narrative out beyond the point of interest, here's are some options. First, we started doing research, which was better late than never, I suppose. Calls were made to the Annex Animal Hospital (our local vet), the Toronto Cat Rescue and the Annex Cat Rescue. Visits were made to Toronto's lost pet listings. Through so doing, we decided that because one of the initial strays that we encountered was very friendly, we could bring it into our home so as to arrange for it to be neuter/spayed.

With the feral/stray population what it is, this is action that the various rescue agencies recommend concerned citizens take. The life of these cats is pretty brutal, especially in the winter, and reducing the possibility of breeding is a humane act. Although the TCR, who we ended up dealing with, can't help with trapping strays, should one be able to do so, they will guide him or her through the process of sterilization and potential adoption. 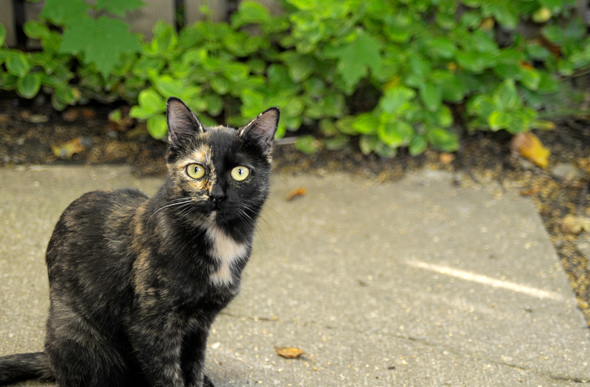 The little black cat in the lead photo has recently been returned to us after being spayed by a vet recommended by the TCR, and we're now actively looking to find her a home. The cost of doing this was about $260, but only because we hope someone will adopt her as a pet and thus paid for additional services. Included in these costs was the operation, a few days of boarding at the Birch-Dan Animal Hospital, a variety of vaccines, de-worming, the application of flee medication, a test for FIV and Leukemia and a microchip scan just to make sure that this wasn't someone's lost pet. If one is planning to trap/spay-neuter/release, it costs about half that.

Although this doesn't help with the other cats, they have yet to prove friendly enough to attempt such a thing. The tortoise shell cat (also depicted) has steadily warmed up and may prove a candidate for this as well, but that's where we've decided to draw the line. You can't help them all find homes, after all, and the effort already invested in this situation has been considerable.

To manage the increase in stray visits to our yard, we only put out a limited amount of food and fresh water in the morning and resist being too accommodating with new arrivals. This isn't always easy to do, but insofar as it's not currently feasible to trap and spay/neuter them much less find them homes, it seems like the best course of action. There's much debate about whether or not it's a good idea to feed ferals/strays in general, but given that we've started, stopping outright doesn't seem to make much sense.

We've learned the hard way with the stray cats in our neighbourhood, so I post this in the hopes that it might be at least a little helpful to others facing similar situations as the weather gets progressively colder.

Here is a collection of informative links I've consulted over the last couple of weeks.