As the end of the Dufferin Jog nears, questions remain about future construction

Construction on the underpass that will eliminate the Dufferin Jog is nearly complete. But, as the projected mid-November opening nears, questions remain as to whether the area around Queen and Dufferin will be subjected to another round of street-level construction involving the expansion of the railway lines atop the underpass.

The uncertainty revolves around two key issues: the level of traffic on the GO Transit-operated Georgetown South corridor and the future possibility that these lines will be run with electric locomotives.

Metrolinx will commence construction on the addition of three new rail lines shortly after the City of Toronto's construction on the underpass is complete. This is in keeping with their original request to widen the bridge over Queen Street as part of the City's plans to eliminate the jog. A 2009 Environmental Assessment report for the Georgetown South corridor, however, led them to conclude that "a fourth track would eventually be needed when proposed increased train service on both the Milton and the Barrie corridors are fully in operation." 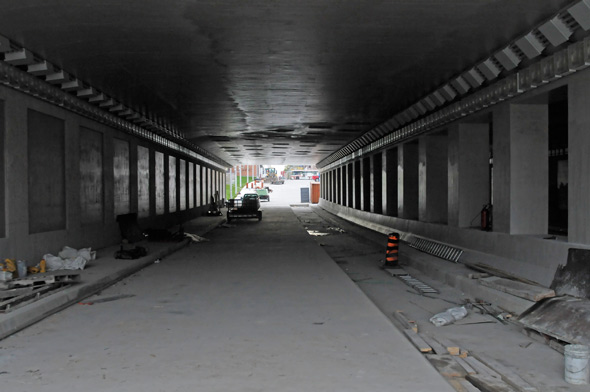 According to Metrolinx, they thus approached "the City to accommodate an additional bridge required to support a fourth track, in order to take advantage of the current closure of Dufferin Street." But given that this would extend construction on a project that's already caused significant disruption for the area in question, the City made the decision to go ahead with the opening of the underpass in the absence of the 10 metre addition needed to accommodate the fourth track. In the wake of this, Metrolinx has decided to push the additional widening back to a future date, "when train service warrants it."

Here's where it gets interesting. In an update on his campaign website, Kevin Beaulieu, who's running for Ward 18 council, makes the claim that "this expansion would not be necessary if the line were to be electrified."

Residents along this corridor have campaigned for electrification of the line due to concerns over the health threats posed by running what might be as many as 400 diesel trains a day through the area. Metrolinx, for their part, is in the midst of an electrification implementation study of all seven GO Transit corridors, but has yet to put forward any concrete plans to phase out diesel technology. 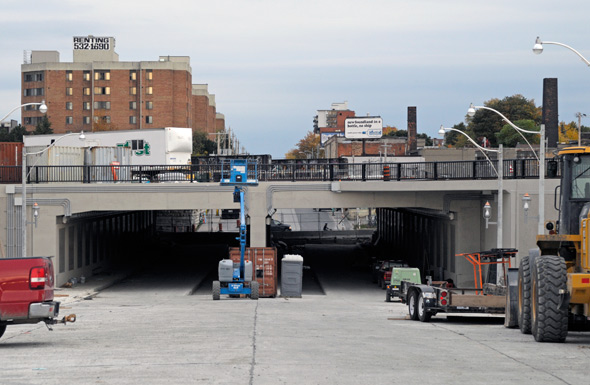 I got in touch with Beaulieu to see if he'd be willing to expand on the statement made on his website, which he did. "Electric locomotives are more powerful than diesel-electric ones used by GO and are capable of better acceleration and braking. Electric multiple unit trains, where every axle is powered (like a subway) are even more efficient but would require GO to replace all of its cars so it won't happen in the short term. The improved performance allows trains to run closer together and serve more stops, thus carrying more people to and from more places on the same number of tracks," he explained in an email.

This was the first that I'd heard of such a theory, so I followed up with Metrolinx to get their take on it. Not surprisingly, they disagreed. "Expansion of the Georgetown underpass and adding more sets of track alongside the existing track are required to accommodate future increasing passenger volumes, regardless of future technology," they replied. 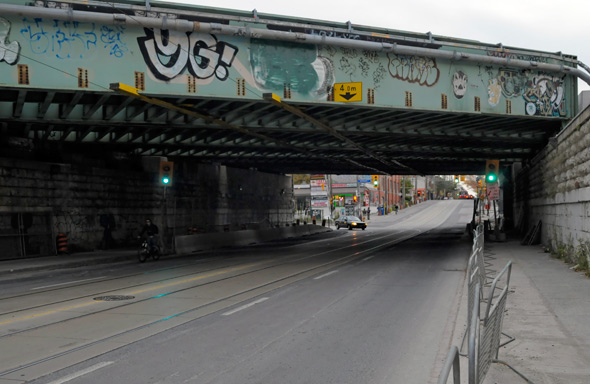 The main issue, they claim, is that the "fourth track will be required to accommodate all-day, two-way service to Barrie, when there is sufficient passenger demand. The time savings associated with using electric vehicle technology will not solve the future need for two dedicated tracks to the Newmarket subdivision to allow for trains to move in opposing directions at this location."

But, Beaulieu correctly points out that "the Georgetown rail corridor project is further complicated by Metrolinx deciding to operate the express airport service separately from GO - which means it will require its own dedicated tracks."

Obviously the 2009 Environmental Assessment has led to the change of heart, but one wonders if the potential benefits of electrification are being given short-shrift here. To speculate for a moment, it seems like a study of the potential benefits of a combination of electrification and line consolidation (i.e. using GO for the airport express service) makes some sense.

To their credit, Metrolinx has adopted a wait-and-see approach on the addition of a fourth set of tracks at the Queen and Dufferin bridge. But, if the increased service required on the Georgetown South corridor is still years away, perhaps the last EA needs to be re-interpreted in the context of new electric technology, which Metrolinx has already hinted could be on the way in the next 15 years?