A survey of Toronto election signs

I've always been blown away by the phenomenon that is campaign lawn signs -- neighbours boasting about who they are going to vote for and teams of candidate volunteers eagerly going door-to-door to place as many signs as possible. In the case of Toronto, where there are a multitude of mixed unit homes, it isn't uncommon to see a lawn with two or three signs for different candidates. For those of us who know who the candidates are and what they stand for, it often creates an impression of our neighbours based on who they are voting for, whether it be on the level of mayor or councillor. Far too often, however, these signs are boring. Corrugated plastic, poly-bags on metal posts or even good old cardboard sprinkled with names and muted colours that add little enjoyment to one's day, and frankly, little insight into the candidates themselves.

While the City of Toronto has many regulations surrounding the placement, removal and disposal of campaign signs, there seem to be no rules surrounding their capability at enticing interest. For most politicians, the goal of these campaign signs is simply to spread the word, to make their name noticeable and to get people interested in the election and going to their website to learn more.

For everyone else, myself included, the signs act as a way of deciding neighbourhood popularity and adding some thought to my fall walks through the city. But what are some of the different types of signs that include more than just a name? 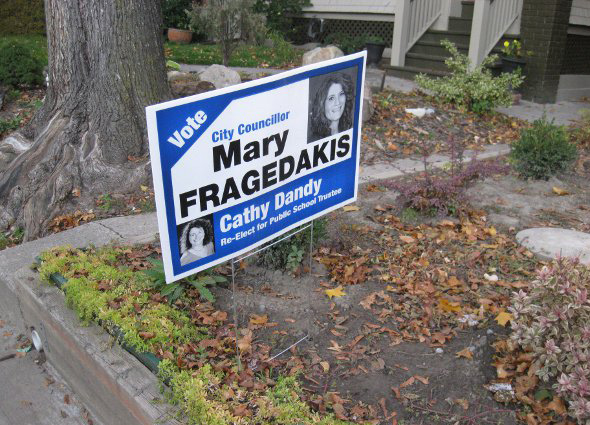 :
The majority of lawn signs simply state "vote so-and-so for ward blah-blah" followed by their website, if they have one. There are those that include pictures, but only when the sign is big enough, and there are also those that may include who the candidate is endorsing for TDSB Trustee. This is kind of a two-in-one advertising strategy that no doubt saves money from your potential councillors' budget and helps to set the signs apart, albeit ever so slightly.

Slogans make the word go 'round:
Sometimes a little extra umph is necessary to set someone apart from all the other names on people's lawns. A slogan helps to do this, as long as it's done well. Slogans are something that advertising companies spend millions of dollars researching and perfecting, but politicians stick to what they know. For example:

Ward 18 - Ana Bailao "Committed to our Community"
Ward 19 - Sean McCormick says "Vote for Change"
Ward 19 - Karen Sun playing off her name with "For a brighter Toronto"
Ward 22 - Josh Matlow is "Your community advocate"
Ward 17 - Jonah "Schein for change" whose lawn sign also boasts a check mark with a landscape image. 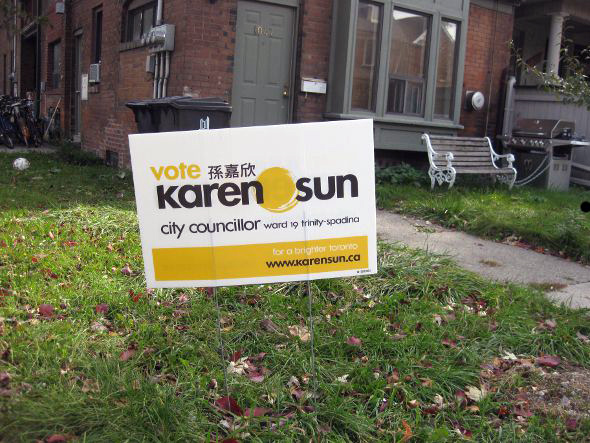 Attack ads:
An election isn't an election without ads attacking other candidates. One doesn't generally see this kind of thing on the councillor level, but I've certainly been listening to mayoral candidates bash other candidates on live debate, in the newspaper, and now on the internet and radio. However, some brazen individual, whether it was someone on a a rival mayoral candidate's team or someone acting alone, posted some signs along University Ave. bearing the logo "Wife-beating racist for Mayor!" And Adam Vaughan also suffered some sign theft earlier in the week.

Campaigns my mother wouldn't approve of:
There's not much to say about this one. While it isn't a lawn sign and I haven't seen them around much, this printable poster is available for download from councillor candidate Joel Dick's website.

It's actually rather clever, as he's running in ward 27, which is home to Toronto's Church-Wellesley Village, and it's suggested use is as a t-shirt. T-Shirt time anyone? In other T-shirt news, Rob Ford announced his own t-shirt line is now available for purchase. 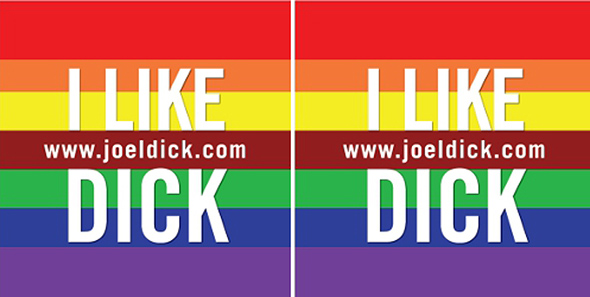 Cute advertising ideas:
Candidates in Ward 15, Eglinton-Lawrence have the right idea behind their campaigns. Josh Colle's motto "imagine Toronto" and campaign lawn sign with the city skyline gets people thinking about what kind of city they want. But to make his campaign a little more exciting for the younger ones, he has a downloadable colouring sheet.

Before the election even began in earnest, Rob Davis started handing out mock parking tickets to residents in Ward 15 as a statement about the Motor Vehicle Registration Tax that he is vowing to get rid of if elected to council. That's got to take the creativity prize.

Well, that's just a brief overview. Without a doubt there are dozens more candidates that find ways to make their campaign stand out from the multitudes of signs that pop up in neighbourhoods around the city. Have you seen any that you'd deem noteworthy?

Writing and photographs by Nicole McIsaac.