The defining moments in the first phase of Toronto's mayoral race

As Toronto's mayoral election enters the final post-Labour Day phase, I find myself looking back at the long campaign. There have been entertaining moments (e.g. the antics of Kevin Clarke), serious ones (e.g. debates about the future of transit), and disappointing ones (e.g. the failure of a single candidate to capture the imagination of a broad sector of the city).

But through the daily grind, four major events stand out, events which will likely be remembered as the game changers of Toronto's 2010 election. They are: David Miller's announcement last September that he wouldn't seek re-election, John Tory's (first) decision not to run, Adam Giambrone's fall from grace, and the rise of Rob Ford.

Each altered the race and challenged people's assumptions. In the case of Ford's rise, I was reminded reminded of a conservative element in this city that I sometimes forget about. All of them, however, were surprises and a reminder that anything can happen in politics, something worth taking into account as election day draws near. 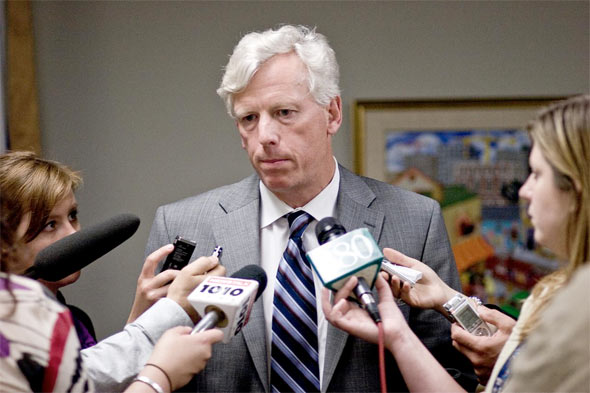 Miller always said he would he would run again. As late as mid-September 2009, he met with his closest advisers, including John Laschinger (his 2003 and 2006 campaign manager), to plan his re-election. Miller's supporters were ready for a tough campaign and optimistic about his prospects.

Then on September 25 came the first bombshell of the election...

"I'm announcing this morning that I will not be seeking a third term as mayor," Miller said, with his family standing behind him, to a surprised crowd outside his office at City Hall. (Video)

Miller had reconsidered his decision. The official reason was that he wanted to spend more time at home, and that he felt a re-election campaign would be focused on him more than the city. But some speculated that falling poll numbers, caused by that summer's garbage strike and new taxes, were the real reason he chose to retire from politics.

The lack of an incumbent meant that the race for mayor was wide open, and it allowed two outsiders from city hall, George Smitherman and Tory, to take the stage. Articles were published daily by the major papers about the two would-be mayors between the months of October and December.

In November, Royson James of the Star proclaimed: "Six months from now, the race for mayor of Toronto will be a contest between George Smitherman and John Tory, straight up." Released early November, an Angus Reid poll seemed to confirm this predication. It said Tory led with 46 percent, Smitherman stood at 21, Giambrone at 14, and Mammoliti at 1.

The first poll got the campaign rolling. On November 8, Smitherman quit his provincial cabinet post and officially declared his candidacy. Several others, such as Councilor Karen Stintz and Glenn Murray, who'd both been mulling a run for mayor backed out. And on December 14, Rocco Rossi, Tory's campaign manager in 2003, jumped into the race.

What we didn't know at the time was that as Tory vacationed with his family in Florida during the holidays, he had doubts about throwing himself into the race. Sure he was the unofficial front-runner, but maintaining a lead in a long campaign is a difficult task.

Everyone expected Tory to run. Even as late as January 4, Marcus Gee of the Globe and Mail wrote that "nothing can stop him." People had been talking about his candidacy for months. "Surely he couldn't disappoint everyone," was the common sentiment. 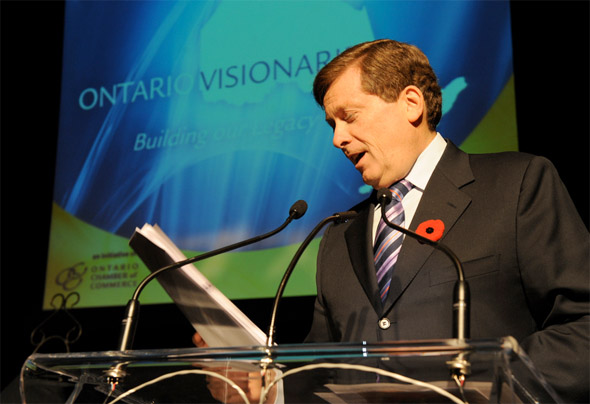 But on January 7, Tory announced that he wouldn't run, explaining that he preferred to join the board of the Toronto City Summit Alliance and spend more time with his family. Also, having lost three important elections in his career, the prospect of losing a fourth must have been a factor in his decision.

Tory's bombshell, like Miller's in September, reconfigured the race. On January 14, Smitherman was catapulted into the lead, to 44 percent, by a new Vision Critical poll. In first place and with his biggest competitor out of the race, Smitherman relaxed and let his campaign keep a low-profile until May (possibly a reason behind Ford's quick rise).

Earlier, while talk centered on Smitherman and Tory, Giambrone was building his campaign, gathering union support, and gaining popular exposure. He made the news when NOW magazine mistakenly called him gay in January, and he received attention (though a lot of it bad) after releasing a satirical YouTube video in the same month.

Giambrone caught the press's interest when Laschinger signed on as his campaign manager. This together with his youth appeal quickly made him the left's best chance in the 2010 election.

On February 1, to the music of K'naan and the Black Eyed Peas, Giambrone announced his mayoral bid at Revival nightclub on College St. Many teenage supporters attended. Katie Daubs for the Star wrote that they were "screaming as if it were teen music heartthrob Justin Bieber throwing his hat into the mayoral race." 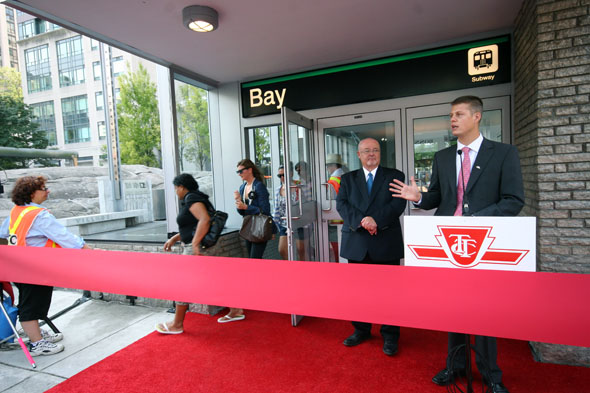 However, the party came to an end a week later, when it was revealed that Giambrone had been having a sexual relationship with university student Kristin Lucas. She was hurt after learning that Sarah McQuarrie was his live-in girlfriend--Giambrone had told her he was living with his brother. And as a form of revenge, Lucas took her story to the Star.

Initially Giambone lied and claimed the relationship only consisted of text messages, but on February 9 he admitted he'd been sexually involved with Lucas and other women. At first, he was supposed to stay in the race regardless, but Giambrone pulled the plug on his campaign on February 10.

"There are weeks that change your life and this one has certainly changed mine," he said at a quickly organized and painful press conference. He apologized to his girlfriend, supporters, and family. Then after having restrained himself so far, Giambrone broke down and ran out of the room without finishing his speech.

Kevin Beaulieu, his executive assistant and current candidate for Ward 18, had to finish it. "His mayoralty campaign ends today," he read. And with that Giambrone's political career in Toronto was finished. As far as the mayoral race was concerned, his departure meant Laschinger threw his weight behind Pantalone, now the sole left-wing candidate.

The rest of the winter was dominated by the question: Where's Smitherman? For months nearly nothing could be seen of him except his face on the cover of Toronto Life's March issue (who ran a very interesting profile of the former MPP). Smitherman's website remained temporary, he ignored calls from journalists, and made nearly no policy announcements.

The strategy changed after Jeff Bangs' surprise resignation as campaign manager in mid-April and his replacement with Bruce Davis. In the days following his appointment, Davis proclaimed it was time to "unleash George." Smitherman did eventually come out of his shell when he made his first major policy announcement, called Signature Parks, in May.

But little did we know a dormant volcano was rumbling during the winter months. Rob Ford's chances were considered slim by many, including the Globe and Mail's Gee, and he was out of the media spotlight throughout much of the early campaign. It was only on February 1 that Ford managed to grab some attention when he released a poll he'd personally commissioned that put him in third place. 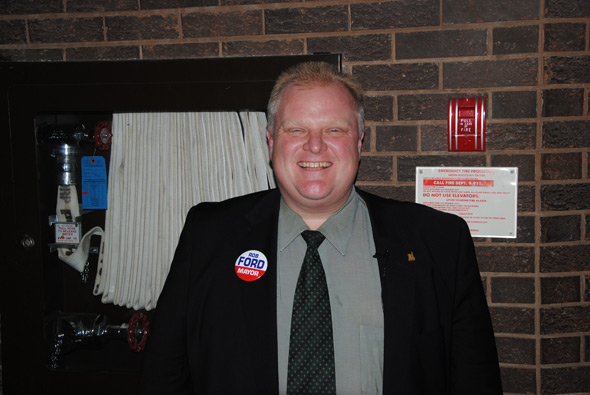 A few weeks later, on March 26, Ford received a "rock star welcome" at his campaign launch at the Toronto Congress Centre. Royson James said it was "the most raucous, jubilant, enthusiastic campaign launch of the 2010 Toronto mayoralty race."

For several weeks Ford hammered his message away: end wasteful spending, cut council to 22 members, and eliminate the land transfer and vehicle registration taxes. By mid-June, his efforts paid off better than most imagined, a poll put Ford into first place, sending shock waves through Toronto.

In the summer months that followed, Tory's name resurfaced twice as a possible candidate, the first time at the end of May and early June, then again at the end of July. Each time he let rumors percolate before crushing them, disappointing large numbers of his supporters.

Also, the first candidate to enter the race was the first mainstream candidate to leave. Giorgio Mammoliti called it quits on July 5, and suggested his seat at debates be given to Rocco Achampong. Both Rossi and Pantalone thereafter endorsed Mammoliti's council bid for Ward 7.

The summer was bumpy for Ford. The Star published a story on July 13, claiming he was asked to stop coaching football at Newtonbrook Secondary School in North York in 2001 after an altercation with a player. The article led to Ford's decision to cut off the Star and sue them for libel. On August 4, the press also pounced when it was revealed that Ford endorsed a local council candidate who opposed homosexuality.

The summer's biggest surprise, however, was the fact that a series of back-to-back scandals (controversial statements about immigration during a CP24 debate, revelations of a 1999 marijuana possession charge, and accusations by the city integrity commissioner that he abused his council position to raise funds for a private charity) didn't derail the Ford campaign. By the end of August he was still leading the race at 42 percentage points.

So now we're entering the final and most intense phase of the campaign with Ford as the frontrunner, Smitherman placing a strong second, with Rossi making a comeback, and with Thomson and Pantalone trailing.

But after four big surprises, I wouldn't make too much of the polls until we get closer to election day. It's always possible a fifth surprise can occur before October 25. So don't place your bets on the next mayor just yet. 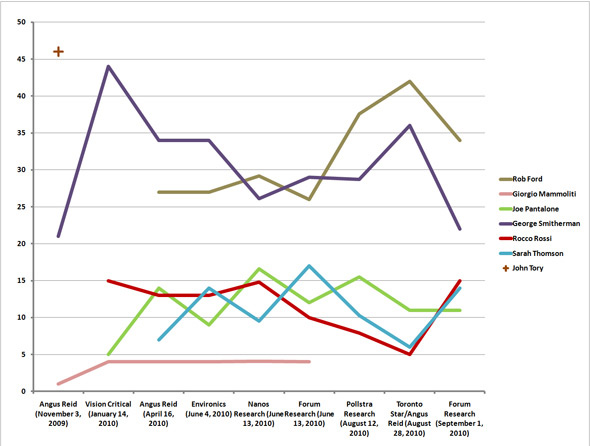 Photos: David Miller by danepstien, John Tory via the Ontario Chamber of Commerce. Other images and photos by Tomasz Bugajski/blogTO.