The plan calls for nine kilometers of physically separated bike lanes on Richmond, Adelaide, and University Avenue. It also includes a pledge to finish the downtown portion of the Bike Plan by 2012, add sharrows and bike boxes on all arterial roads, and cap the speed limit in Toronto at 50km/h (except on expressways). However, limiting suburban bike lanes where community support doesn't exist is also part of the plan. 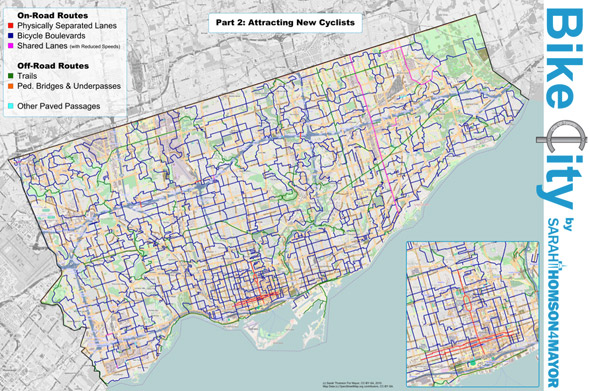 Other initiatives include creating 1000 km of on-road bike routes, 40 km of off-road bike paths through utility corridors, and building underpasses, crossings, and bridges for cyclists at obstacles like major highways and rail lines. The plan also consists of a number of other proposals such as cracking down on cyclists illegally riding on sidewalks, which is welcome news to countless pedestrians who are put in danger by the practice.

Bike City would be financed by the existing $101 million earmarked by city council for the city's official Bike Plan. Thomson says that she would streamline its implementation by having a vote upfront for a four-year plan, with the hope of eliminating political interference thereafter.

The plan is by far the most comprehensive bike policy any mayoral candidate has offered to date. It includes a number of good ideas, especially bike boxes, which allow cyclists to make safe left turns without having to cut through traffic. And the promise to complete the Bike Plan's downtown network, proposed nearly 10 years ago, is in itself a step forward, considering the opposition to new bike lanes among the candidates.

However, questions remain over the feasibility -- and, perhaphs more importantly, the desirability -- of keeping city speed limits capped at 50km/h. The question of how physically separated bike lanes on Richmond and Adelaide would accommodate currently existing driveways is also unresolved. 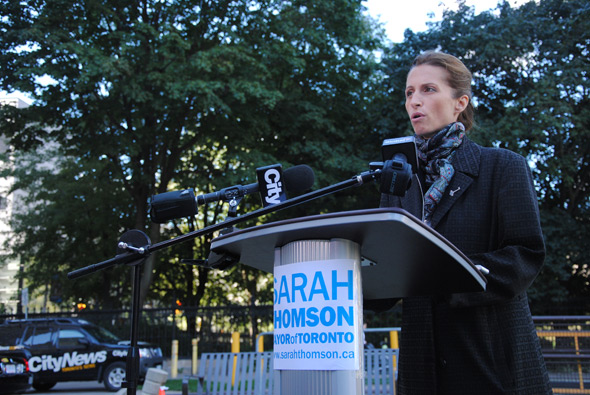 Bike City is a great way for Thomson to endear herself with the progressive population of Toronto. And revealed on the last day to drop out of the mayoral race, the proposed plan is a sign that she'll stay in the election for now despite disappointing poll numbers.

Cyclists and bike advocates should be happy a comprehensive bike plan has entered the debate, but room for enthusiasm is limited by the fact that it's been proposed by a candidate who's unlikely to win and the fact that it's short on specifics. The natural question becomes, even if Thomson is elected, will it be possible to make good on these promises?

More likely for implementation is a Rob Ford or George Smitherman "bike plan," which involves no new bike lanes downtown. Both candidates are trying hard -- desperately, in Smitherman's case -- to win the votes of suburban drivers. 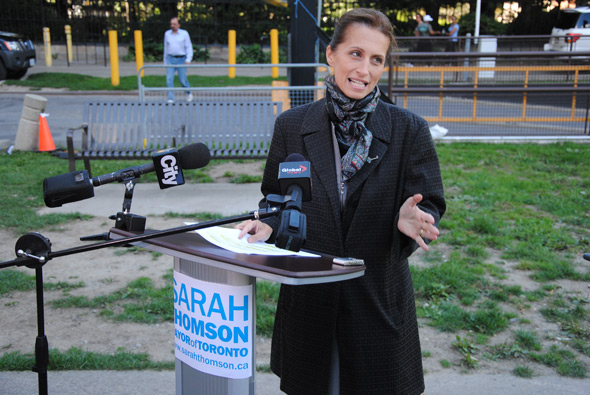 The biggest problem for cyclists is that most drivers ignore the fact that bikes are here to stay and that there's no choice but to share the road with them. In my case, I actually prefer to drive on a road with a bike lane because I know it's safer for me and the cyclist -- I don't understand why others don't appreciate this.

Tensions between bikers and drivers will likely stay around until we get serious about addressing the way we approach transportation. But despite the environmental and traffic concerns driving poses, more and more cars seem to be flooding Toronto's streets.

A full rundown of Bike City can be found here. And a larger map of Thomson's bike lane network (depicted above) can be viewed here.