On a hot Wednesday afternoon in an even hotter auditorium at Ryerson University, Toronto's top five mayoral candidates discussed the seemingly not-so-hot topic of senior citizens. The debate was hosted by CARP, a non-partisan advocacy group for those over 45.

Seniors' issues have taken a back seat so far in this campaign--compared to the relatively hot topics of transit and bike lanes--and they might seem like something of interest only to an older crowd.

But that's far from the case. As Toronto's baby boomer generation ages, young people will be increasingly responsible for taking care of them. The strain on social services will be a big challenge for all levels of government and taxpayers.

And not only are seniors a major public policy concern today, they're also an important political concern for the candidates. People over 45 are the most likely demographic to vote. 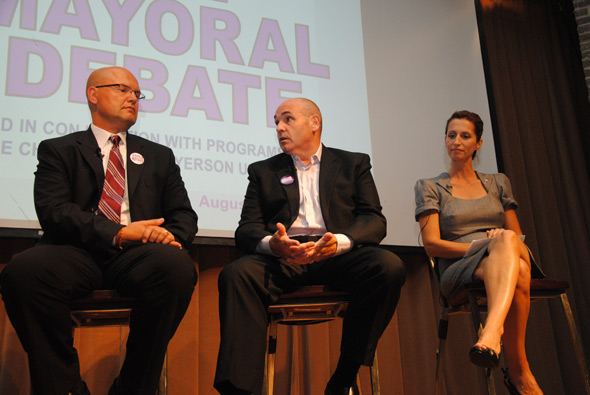 The debate's first segment was introduced by former mayor David Crombie in a pre-recorded video. The question: how are you going to help seniors?

George Smitherman proudly touted his plan to allow seniors free access to the TTC between 10 a.m. and 2 p.m. and reminded the audience of his involvement with Ontario's Aging at Home Strategy as Ontario Health Minister.

Rob Ford used his mother as an example. "She comes up to me and says: Son, I cannot afford to live in this city," Ford said. "She says: what's going on here? I'm a senior; I'm on a fixed income, [and city councillors] are living the high life at my expense."

"The gravy train has to come to an end and seniors need to come first," he added.

Joe Pantalone promoted his recently announced plan to freeze property taxes for seniors earning $50,000 per year or less, and complained about the lack of federal government support for social services.

Rocco Rossi spoke about the need for senior's homes to be more culturally sensitive to issues of language and diet, and Sarah Thomson about retro-fitting senior's homes.

Smitherman was the first to go on attack. "Councillor Pantalone speaks about the federal and provincial levels of government, but if we look at their circumstances we can obviously see their ability to drop serious dough into the outreached hands of Torontonians is going to be very challenging."

Then he went after Ford. "What worries me is that as councillor he voted to eliminate snow clearing of sidewalks, which is something very important to seniors, and he's been working aggressively against the 311 service, which seniors more than anyone else are relying upon."

Ford defended himself, explaining that the snow removal vote only affected dead-end streets.

But then Smitherman whipped out his notes and read from the actual council motion. "Councillor Ford moves that the item be amended by...eliminating city-wide sidewalk snow removal for savings of $13,414,000"

"The good news is that the vote was defeated 34-8. It certainly wasn't the way [Ford] described it just now," he added. 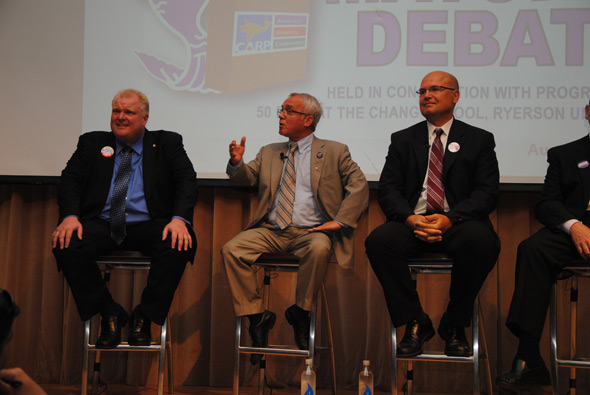 Later in the debate a surprise video by John Tory was played. "Are you ready to step up and be the kind of mayor that gives us streamlined government, that gives us humane government, and that's going to give us civilized debate at city hall?" he asked the candidates.

The strange thing was that they never had a chance to answer, moderator Susan Eng simply moved to the next question when the video finished.

Eng also abruptly interrupted Pantalone while he was speaking about provincial downloading. "You know what? That's not going to help us to blame the provincial government. Tell us what you're going to do at city hall," she said.

CARP conducted a poll after the debate that revealed Smitherman was the clear winner. 18 per cent of the audience said they would vote for him prior to debate, but that number jumped to 43 per cent afterwards.

Rossi also made some inroads with the crowd, jumping from 17 per cent to 23. The rest of the candidates failed to make any improvements.

At the end of the forum the candidates were encouraged to sign a pledge to make Toronto an age friendly city. They all signed except Ford. CP24 reports he said he couldn't commit to the pledge without knowing what it costs. 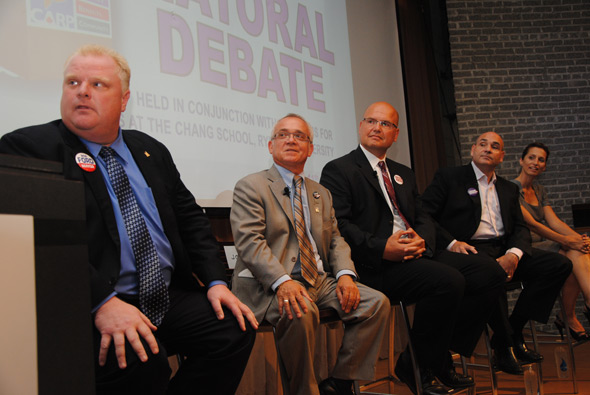 The debate's problem was Eng's tendency to ask multiple questions at once--at least three at time. This didn't force anyone to stay on topic and made it easy to offer general answers. At one point Eng packed five questions into one. She asked:

"How will we see an end to everlasting road construction? How will you get the budget under control and keep taxes as low as possible? What would you do to govern the city better? How would you make sure that debate at city hall would be civilized? And by the way, what do you think about term limits?"

However, relative to the slug-fest-one-liner CP24 debates we've seen recently, the CARP debate was lively and engaging.

And despite the obvious resonance Smitherman had with the crowd, the forum also showed Ford's talent for presenting a concise message. While the rest of the candidates squirmed to offer proposals to help the aged, Ford railed against excessive city spending.

This might not help seniors, but the clear (and singular) message he consistently brings to debates is what he's pinned his election hopes on.