The Perseid meteor shower arrived as promised early this morning, offering around 15-20 shooting stars per hour for those who escaped the city's light pollution. Although this number was lower than the 60+ that some expected, GTA dwellers who didn't put that much distance between themselves and the downtown core still reported moderate meteoric activity on the outskirts of densely populated areas. (Stargazers elsewhere in the world were even more lucky).

For those who couldn't stay up on weeknight to see the show, there should be some residual activity tonight as the Earth passes through the remaining debris of the comet Swift-Tuttle's debris field. But, given that the major activity has passed, it'd probably be wise to avoid any dedicated stargazing trips. If there's some other reason for you to be out in a dark place during the wee hours tonight -- off to the cottage for the weekend, perhaps? -- then looking in a northeasterly direction for extended periods of time might be worth the energy. 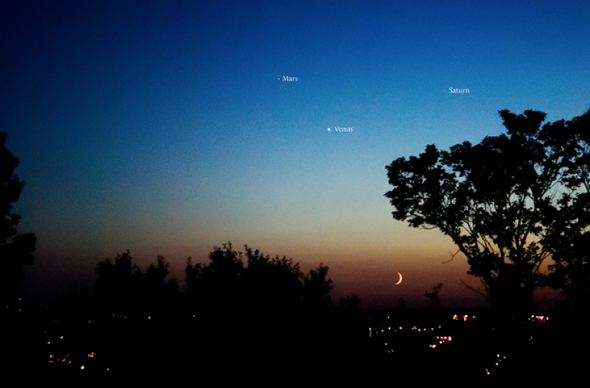 In any case, tonight will offer another opportunity to see the other celestial phenomenon taking place the last few days. As happened last night, there will be another planetary conjunction at sunset.

I know I've been playing the resident space geek here for the last little bit, but even those who have little interest in travelling to see shooting stars or northern lights might like to have a quick glimpse at the western horizon to see this little coincidence.