The Perseid meteor shower is set to light up the night sky around the GTA (and far beyond). Reaching its peak in the early morning of August 13, the annual event may just offer a celestial show to make up for what many hoped the northern lights would provide last week. So long as the skies are clear on the night in question, the chances of a spectacular display are quite high. Astronomers estimate that 60 or more meteors could be visible each hour following sunset on the 12th.

In fact, those wanting to get a jump on their stargazing can start as early as tonight. The Earth's orbit has already entered the outer debris field of the comet, which means that shooting stars should be visible for those who exercise some patience and who live far from major sources of light pollution. Unlike my disappointing aurora borealis chasing, I was lucky enough to see five Perseids last night despite the fact that I hadn't specifically gone looking for them.

But before that generates false excitement, I should qualify this by noting that I was far from the city and its concomitant light pollution. Still, one thing last night's viewing session underscored is the degree to which it's important to zone out on the area of the sky from which the meteors originate. Finding a a vantage point from which you can gaze northeast for extended periods of time will certainly pay dividends as long as you've managed to remove yourself from the worst of the city's lights. 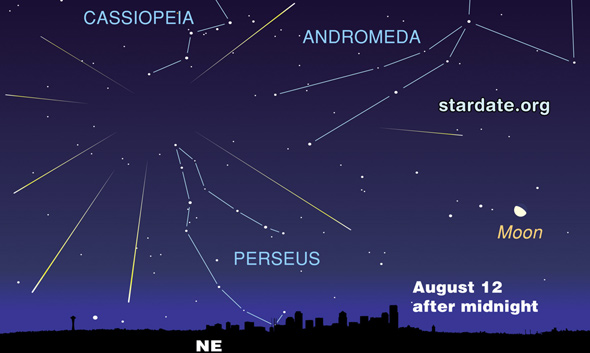 It's the usual drill as far as maximizing the viewing experience goes. Getting north will dramatically increase your chances of seeing multiple meteors. But, unlike the northern lights, which generally appear only at high latitudes, the Perseid meteor shower is visible throughout the entire northern hemisphere (my viewing last night took place from South Carolina). So short trips north of the city would be best, but getting up on top of an apartment building or condo on the north end of the city should also do the trick (if yield less dramatic results).

The Perseid meteor shower is the result of the comet Swift-Tuttle, which passes relatively close to Earth every 133-135 years. In fact, there's some speculation that the comet could ultimately strike our planet in the distant future (we're talking the year 4479 here...). For now, however, our orbit is merely passing through junk that the comet left when passing by our solar system long ago.

If you're not able to stay up late for the meteors, there's something of a consolation prize. Looking west at sunset will reveal a planetary conjunction featuring Venus, Mars and Saturn (along with a crescent moon).

So, as is always the case with these celestial events, let's hope the weather cooperates.