Hallam Street is the latest to get sharrows

Back in May, the City announced a plan to increase the number of sharrows on Toronto streets. At the time, I was skeptical about the streets that had been selected for such treatment and the overall effectiveness of these pseudo bike lanes. But after noticing their installation on Hallam Street the other day, I think I might be coming around.

Here's what I had to say when the plan was announced: "It's nice to throw cyclists a bone by painting sharrows on these streets [Hallam and Lappin], but they don't see enough traffic to make the whole exercise worthwhile. Like outfitting the class nerd with a box of condoms on prom night, the safety-first stance is a nice thought, but almost surely unnecessary."

Well, after a summer spent using Hallam as low-traffic route to head west from my apartment, I'm ready to back off this stance. In fact, I'm starting to think that low to mid traffic-flow streets are actually ideal candidates for the addition of sharrows. Although most rides along such streets are uneventful (in a good way), drivers and cyclists alike tend to do some pretty unpredictable things. And while sharrows won't separate vehicle and rider, the awareness they foster might just be enough to make these lower use streets safer (I still maintain that sharrows leave much to be desired on highly trafficked routes). 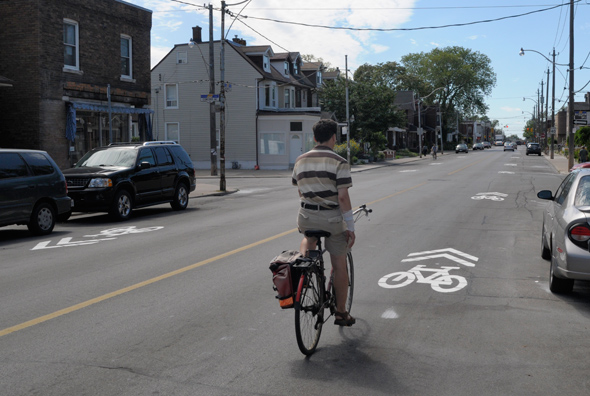 Throughout July, when I was riding more frequently and before the sharrows were painted on Hallam, I experienced a startling number of mini-incidents on the street (right side cut-offs, parked car doors opened in my path at the last minute, etc.). And while I doubt that such things will be eliminated all together, my casual (and admittedly brief) observations of the street post-sharrows is that it's a safer route to ride.

The freshly painted symbols are highly visible and tend to escape the fate of being blocked by delivery trucks and the like, which is a major problem on the stretch of College St. that features such markings (though these are, to be fair, meant to be rush hour sharrows).

One note should, however, be made to cyclists who ride on streets such as Hallam. Just as sharrows are designed to inform drivers that they must share the road, they also instruct cyclists to remain within the semi-designated area on the right hand side of the street. While staying too far to the right is asking to be doored, when cyclists drift out of the sharrows into passing vehicular traffic (in the absence of an obstacle that must be avoided), the effectiveness these road-sharing reminders is greatly diminished.

I'll need to spend some more time riding along Hallam to be sure that the sharrows are making a difference, but my early impression is that they're a good addition to a street that can be used as a "bridge" between the quieter side streets of the Annex and High Park and the portion of Dupont that has bike lanes (starting at Lansdowne to the east and the Junction in the west).