Rogers Communications has taken to Toronto sidewalks with their latest ad campaign for their internet and and HD cable services. Problem is, spray-chalking public space with corporate logos and slogans without the permission of the City is illegal.

It's also a pretty sleazy way to promote your products.

As I was driving north from Bloor last night, I noticed some serious stenciling going on at the northeast end of Christie Pits at Barton. I thought it was a bit ballsy -- being around 10:00 p.m. or so -- until my companion informed me that these were no Banksy wannabes. Sure enough, a closer look revealed that their "work" was a series of Rogers ads. 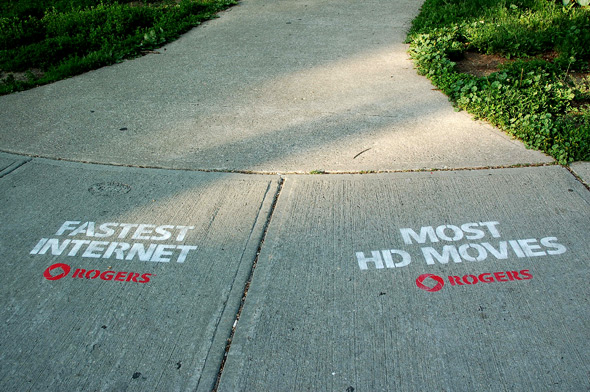 At first I thought that the company must have paid for the use of the sidewalk in the area on account of the fact that Rogers broadcasts Toronto Maple Leaf baseball games from that area of the park. But after further thought, I started to doubt this theory.

Initial confirmation that the campaign was in violation of Toronto by-laws came via Twitter. It seems I wasn't the only one who noticed the illegal ads going up. The ever-watchful Jonathan Goldsbie (@goldsbie) was quick to bring a similar infraction at Bathurst and Barton to the attention of Toronto 311 (@311Toronto), which precipitated a promise that a by-law officer would look into the infraction. Worthy of mention is how quick the response was to the original complaint (kudos @311Toronto).

But just to be sure that the advertising was illegal, I contacted Toronto Transportation Services, Right of Way Management. A quick conversation with Socrates Tzotzes, the by-law officer who investigated the sidewalk ads, revealed that Rogers has been ordered to remove all of the ads within 48 hours. In the event that they don't comply, the City will remove them at Rogers' expense.

I also contacted Rogers. Keith McArthur, Senior Director, Social Media and Digital Communications, offered this statement about the sidewalk ads: "Rogers is always looking for unique ways to tell Canadians about our innovative products and services. In this case, we crossed a line that we weren't aware of, and as soon as it was brought to our attention we halted the program and we are taking immediate action to remove the messages."

To be fair, Rogers isn't the first company to engage in this type of advertising. Maple Leaf Sports and Entertainment also ran into trouble with their Spirit is Everything sidewalk campaign last November.

But, it's also important to note -- particularly given McCarther's above statement -- that this isn't the first time that Rogers has used this advertising strategy either. Back in October of 2007, Spacing wrote about a similar campaign. These incidents would seem to suggest that Rogers' policy is to place the ads first, and worry about by-law compliance later.

Tzotzes informed me that Rogers has already started work on removing some of the stencils on sidewalks and walls in the Beaches, where a similar campaign took place last night. That's pretty quick -- particularly since the company could stretch it out for another day before being in violation of the City clean-up order -- but the whole strategy strikes me as counterproductive. My sense is that most people don't like to see sidewalks littered with advertising.

Or maybe I'm wrong. Perhaps, it's actually quite savvy. If the only repercussion is a take-down order, perhaps it's worth it for the couple of days that the ads are up. I guess it just depends on one's definition of "worth." Even if it catches a few eyes, it's a pretty bush league move on the part of a major company.