Last week, I stumbled across a then little known aspect of Toronto's history that sheds light on how the city came to be placed on the land upon which we now reside.

On the 9th of June, the Mississaugas of New Credit and their chief, Bryan LaForme, visited Toronto to meet with Mayor David Miller and City Council to celebrate a deal with the federal government to compensate the Mississaugas $145 million for the original sale of the land that is now Toronto, a deal which is often referred to as the Toronto Purchase.

Robert M. MacIntosh, the author of Earliest Toronto, notes that in 1783, following the American Revolution, an influx of United Empire Loyalists moved to British North America (what is now parts of Canada). Those who had sworn allegiance to the British monarch were persecuted by the revolutionaries and had their properties confiscated. They came north as political refugees. British North America, still a colony at that time, offered protection to those who wanted to escape the turmoil of the national uprising. Upwards of 40,000 people arrived in their new homes of Ontario, Quebec, Nova Scotia and New Brunswick. Lord Dorchester, the governor general at that time, was charged with the task of resettling the refugees.

Some of the settlers expressed disdain for the idea of life in Quebec as a minority under French civil law. As a result, the colonial government decided to resettle them further up the St. Lawrence River, in the direction of Cornwall and Kingston, while the Crown had to purchase additional land from the Natives.

According to G.T. deT. Glazebrook's The Story of Toronto, in the mid-eighteenth century, British officials established a precedent that followed two principles, which were supposed to guarantee the interests and rights of the Native populations. The British government recognized that Natives were legally entitled to the land, which they occupied or used for hunting, and that only the Crown was able to buy it from them (the price, however, remained an issue ...). 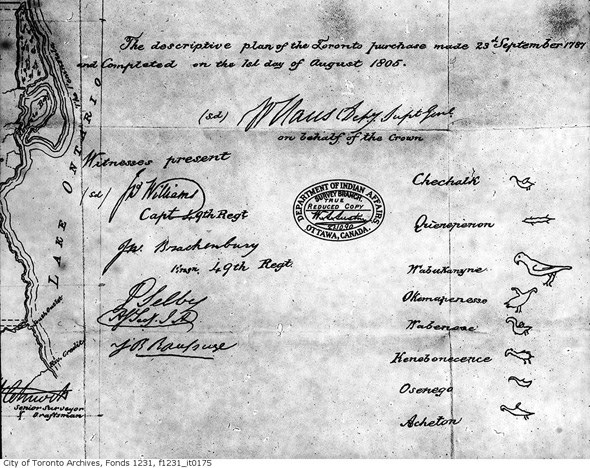 In 1786, Dorchester took a long and hard look at the map of southern Ontario and decided to acquire some land along the north shore of Lake Ontario, thinking that the harbour that he spotted would be a good location for a naval base and would at the same time be surrounded by enough land for the Loyalists, who could be settled there. A year later, he set up a meeting at the Bay of Quinte, between three Mississauga chefs and John Collins, his deputy surveyor-general, with regard to a purchase of an area of 250,880 acres.

The area extended eastwards from the mouth of the Etobicoke River for fourteen miles to the Rouge River, and northwards for twenty-eight miles, almost reaching Lake Simcoe. The settlement was signed between Collins and his colleagues, as well as three chefs, WabukĂ nne, Neace, and Pakquan. The price was just 10 shillings, roughly $60 in today's currency. Historians agree that the Mississauga weren't properly apprised of what they were agreeing to. It was later clarified that the land they sold stretched from Etobicoke Creek to Ashbridge's Bay and 45 kilometres north of the waterfront. Another piece of land in present day Mississauga was sold for the same amount.

The Toronto Purchase, as it came to be known, was signed in September of 1787. In July of the following year, Collins instructed Alexander Aitkin to survey the site of Toronto harbours, which was the first step in the founding of Toronto.

Today, the Mississaugas of New Credit live on small portion of the Six Nations of Grand River Reserve, where they moved after selling their land. Most of the money from the land sale will go into a community trust, but each of the adult members of the 1700 person community will receive $20,000. This land claim has been in process since 1986, and now Torontonians live on land that was (more) fairly purchased from the area's earlier inhabitants. 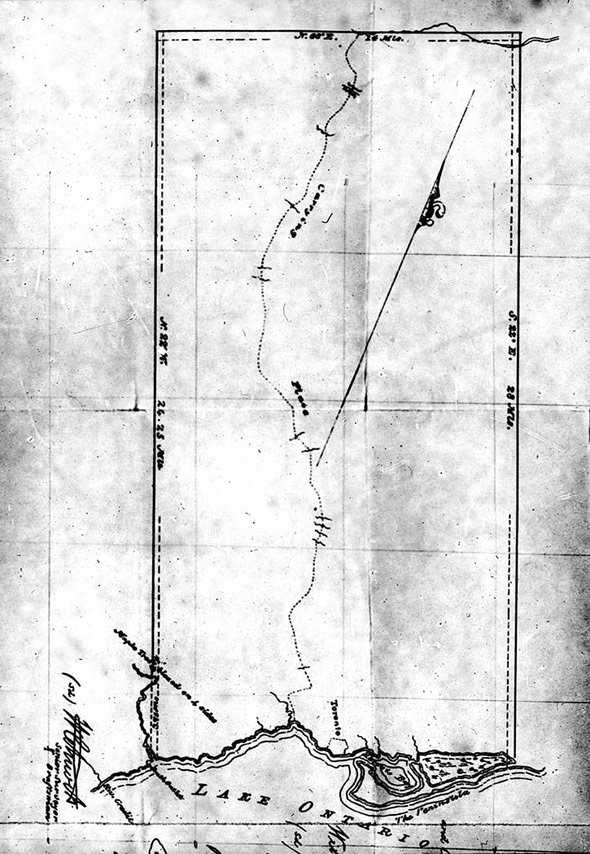