Activists and police faced off on Friday afternoon in the tensest and largest G20 protest to date. Thousands of marchers promoting everything from feminist issues to liberating Palestine snaked their way through Toronto's downtown streets under the watchful eye of police in riot gear.

Unlike Thursday's relatively calm rally by Native groups and their supporters, Friday's march had a chaotic atmosphere and at several points was on the edge of turning into a full blown riot.

The afternoon started as a peaceful gathering by women's and feminist groups at Allan Gardens but quickly descended into a confrontation with authorities. 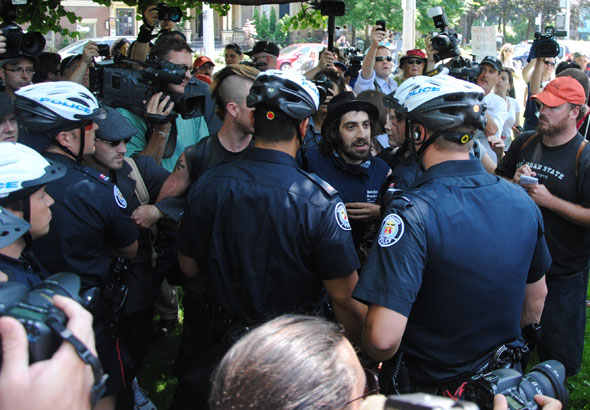 Fariah Chowdhury, an organizer with No One Is Illegal, began the march with a fiery speech strongly denouncing the police, G20, and security fence.

"How many of you are here today because you're pissed?" she screamed to the crowd. "We're angry because we don't need a few to make the decisions which impact the lives of the many," she yelled.

Then John Clarke, a leader with the Ontario Coalition Against Poverty added fuel to the fire, saying: "We're not looking for peace, they've given us war, and we're going to give them war back!" 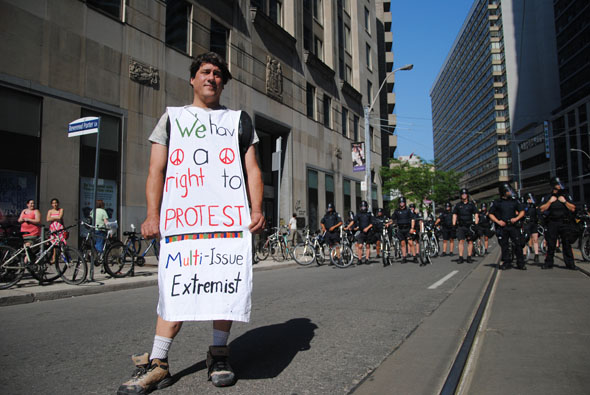 One of the tenser moments of the afternoon was at Yonge and College when, according to those at the scene, several people were arrested after getting into a dispute with police. Protesters shouting "No justice no peace, fuck the police" crowded the officers.

Then someone threw a glass bottle, leading officers to close their facemasks. But then, as quickly as the incident developed, everything was over and the march continued along College. At another hot moment, cops donning full riot gear intercepted activists trying to move south on Simcoe, and rumours started to spread that sound canons were being deployed. 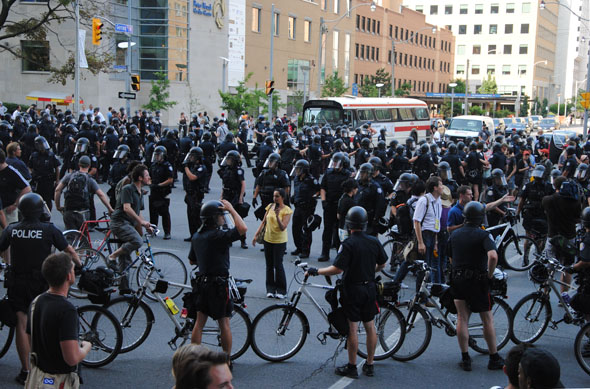 Surprisingly, large numbers of people were prepared. Ear plugs were abundant, and many started to brace themselves for the piercing sound; however, it all turned out to be a false alarm.

Despite some of the angry rhetoric, the protest also had an atmosphere of a party. Samba ElĂŠgua, a Toronto-based percussion group, played drums while marching to dancing protesters. At other times, vans blasting House of Pain - Jump Around gave the event a feel of a surreal street party. 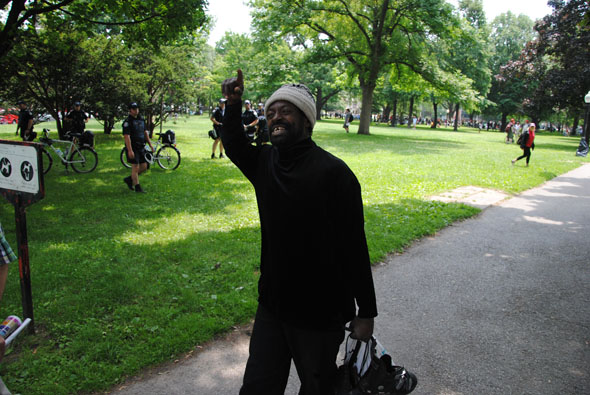 It was equally strange when Kevin Clarke, one of Toronto's fringe mayoral candidates, stopped by Allan Gardens to give some advice to activists. "Don't protest in the heart of downtown because you're falling into the hands of those who oppress," he told people gathered in the park, and then left after several minutes.

Overall, a serious confrontation was avoided during Friday's march, but it was only a warm up for what we are supposed to see on Saturday and Sunday. Brace yourself, Toronto. 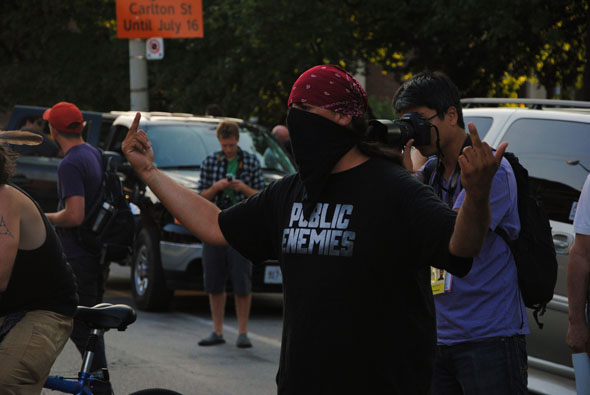 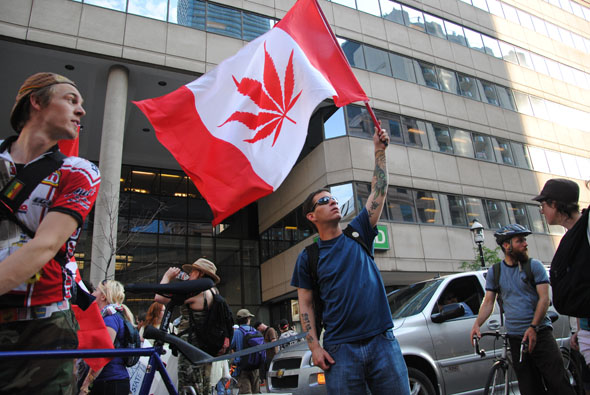 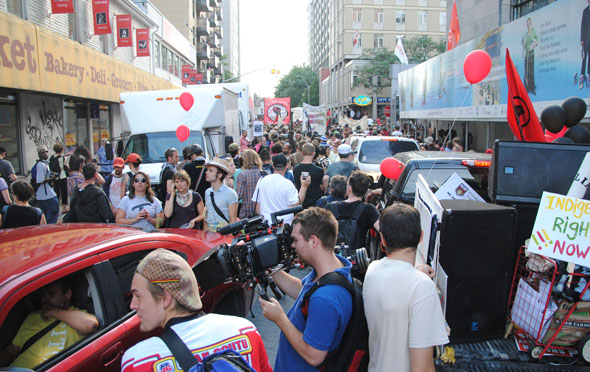 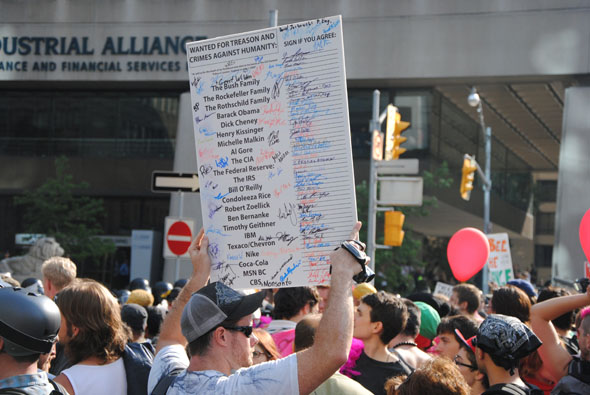 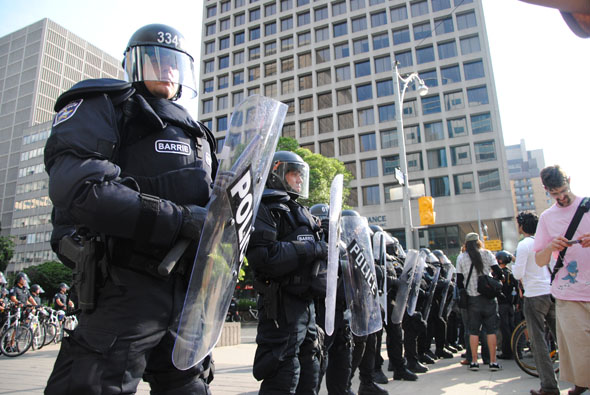 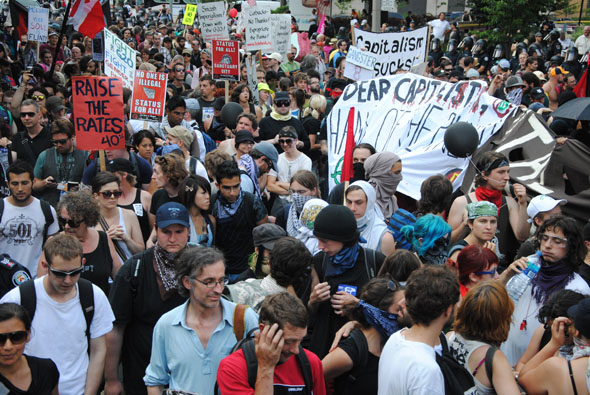 Writing and photos by Tomasz Bugajski. Videos by SupportLocalScene and steelerdan29.