Toronto experienced a rare but minor earthquake this afternoon. The Natural Resources Canada Earthquake information page appears to be being flooded with traffic and isn't responding (not good from an emergency info source!). 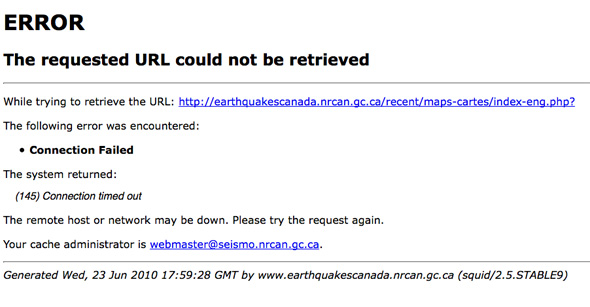 680news is reporting that it was felt in Ottawa as well. Some web forum users in Montreal are saying they felt it too.

The U.S. Geological Survey is showing a M5.0 centred near the Ontario-Quebec border, not far from Ottawa.

Here's an indication of where the epicentre was and how far away it was felt: 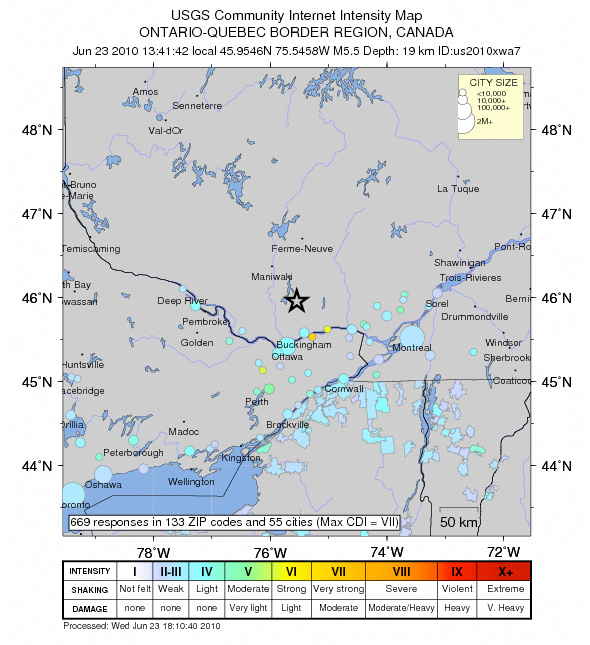 Within a few minutes of the earthquake, this photo, taken at a drug store in Ottawa, arrived in my inbox (courtesy of Katherine Bruce of Ottawa, ON). 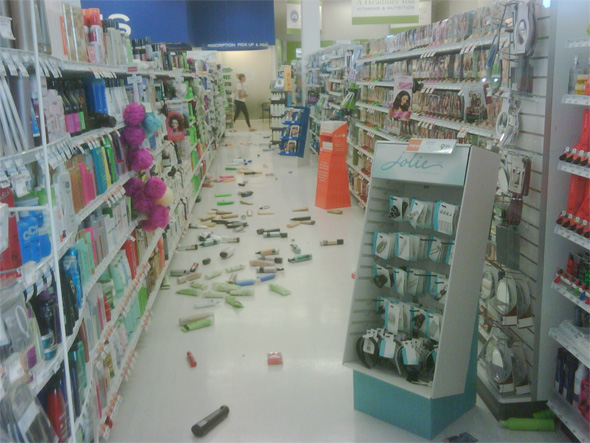 People got their funny on on YouTube as well:

And the City of Toronto issued the following press release:

The City's Emergency Operations Centre is up and running in preparation for the G20 so the City is uniquely prepared to respond to the event. We will continue to monitor the situation and will report as necessary.

Residents should follow the instructions of their building management.

The City has received no calls concerning bridge, building or other infrastructure problems.

While not applicable to this event, in future, should there be a major or more serious earthquake:

Residents should stay away from glass, windows, outside doors and walls. DROP to the ground; take COVER by getting under a sturdy table or other piece of furniture; and HOLD ON until the shaking stops.
If there isn't a table or desk near you, cover your face and head with your arms and crouch in an inside corner of the building.

If outdoors - stay there. Move away from buildings, streetlights, and utility wires. Once in the open, stay there until the shaking stops.

If in a moving vehicle, stop as quickly as safety permits and stay in the vehicle. Avoid stopping near or under buildings, trees, overpasses and utility wires.