On a very hot and stuffy Tuesday evening, Better Ballots, a non-partisan civic advocacy group, hosted a mayoral forum on voting reform at the University of Toronto's Hart House.

Other than the extreme heat and perspiring audience, what made this debate unique, however, was the inclusion of two candidates outside the top six -- Rocco Achampong and Keith Cole, who were selected to attend by an online poll held last month.

After a mostly predictable round of opening statements, the eight candidates gave their position on fourteen voting reform options. Topics ranged from extending the vote to permanent residents and lowering the voting age, to introducing term limits for councillors. 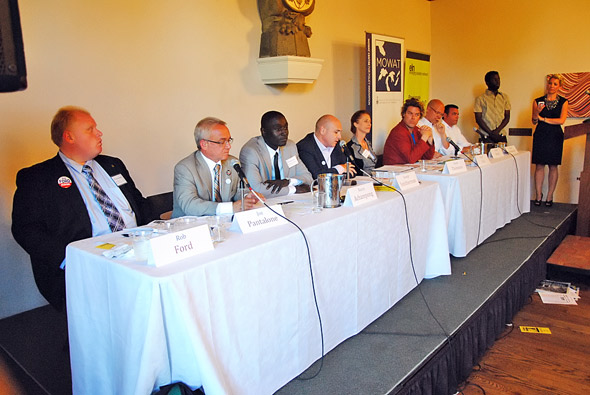 Sarah Thomson, Giorgio Mammoliti, Joe Pantalone, George Smitherman, Achampong, and Cole were in favour of extending the vote to permanent residents,Rossi was against, and Ford said he was unsure.

On lowering the voting age to sixteen, Cole, Ford, Pantalone, and Achampong supported the idea, while Smitherman said other things need to be tried first, and Thomson, Mammoliti, and Rossi were against it.

Rossi threw the first punch of the debate while talking about online voting. "Online and phone voting should be pursued...so long as we don't use the same consultants as Mr. Smitherman in eHealth," he said to his cheering supporters.

Mammoliti then took on Rossi, with one of the fiercest jabs of the debate, after Rossi remarked that Mammoliti hadn't made the best of his 15 years on council. "I think you're wrong on every single issue," Mammoliti shot back. He went on to attack Rossi for supporting term limits on councillors, accusing him of not caring about elected officials.

Later, Thomson and Pantalone teamed up on Ford against his plan to cut city council in half. Thomson said it wouldn't solve the city's budget problems, and Pantalone laughed, asking: "why not just reduce it to one?" 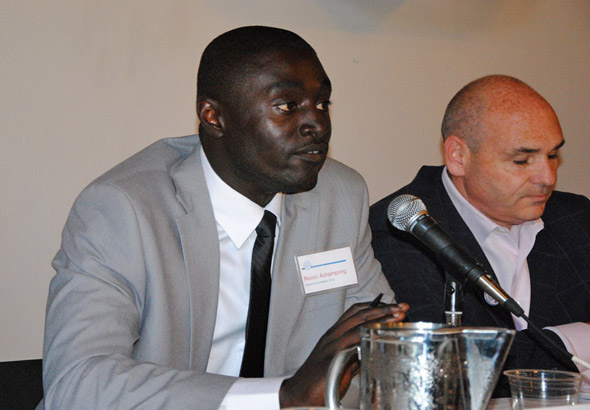 The candidates went on to talk about ranked ballots, instant runoff voting, and pre-election contribution disclosures. But the most interesting part of the debate was watching Cole and Achampong--and the handful of other candidates who had a chance for a one minute speech.

The two winners of the Better Ballots poll blended in easily. Achampong delivered a professional performance and Cole an entertaining one. But since most of the forum's questions required a simple support or oppose, it made it hard for anyone to stand out. 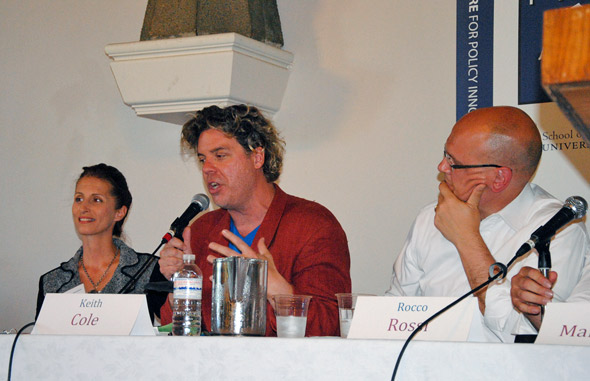 Cole, who came dressed in shorts and a red blazer, handled himself well but was sometimes ridiculous. "I really don't understand this...it doesn't make any sense to me," he said about ballot structures. Later he went after Kyle Rae, who he called "old and fat." Cole did get the loudest applause of the night, however, when he joked about building a bike lane in the middle of the debate room. 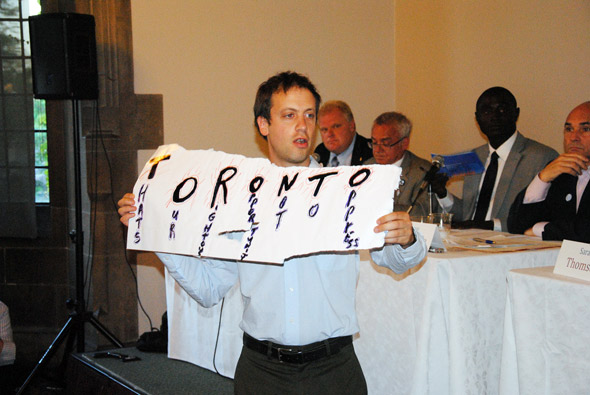 Kevin Clarke made a bit of scene last night too. He came into the debate room wearing roller blades, and made a ruckus by yelling at the media. During his one minute speech he made Dave Meslin, the project coordinator of Better Ballots, hold up a nonsensical sign about the righteous who oppress. 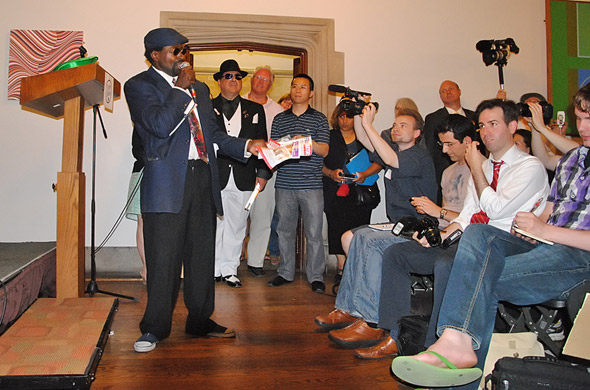 His speech didn't make much sense either. "I will be mayor...but who I am doesn't matter" he said. "The children are the first world leaders," he declared. And later, after a little trouble getting him off stage, he began to sing loudly outside the building.

But Himy Syed, a candidate of South Asian background and suspected to be @rebelmayor on Twitter, probably had the line of the night: "We've sent enough cowboys to city hall, now it's time for an Indian." The crowd and Twitter went wild, repeating this line the rest of the night.

This debate had fewer moments of tension than some of the previous ones, but it was also easy on the candidates. Questions required a simple yes or no, which meant that it was hard for anyone to sound bad. The good side of this format was that we heard the mayoral hopefuls give clear positions on specific issues, something rare in this campaign, and elections in general.

Correction June 2, 2010): The original wording of this post labeled Himy Syed as @rebelmayor on Twitter, when, in fact, there is only suspicion that this is the case. The post has been updated accordingly.