University campuses, including the University of Toronto's, have often served as safe havens for dissent and political organizing. From Berkeley to Paris to Oaxaca, students and the public have used campuses as a space to organize for a more just and equitable world. Some of the most important gains of the anti-war, feminist, civil rights, and pro-democracy movements (to name a few) were the result of political organizing on university campuses.

At other moments in history, at Kent State and Jackson State, in Mexico City and Beijing, universities have opened their campuses to armed forces that attacked and killed students and their allies. Rather than create safe havens for dissent and political organizing, these universities exposed their students to violent police forces who gassed, beat, and shot them.

Next month, U of T's administration can decide where it stands on this divide. Will it offer students and protesters a sanctuary or will it invite police repression? Will it create a space where the public can debate and learn about the policies of the G20, or will it barricade its gates limiting protesters' abilities to organize?

Last Friday, Cheryl Misak, U of T's Provost, announced the administration's cowardly decision to close the St. George campus during the G20. The memo explicitly cites protests as a threat to students, staff, and faculty, and notes that as of Wednesday, June 23rd, "the St. George campus will be for all intents and purposes closed."

This closure will displace some students from their homes (some to temporary housing in Mississauga and Scarborough). It will force instructors to reschedule their exams. It will separate members of the University community from the resources that they use everyday for recreation, research, study, and work.

Perhaps more problematically, all events on campus have been cancelled, including a forum on the G20 organized by the Council of Canadians. In typical U of T fashion, the university did not consult students, staff, or faculty before making this decision, despite the serious impact it will have on their lives. 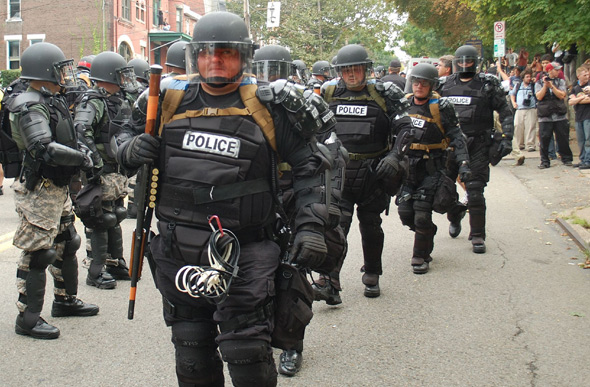 Worse yet, U of T's administration has come to the bizarre conclusion that protesters are a threat to it employees and students. This conclusion marginalizes protesters and legitimizes police violence against them. It depicts those who are organizing against the G20 as outsiders, despite the fact that many are the very students, staff, and faculty the university purports to protect.

This is troubling for many reasons. Protesters were never a threat to anyone at the last G20 in Pittsburgh. The police, on other hand, brutalized protesters, bystanders, and students alike. On one particularly terrifying evening, the police indiscriminately arrested 110 people including a jogger, three journalists, and numerous bystanders. They rampaged through the city's Oakland neighborhood injuring students, firing OC gas into dormitories, and harassing prisoners. In one moment eerily reminiscent of Abu Ghraib, visiting police officers from Chicago forced a detainee to his knees while they posed around him for photos.

In light of what happened in Pittsburgh, why is U of T expelling students and staff from campus and inviting the police to secure it? Surely if they were concerned about violence the clear solution would be to ban the police from campus? Instead of walling off the world, maybe they should consider inviting it in? Campuses should be places for dissent and the free exchange of ideas, not for barricades and riot police.

Patrick Vitale is a PhD candidate in the Department of Geography at the University of Toronto and the Liaison Officer for CUPE 3902.