Toronto through the eyes of George Smitherman

George Smitherman has been leading the polls since he entered Toronto's mayoral race back in January. And despite not revealing much by way of concrete policies during the early months of the campaign and the sudden resignation of his original campaign manager in early April, he remains the front runner.

After Jeff Bangs's departure, Smitherman introduced Bruce Davis as his new campaign manager. During one of Davis's speeches to supporters, he said that he wanted to "unleash George," and his energetic tone seemed to inaugerate a new phase of the mayoral race.

Shortly thereafter a new campaign website appeared, Smitherman pledged to create "signature parks," vowed to keep Toronto-Hydro public, and called for Toronto's Rouge Park to be made a national park. So relative to what Torontonians had seen and heard of him before, Smitherman was finally revealing himself to voters. And yet he still seemed quite reserved -- far from the "furious George" that some expected.

Smitherman's self-proclaimed "official" campaign launch will take place tomorrow, at which time he'll be making an announcement about his transportation policy as part of the process of sharing the concrete policy proposals that make up his platform.

I sat down with him earlier this week to talk about Toronto and his ongoing mayoral campaign.

You were raised in Etobicoke but now you live downtown, did you feel pulled to the city while growing up?

From the time I was a little kid, my father and I went to a lot of activities at Maple Leaf Gardens. So even though I was a suburban kid, I was intensely encouraged by my parents to go downtown. I can remember as a pretty young kid going to Metro-Croatia soccer games at Varsity Stadium and stuff like that. So, I feel like I had the best of both worlds. I wouldn't give up the suburban experience that I had, and I was always encouraged to love activities downtown.

Do you have good memories of the older Toronto?

What I experience now is DĂŠjĂ vu. Recently I was out at Islington Station and Royal York Station, and had a memory of these as these gleaming edifices marking the sign of progress of the times...now they're just kind of dowdy, old, and tired. Sometimes they don't even look like they've been cleaned. So for me it's very evocative to be in those subway stations especially in the west end that I frequented so much as a little kid.

Does anything about Toronto make you nostalgic?

A source of nostalgia for me, and a strong influence in my life because I live very close to it, is Maple Leaf Gardens. My father is not with us anymore, and he was a really hard working man. A lot of the quality time that I experienced with him had to do with Maple Leaf Gardens. Leaf games, Toronto Toro games, wrestling, and a whole variety of activities.

During your leisure time -- if you have any right now -- what kind of things do you like doing in Toronto? Do you have any favourite restaurants or parks you frequent?

Just generally as a theme, Christopher [Peleso, Smitherman's husband] and I -- and now with the kid, even more so -- are really inclined to be outdoors. Parkland is such an important part of that. I really love the Island, especially running and rollerblading from one end to the other.

I've also come to experience, as I was doing training for a long bicycle ride, the beauty and magnificence of Rouge Park. That's why I think we should continue to push for that to be a national park. It's an incredible asset.

We've been spending a lot of time in Allan Gardens. My son, his best new word is "dog," because we have one of those great dog parks there...

But what gets me most excited is tennis; I really love playing.

What's it like to be a new father as this campaign gets more intense?

The role that I had before I left the province was pretty busy and had quite an intense pace. So the intensity that I'm working at now is not unfamiliar. If you think about it, I'm like a political entrepreneur. I'm not being paid; I therefore don't have cabinet meetings, question period, caucus meetings, etc., so I have more flexibility over my own time. And certainly for the first six weeks or so that the baby came, I really was able to prioritize my time and have really big positive impact moments every single day. And that was a blessing.

It seems counter intuitive, I have to admit, because I'm obviously campaigning quite aggressively, but I have more flexibility over my own schedule than at any time in the last 10 years. That's really meant that me and Michael have had lots and lots of time together.

It freshens up your perspective. One of the things that I'm processing is that in the good weather I can take the kid to park, but where do you take your kid in the winter? All of our play areas, aside from McDonald's, are outdoors...That's something that has to be looked at. I can certainly see it as necessary for families to have affordable and accessible opportunities like that.

Another thing that's really changed my perspective, because I'm pushing a stroller a lot, is just how much of the infrastructure of the city is in such crappy shape. 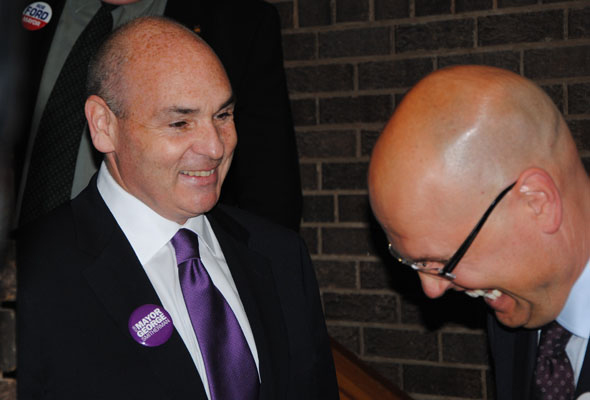 A typical [work] day turns out to be something between 13 to 15 hours, and usually with something like 12 to 14 distinct things occurring in that time frame -- across the landscape of policy development, outreach, fund raising, etc...

One thing that's an interesting reflection on the life of a politician is how many costume changes a day might entail. You can have circumstances when (especially during a weekend) you go through a range of events that might see you in formal wear, the traditional costume of an ethno-cultural community, something sporty -- because you know, we're doing runs and stuff like that -- and some days, the more overwhelming aspect is trying to figure out in the morning how you should dress, and trying to find your way through the course of the day and make all the transitions to look like you're appropriately outfitted for the event that you're going to.

That's a bit of inside baseball...it's one of the quirky bits...

You've talked about how it's your destiny to be mayor. Do you really feel that?

There are people who I meet in politics whose parents told them from the time they could talk that you're going to be the premier or the prime minister, or this or that. In my family, I'm pretty sure they thought I was going to be a truck driver...

I wouldn't say I grew up thinking that was going to be my destiny. I've just been given extraordinary opportunities, and those broaden your horizons and open up new possibilities. I was on a very good trajectory in the province of Ontario, from a career standpoint...

Finally, what's the new phase of the election going to look like after your "official" campaign launch this Friday?

I started this path in November. So I left the cabinet, and in January I left my legislative seat to set up shop for this campaign. At first [the campaign office] was a very lonely place, with one or two people. Now you see it's a constant beehive of activity. Once a month we have what we call a family dinner and invite the people that are working on the campaign for a meal. So last night [at one of these] the place was teeming with people with a great level of energy. And forty or fifty percent of the faces, I actually hadn't met them before. We've been bringing in an incredible number of new people.

Now our fund raising is going great, the organization is coming along wonderfully. It's a big city and there are always more stones to turn over.

Friday is exciting because it's the first of three major platform planks. What that affords us is the chance to produce the brochures which allow you to take your campaign more to the retail level. So from Friday forward we get to go do subway stops and go door to door. I love retail politics. This is the essence of politics for me. This is when you have that connection with voters...

Editor's Note: blogTO has already featured Rocco Rossi as part of our Toronto through the eyes of series, and will have an upcoming feature on Joe Pantlone as part of our plans to speak with each of the six leading candidates.