Toronto is getting more sharrows, but do they actually protect cyclists?

Toronto has recently announced plans to increase the number of sharrows on city streets. What are sharrows, you might ask? Well, they're basically just a bicycle symbol (with a couple of chevrons thrown in for good measure) painted on the side of a road. Not be equated with a bike lane, sharrows are sometimes placed on streets that don't have enough width to allow for a dedicated and unshared space for cyclists.

In an optimistic press release, Gary Welsh, the City's General Manager of Transportation Services, claims that "these pavement markings are an excellent way of encouraging cyclists and motorists to share the road safely."

First painted on Toronto streets in 2007, one of the better examples of sharrows can be found on Lansdowne Avenue south of Bloor Street. Having spun down this particular stretch of road at least 50 times in the last couple years, I'm not convinced that these symbols offer a whole lot of protection for cyclists.

Despite the fact that Lansdowne is not the most heavily trafficked of streets -- by vehicles or cyclists -- the constant presence of parked cars diminishes what little effectiveness the sharrows have in the first place (and sometimes obscures them altogether). Having to dart in and around such obstacles defeats the very purpose of having a marked space for cyclists. The thing that makes bike lanes safer for everybody is that they tend to ensure predictability. Cyclists stay where they are expected to be, and, as a result, drivers only really need to worry about them when turning.

Sharrows don't make things more predictable at all. Much to the dismay of both parties, on routes that feature such markings, cyclists must still move significantly away from the curb (around the parked car) and nearer to traffic on a regular basis. Are drivers more prepared for this based on the road markings? Perhaps. But, shouldn't city drivers already expect the almost constant presence of cyclists?

At the end of the day, the general problem with sharrows is that they mark a sort of no man's land: while they recommend that cyclists and drivers respect each other's right to the road, they don't prohibit either party from infringing on the other's space.

A fitting analogy would be highway signs that read "slower traffic keep right" Even those who've spent scant time behind the wheel know that this directive is widely ignored. Sure, many drivers do pay it heed, but those who fail to comply are as common as they are annoying. 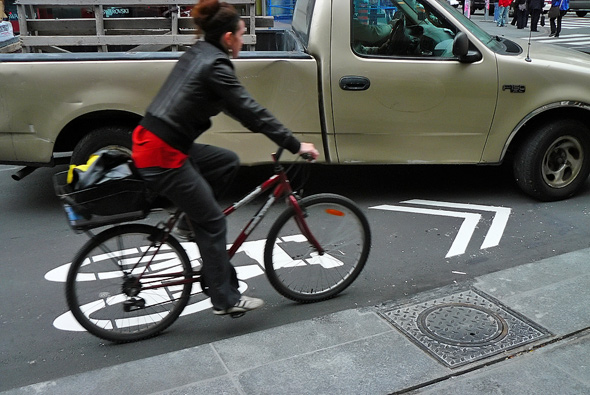 As is the case with sharrows, the order to yield to faster traffic lacks any real weight. What, after all, are the consequences for ignoring the car(s) coming up the rear? A little road rage -- some honks, high beam flashing, a flipped bird. So long as one is doing the speed limit, it's highly unlikely that he or she will get a ticket. It's not as though this sort of obliviousness is easily proven to be "careless driving."

Anecdotally speaking, one can most readily expect compliance with the "slower traffic keep right" directive on two lane highways, where traffic is at once less heavy and more predictable. And if the connection I've made here is at all valid, this is a most damning comparison.

Along with Lansdowne, where sharrows already exist, the City has added or plans to add these symbols to the following roads: College Street (between Manning and Lansdowne), Spadina Avenue, Bay Street, Lappin Avenue, Hallam Street and others to be named later.

I'd categorize Hallam, Lappin and, to a lesser extent, Lansdowne as counterparts to the two-lane highway. It's nice to throw cyclists a bone by painting sharrows on these streets, but they don't see enough traffic to make the whole exercise worthwhile. Like outfitting the class nerd with a box of condoms on prom night, the safety-first stance is a nice thought, but almost surely unnecessary.

Perhaps more problematic is the other streets upon which sharrows will be painted. To the same extent that it's become a sort of "survival of the fittest" on the stretch of the 401 that features a split between collector and express lanes (a.k.a the part that passes through Toronto), these routes are so heavily travelled that sharrows are unlikely to offer much in the way of protection for cyclists.

There are simply too many cars, pedestrians and other bikes for such symbolic gestures to amount to much in the way of overall safety.

But doesn't the painting of sharrows mean that the city is thinking about cyclists?

But, cyclists and drivers alike need more concrete action to ensure that we all get to where we need to be without incident.