Strong winds are causing a number of problems today. Gusts created debris at track level that brought down the TTC subway line between Kipling and Islington stations, then not long after that mess was cleaned up, a tree fell on the tracks between Jane and Ossington, again bringing the Bloor-Danforth subway to a halt. Crews are responding quickly to get subway service back up and running. UPDATE: the Bloor-Danforth line is back up and running as of 4:45 p.m.

Gusts continue to cause problems throughout the city, bringing a number of hydro lines down, and starting a fire at a hydro vault in the Annex. As power is affected, the number of calls to rescue people trapped in building elevators also spike.

To get a sense of how widespread the wind effects on hydro lines are, take a look at the emergency response by Toronto Fire in just the last half hour alone. Along with the sounds of leaves beings rustled violently and my windows shaking, I've been hearing car alarms and sirens galore.

Gusting winds are expected to temper down and taper off as the evening progresses. Until then, stay safe out there. 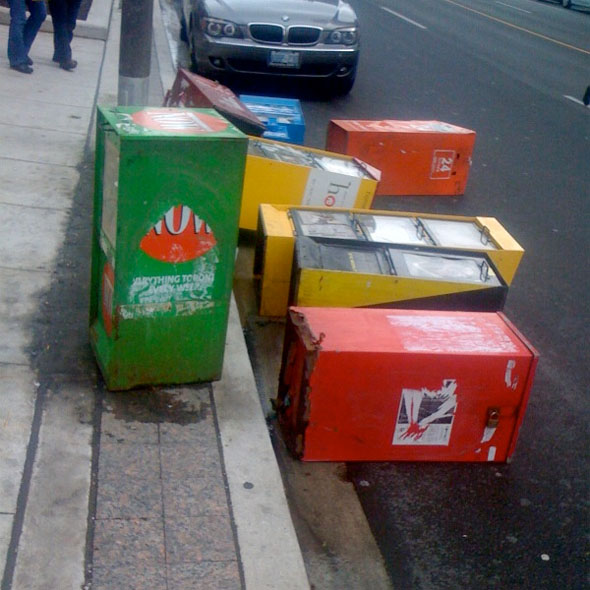 Lead photo of down power equipment by joerayment. Photo of newspaper boxes blown over sent to us by reader JJ Fueser.

Got photos or video of wind damage? Send to editors@blogto[dot]com or add them to the blogTO Flickr pool!