For most Torontonians, May 24 signals the unofficial beginning of summer. But hovering underneath the exodus to cottage-country and the temporary over-population of Trinity-Bellwoods Park, May 24 has always been a reminder of our colonial roots, a day dedicated to Britain's longest reigning monarch.

It was 1845 when the Legislature of the United Province of Canada (our country at that time was still a colony under the British rule), proclaimed May 24 as a public holiday.

And yet, a 1901 article from the Toronto Daily Star, outlining the history of celebrations in the city, claims that May 24 was in actuality only a half holiday. In 1849, a petition was delivered to City Council, urging the councillors to pressure the colonial authorities to proclaim the day as full holiday in order to celebrate the fact that the British Empire managed to avoid the turmoil of the 1848 nationalistic revolutions that had swept across Europe.

It's possible that the colonial authorities were persuaded to pass the declaration under the influence of the strong loyalist feeling in the city, which unofficially celebrated the coronation of Victoria in 1837. On July of that year, a big barbecue was organized in the basement of the American House, a hotel that stood at the corner of Front and Yonge Streets. To mark the occasion, an ox was roasted and then taken to St. Lawrence Market, where a joyful feast took place. In 1901, the year of the queen's death, the Star nostalgically reported that Toronto was the first city in the British Empire to commemorate the birthday of the monarch.

Another major celebration to honour the Queen took place in 1848. The night started off with a military march, followed by a firemen procession that appropriately ended at Queen's Park, where politicians and other prominent citizens gave their speeches. Members of several different societies, including the Oddfellows, were in attendance. The streets were decorated, and all the windows of the houses on major streets were lit up with gas and candles. Fireworks, most likely used for the first time to mark May 24, illuminated the sky all night long. 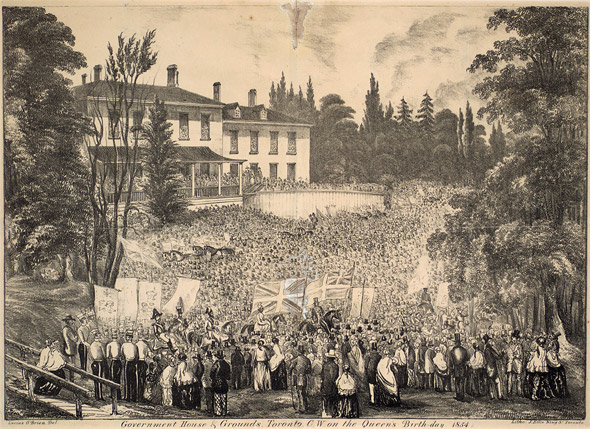 According to William Kilbourn's Toronto Remembered: A Celebration of the City, the first large-scale and official public celebration of Victoria Day in Toronto took place on May 24, 1854, when a crowd composed of five thousand Torontonians, including policemen, firemen, members of national societies, and so-called ordinary citizens came together on the grounds of Government House, near King and Simcoe Streets, in order to celebrate their British heritage. In addition to this gathering, there was a garrison parade from Fort York that took place on the same day as part of the festivities. For the most part, the people that inhabited the city at that time regarded themselves as British and perceived Canada as a part of Victoria's vast empire, which had been gradually increasing in wealth, prestige, and power since the onset of the Industrial Revolution at the beginning of the century. 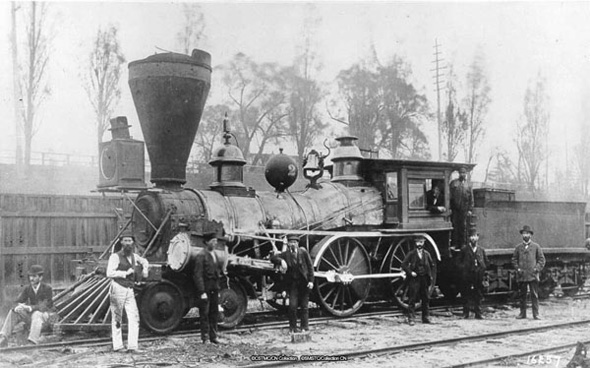 In 1853, Toronto celebrated the anniversary of Queen's birthday with the inaugural excursion on the newly constructed Ontario, Simcoe and Huron Railway, later known as the Northern Railway of Canada.

For the remainder of the nineteenth century, celebrations were varied, including morning salutes from the site of Toronto's first jail at Front and Berkeley Streets (where a small brass cannon was located on the top of the roof), various military marches (which traditionally included Queen's Own Rifles) and firemen processions (accompanied by marching bands), and horse races on a long-gone track near Queen Street and the Don River.

The fireworks celebrations that will take place at nightfall today are not the only legacy of such celebrations. On May 27, 1903, a monument of Queen Victoria was unveiled on the eastern part of Queen's Park, further marking this city's colonial roots. 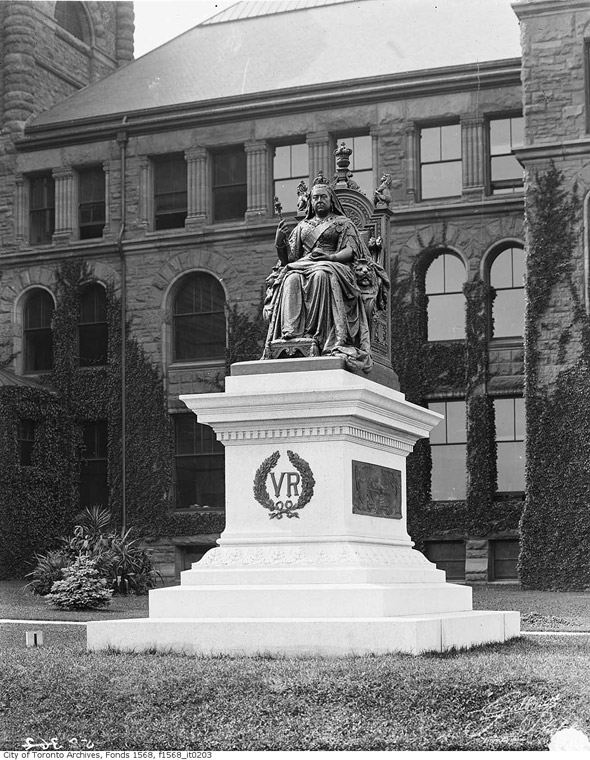 All images from the Wikimedia Commons, with the exception of the last which is from the Toronto Archives (fond and item information located at the bottom).