Known originally as the Horticultural Gardens, Allan Gardens was Toronto's first civic park. Located on the south side of Carlton Street at Sherbourne Street, it consists of ten acres of parkland and six greenhouses, where both seasonal and permanent plants are cultivated over 16,000 square feet of garden space.

Limited public space existed in the growing city before the creation of the Gardens. There was some parkland located west of the Exhibition, but at that time, it was considered to be well beyond the city limits. Scattered, small parks were also located on the grounds of several institutions, including the Parliament Buildings on Front Street, and Government House and Upper Canada College, but a proper public space for the recreational use of Toronto's residents was lacking.

According to G.P. deT. Glazebrook's The Story of Toronto, George William Allan was a long-time president of the Horticultural Society of Toronto, and in 1857 he proposed that he would sell five acres of his Moss Park estate to the city at tantalizingly low price on the condition that the land be developed for horticultural purposes and the benefit of the public.

Allan was also a municipal politician, first working as an alderman, who was elected in 1855 as the 11th mayor of Toronto. He later entered national politics, serving as first as a senator and then as the Speaker of the Parliament. 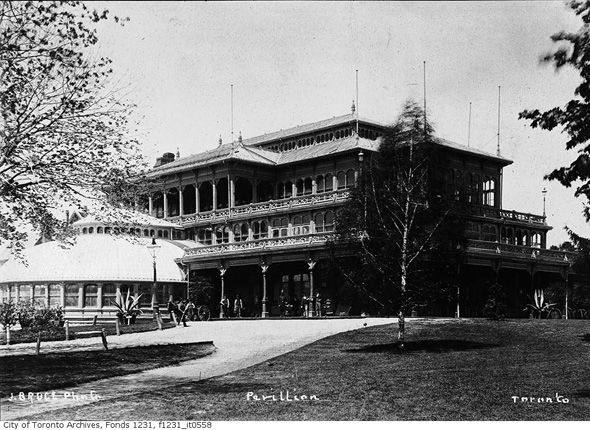 Numerous prominent citizens urged the city to purchase the five acres that Allan was willing to sell on the grounds that there was not a single park or public square for recreational purposes in the highly dense, industrialized city. In Cabbagetown Remembered, George Rust-D'Eye writes that the park was officially opened on September 11,1860 by the Prince of Wales, who planted a maple tree to mark the occasion. In 1878, a pavilion modeled after the Crystal Palace (a structure erected for the British Great Exhibition of 1851) was built, and in 1885 the grounds were beautified and laid out with lawns, flower beds, and benches.

Three years later, the ownership of the land was transferred to the city. At one time, the Gardens also featured the largest fountain in the province. When Allan died in 1901, the park was renamed in order to commemorate his service to the city and its people. On June 6, 1902, the pavilion was destroyed by fire, which had served as the city's only large concert hall for the prior twenty years. It was replaced in 1909 with the present Palm House, designed by R. McCallum.

In 2003, the University of Toronto donated a greenhouse originally located at the corner of College Street and Queen's Park Crescent (built in 1932), which had been used by the Department of Botany to conduct research on pollination and plant disease. It currently houses Children's Conservatory, a program offered to schools located in high needs neighbourhoods. 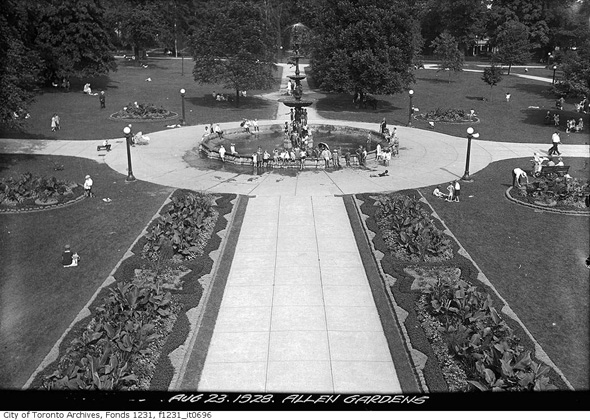 The grounds also played an important role in the life of the nearby Cabbagetown and Don Vale communities, and even though the green space was located outside of their respective geographical boundaries, it was the largest indoor public space in the city, which provided the residents with a venue for public and political debates and gatherings.

A little known event, the Allan Gardens Riot, took place on May 30, 1965. It was a response to the announced rally of the Canadian Nazi Party, at which the self-proclaimed leader, William John Beattie, was scheduled to give a speech. The following day, the Toronto Daily Star reported that about four thousands counter-demonstrators watched as eight men, suspected to members of the party, were severely beaten and injured. The riot lasted only fifteen minutes due to the rapid response of the police. There are conflicting accounts on the reasons behind this event, and Mayor Philip Givens blamed the media for sensationalizing the meeting even before it took place and for falsely claiming that the party had a city permit to hold the meeting. 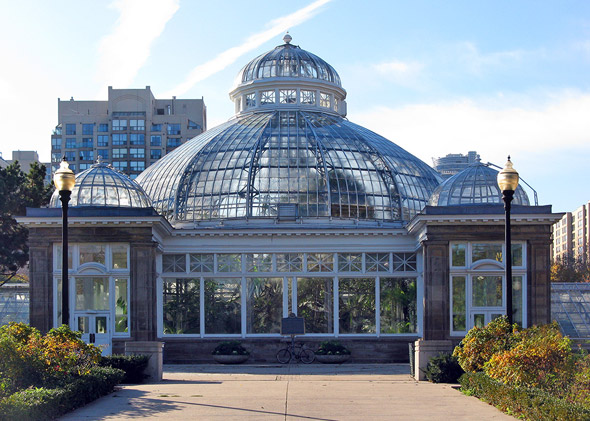 Despite the fact that the Gardens are located in a central location and easily accessible by transit, several studies conducted at the beginning of the 2000s concluded that they were not a popular, city-wide attraction. This was mostly associated with poor maintenance of the grounds and a lack of proper investment in the facilities that would protect the heritage value of the property.

Since 2000, the city has started to revitalize the Gardens along with the enclosing parkland, which includes an upgrade of the existing facilities and revision of the programs available to the public. 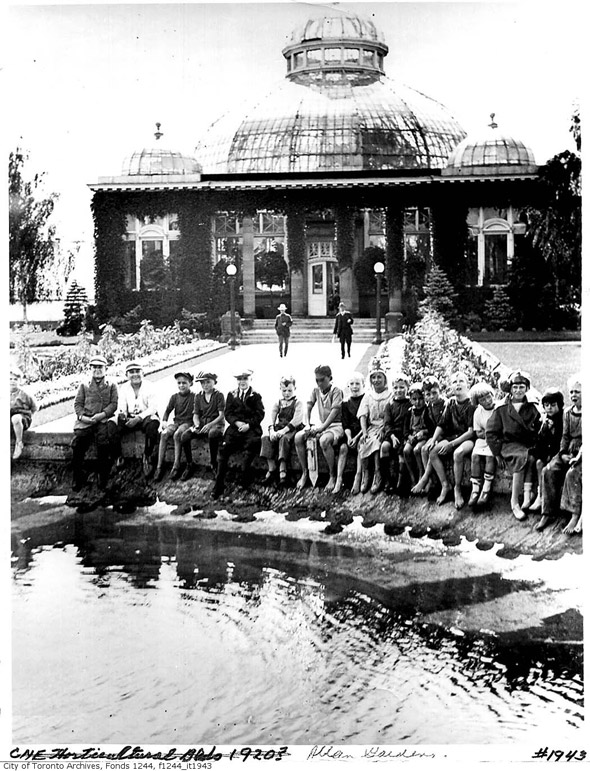 All photos but the second to last are from the Toronto Archives. Fond and series information is contained at the bottom of each image.