When the news broke yesterday that the Crown had dropped all criminal charges against Michael Bryant in connection with the death of Darcy Allan Sheppard, it didn't take long for my initial surprise to pass. While Special prosecutor Richard Peck's announcement seemed to come out of the blue, there was little that was shocking about the substance of his 90-minute court address.

At least on a legal level. Given the permissibility of Sheppard's past encounters with motorists, the level of alcohol in his blood, and the fact that he appeared to display aggressive behaviour both before and during the incident, it's hardly a stretch to conclude that the case against Bryant was without hope of conviction.

Let's not forget that the burden of proof in such a case hinges on reasonable doubt. And, like it or not, it's not unreasonable to think that Bryant was acting in self-defence over the course of the fateful 28 seconds in question.

And yet why is it then, I wonder, that Peck's decision leaves such a sour taste in my mouth? 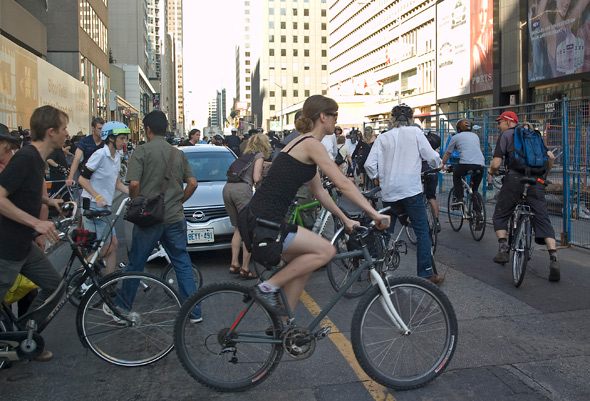 Ultimately the reasons are too extensive to list, but one in particular is worthy of note. In listing his reasons for the dismissal of charges, Peck placed virtually all of the blame on the victim. But even cursory look at the now well-distributed video evidence reveals that should a bike lane have been in place, this tragedy would likely have been avoided.

With little room at the side of the road, it's common for cyclists to pull in front of cars at intersections, particularly when a parked car looms ahead. And it's this proximity that ultimately led to the altercation. If Allan never gets hit from behind, the subsequent interaction between the cyclist and driver doesn't occur. Even if Sheppard had been hell-bent on leaving this hypothetical bike lane in order to engage Bryant's vehicle, the presence of the dedicated space (and his desire to leave it) would have, at a very minimum, made it easier to assign blame.

As it stands, it's nearly impossible to do this. While a team of highly qualified lawyers determined that they couldn't make a case against Bryant, there are few who believe he is blameless. Not only has he failed to explain or justify why he hit the accelerator after striking Sheppard that night, but his explanation that the initial contact was the result of a stalled engine seems rather convenient. 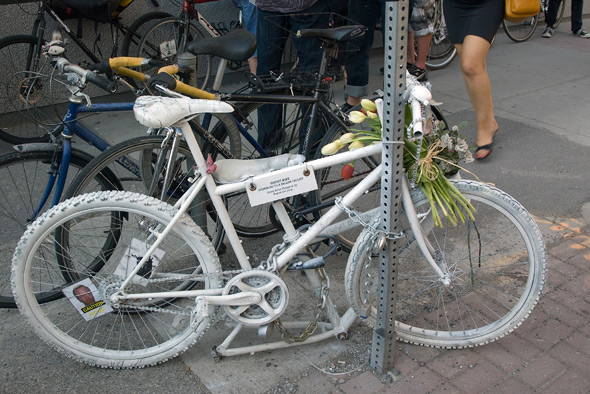 But who I am to speculate? I want to say that I've never seen a car lurch forward like that as the result of a stall, but rationality binds me to the belief that the forensic evidence in support of this scenario was convincing enough to people who know more about this stuff than I do. Not only that, Sheppard wasn't killed as a result of this initial incident. It was after he was struck that the fatal sequence took place.

The fact is nothing is or was straightforward and easy to swallow about this event and its aftermath. So while the Globe may feel confident in calling Bryant's initial arrest the "poisoned arrow of wrongful accusation" in one of the most simple-minded editorials I've ever read, the sheer amount of debate and discussion that yesterday's news has engendered is a reminder that this is one of those occurrences that frustrates our desire for tidy closure. 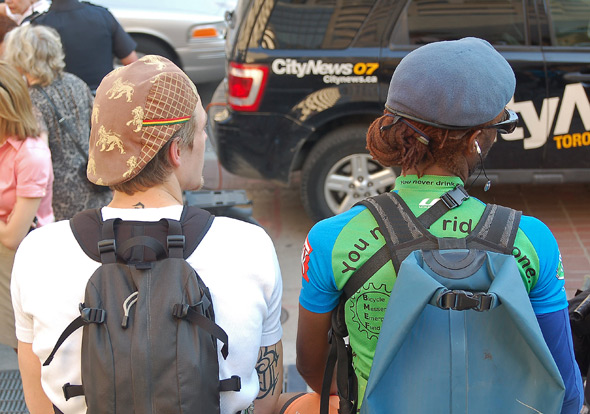 The cyclists that I encountered at yesterday evening's vigil marked the prevailing ambivalence well. Although upset, their loop around the downtown core wasn't really a protest against the Crown's decision. As was the case at the first ride (on September 2, 2009), the gathering was more about displaying solidarity and remembering Sheppard. Murmurs of "it was another bad day" and "the struggle continues" dominated the pre-ride conversation. 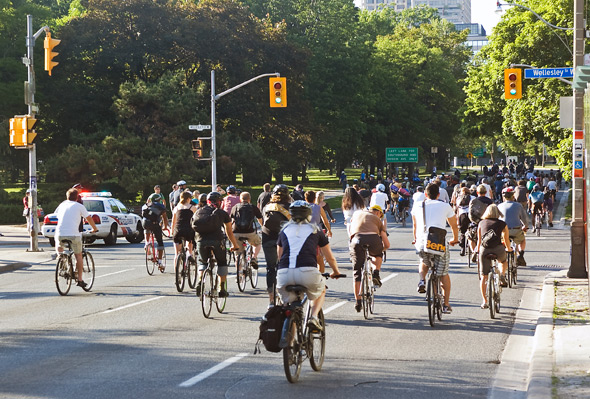 At his press conference yesterday, Bryant was determined to disclaim the notion that his altercation with Sheppard symbolizes a war between bikes and cars in this city. For the most part this is true. From Sheppard's apparently increasing agitation with motorists to the fact that Bryant was driving a convertible with the top down, the circumstances on August 31 were exceptional. But, make no mistake, events similar to this happen all the time.

As I rode my bike to the vigil yesterday, I was first greeted by the driver of a red Mazda gunning the engine and racing along my street at what I would estimate was double the 30 kph posted speed limit. As he passed me, I gave him the finger. That this was an idiotic thing to do based on my destination is not lost on me, but the frustration I felt was palpable, and I failed to resist partaking in this knee-jerk reaction. Later, after I had calmed down, I witnessed a women riding along Bathurst struck by someone opening a car door. Neither bike nor vehicle were moving particularly fast, which allowed her to escape injury but also to berate the vehicle's passenger for not keeping an eye out.

These incidents didn't escalate. But, they most certainly could have. Drivers and cyclists city-wide can, no doubt, share similar anecdotes. To some degree this is inevitable, the product of the limited space the urban landscape provides its many users. But what is perhaps of greatest concern is that it seems that little has been learned from Sheppard's death. 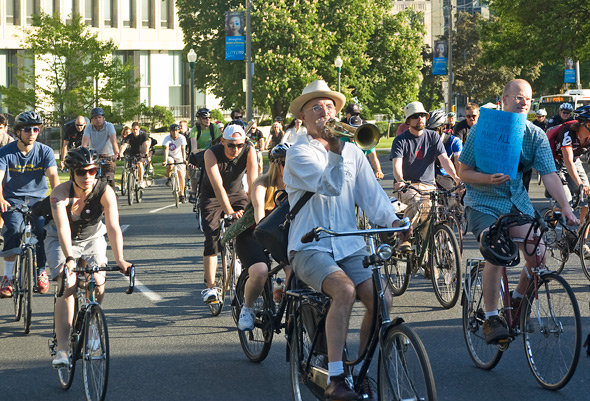 As Michael Louis Johnson, a rider in last night's vigil, played a song he wrote for Sheppard on his horn (titled A Requiem for Justice), I had the alarming thought that the odds were pretty good that I'd find myself covering a similar memorial at some point in the future. The repeated accidents, shouting matches and altercations between motorists and cyclists are, quite simply, a recipe for disaster.

This is an election year. This should be an election issue. But has there ever been a crop of mayoral candidates who seem less interested or qualified to address what remains a persistent and serious problem?