Doors Open Toronto is this weekend. The 2010 edition is once again expected to draw over 250,000 people (read: potentially long line-ups!) to sneak a peak at places not normally open to the public while learning a thing or two about the city's architectural fabric.

Fittingly, architecture is the theme of this year's Door Open and that means there will be a lot to see and do for both the architecture geeks and casual enthusiasts out there. Several venues will have their architects on hand giving tours and answering questions - City Hall's Podium Green Roof, the Brick Works, new community housing at 501 Adelaide St. East, and the TTC Mount Dennis Bus Garage are a few of the most interesting.

Plus, ten of the city's leading architectural firms have opened their offices for public tours. Here's your chance to check out where the masterminds behind the Brick Works redesign (du Toit Allsopp Hillier), the Four Seasons Centre for Performing Arts (Diamond and Schmitt Architects), and the Eaton Centre (Zeidler Partnership Architects) work.

It will also be the last opportunity to see the beautiful office of Moriyama and Teshima Architects (the firm currently working on the Aga Khan Cultural Centre and the extension on the Toronto Reference Library), as the building will soon be demolished to make way for condos. 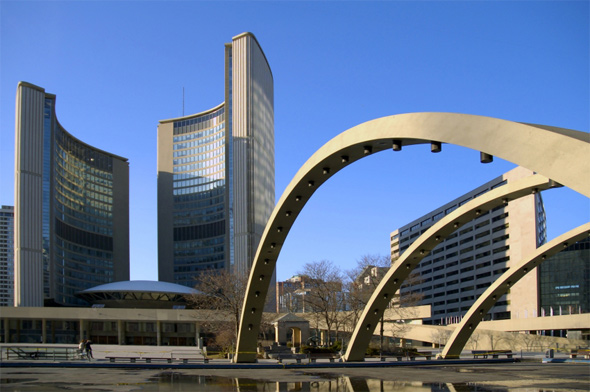 If walking is your thing, the Toronto Society of Architects has just launched two guided walking tours: "Toronto's Cultural Renaissance: Buildings of the 21st Century" and "Skyscrapers of the Financial District". These tours are free for Doors Open, and happen hourly from 11 a.m. to 3 p.m. Register at the TSA's table at Toronto City Hall from 10 a.m. Saturday and Sunday because space is limited.

Shawn Micallef, Toronto's most famous flaneur and author of the new book "Stroll: Psychogeographic Walking Tours of Toronto," leads a stroll through the Annex from Coach House Press on Saturday at 1 p.m.

And at Evergreen Brick Works, Diaspora Dialogues is hosting literary walking tours of the quarry on the theme of labour and architecture.

With a whopping 40 new locations added to the 100+ locations already on the roster I have already started thinking about where I am going to focus my efforts.

Here are some of my top picks for Doors Open Toronto 2010:

TTC Mount Dennis Bus Garage
The 250,000 square foot Mount Dennis Garage services about 245 buses and is one of seven garages at the TTC. Tour the facility to check out the 4 cleaning work stations, 16 repair hoists, 2 pits and 1 steam cleaning room, then hop on a bus and take a ride through the bus wash.

Rogers Studios
For the first time the street front studios at Yonge & Dundas will be open to the public. This state-of-the-art studio space was completely redesigned by Quadrangle Architects Limited as part of the city's bid for the Olympics. Architects will be on hand to talk about the involved process of retrofitting the building.

City Hall Podium Green Roof
This brand new public space is officially opening as part of the Doors Open festivities and is the city's largest (35,000 square feet) publicly accessible green roof garden. Landscape gardens featuring regional plant species, the Council Chamber courtyard, the Podium Terrace overlooking Nathan Phillip's Square, and new walkways providing great views of the city are among a few of the highlights. Architects will be on hand for guided tours.

Portlands Energy Centre
This brand new, $730 million, state-of-the art generating station will be open to the public for the first time this year. The station, powered by natural gas, operates during peak hours to give the city the power bump it needs - 550 megawatts servicing about 500,000 homes.

Stephan Caras Design Inc.
A must see for the couture cognoscenti, this beautiful building was constructed in 1905 and once housed the Canadian Bank of Commerce. Now it is the world headquarters and couture fashion house of Stephan Caras Design. The interior was thoughtfully designed by Caras himself, blending a modern vision with many of the historical flagships of the building such as the gorgeous spiral staircase on the main floor, or the original vault door that has been mounted and framed.

Pape Avenue Cemetery
Opened in 1849, this cemetery was the city's first Jewish burial site. Due to security concerns, it has been locked up and off limits to the public for years, but it will be open with full accessibility during Doors Open. Guided tours will examine Jewish burial customs, the history of the early Jewish community who founded the cemetery, and the artistic imagery that is on the gravestones to represent the deceased.

Humber Arboretum Centre for Urban Ecology
The Humber Arboretum was one of Toronto's first LEED Gold-certified buildings, and is a public space dedicated to education, community programming and research into urban ecology and sustainable development. The centre itself has a whole whack of sustainable design features and gorgeous gardens overlooking the Humber River valley woods and meadows.

John Street Roundhouse - Toronto Railway Heritage Centre
Another spot that is normally open to the public, but it's new the Doors Open this year and definitely worth a visit if steam-powered choo-choos get you going. Hailed by the city as an "architectural wonder", the space is home to the Toronto Railway Historical Association whose mandate is to bring Toronto's railway heritage back to life. You can see the restored Don Station, an original and operational 120-foot locamotive turntable, and 10 restored engines, freight and passenger cars. Then hop on the miniature steam train for a ride. 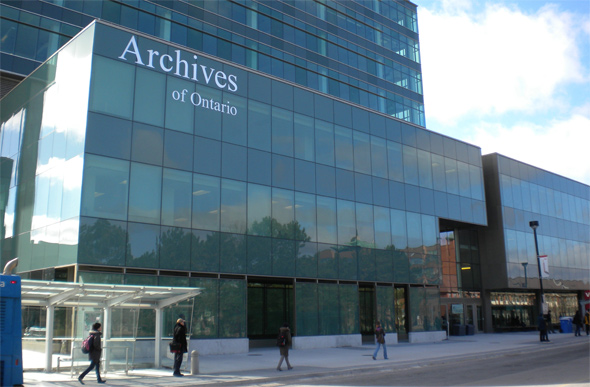 Archives of Ontario
This new LEED-certified facility is home to 2.9 million photographs, more than 85,000 maps, 240,000 architectural drawings and over 40,000 hours of audio, video and film records. At the core of its collection are 100 kilometres of textual records (to give you some scale, stacked up that's taller than 180 CN Towers) dating back to 1729. The building also features innovative climate controls and fire prevention technologies in its vaults to protect the Archives' collection.

501 Adelaide Street East
This building is the newest part of the Regent Park revitalization. It has 180 units (some as big as 5-bedrooms) and includes state of the art environmental technologies like heat recovery ventilation units, high efficiency boilers and a green roof. Architects and city staff will be on hand to answer questions.

And after a season or two on the bench locations like the King Edward Hotel, the Redpath Sugar factory, and the Royal Alex Theatre are back in the rotation.