For those complaining that the media is unfairly giving only the top six mayoral candidates any attention, the Better Ballots mayoral debate about municipal voting reform should be a breath of fresh air. It'll include two outside -- or, if you prefer, "fringe" -- candidates as part of the discussion.

Better Ballots is a non-partisan project of the Toronto City Summit Alliance, and it's hosting an online poll to determine who those two will be. Dave Meslin, the project coordinator for Better Ballots, believes that anyone running for mayor deserves a chance to be heard.

The first round of voting in the Better Ballots poll ended Friday, which leaves five candidates in the running: Sonny Yeung, Kieth Cole, Kevin Clarke, George Babula, and Rocco Achampong. The results of the second (and last) round will be determined Sunday.

The remaining eighteen registered candidates will, nevertheless, be allowed to take part in the debate, with a chance for a one minute speech. And yes, that means even Don Andrews, a neo-Nazi, will be allowed to momentarily share the stage with George Smitherman, Rob Ford, Joe Pantalone, and Rocco Rossi (however it's not clear at present if he'll take part). 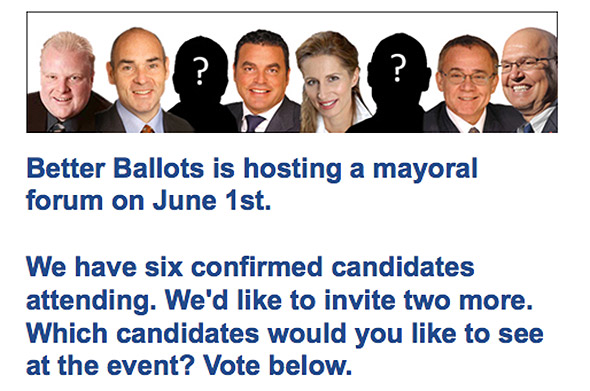 "I've always been in the school of thought of letting anyone speak," Meslin told me. "The worst thing you can do with a movement you don't agree with -- whether you think it's racist, sexist, or homophobic -- is to try to prevent its people from speaking."

Achampong, a former University of Toronto student council president, was the one who inspired the online poll. "He phoned me," Meslin said. "He'd heard of this mayoral debate, and he wanted to know how we were deciding who was in and who was out. I had a really good talk with him, and that was what helped spark this idea"

Meslin admits an online poll isn't scientific, but he told me Better Ballots didn't have the resources to conduct a better survey.

No matter who wins on Sunday, the debate on June 1 should be interesting, and will be a nice break from the predictable pattern of recent debates. Whoever gets this opportunity will be under a lot of pressure to make a good impression because he'll likely not have another chance this big.

Photo of Kevin Clarke by the author. Second image is from the Better Ballots website.